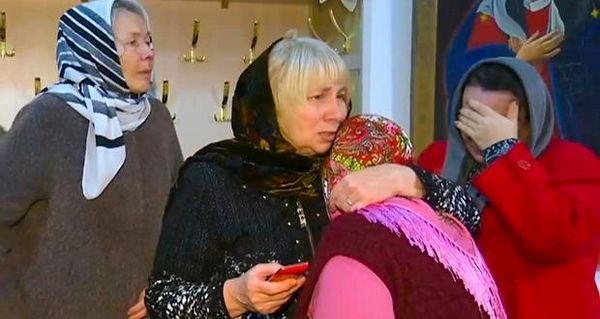 A group of women comfort each other after a memorial service in the Russian Orthodox Church in Kizlyar, Russia on Monday, following Sunday’s gun attack. Photograph: RU-RTR Russian Television via AP

The five women, Vera, Lyudmila, Nadezhda, Irina, and Vera, who were shot and killed outside of the Cathedral of St. George in the city of Kizlyar, in the Russian Dagestan Republic on Sunday will be buried on the territory of the church, the acting head of Dagestan Vladimir Vasiliev said at a meeting with Kizlyar city administration yesterday, reports Interfax-Religion.

“It is very important that the funeral ceremony will be held tomorrow [today] on the grounds of the church,” Vasiliev stated.

Today has been declared a day of mourning in Kizlyar.

According to the republic head, the decision to bury them on church grounds was made by Archbishop Varlaam of Makhachkala and Grozny.

Following the emergency meeting with the city administration, Vasiliev visited the Cathedral of St. George, the place of the tragedy, to lay flowers in memory of the innocent victims, the Diocese of Makhachkala reports. He was joined by Abp. Varlaam and several other public officials. People had already been flocking to the church since the early morning.