The festive ceremony of the transferring of the Ascension mosaic for the inside of the main dome of St. Sava’s Cathedral in Belgrade was held yesterday. The icon was made by a collective of Russian artists under the direction of the People’s Artist of the Russian Federation N. A. Mukhin, reports the site of the Russian Orthodox Church.

The mosaic weighs 40 tons, according to The Hindustan Times. It was largely funded by the Russian energy company Gazprom, and was assembled in Moscow over the course of the previous year.

A ceremony was held earlier in May in which His Holiness Patriarch Irinej of Serbia placed the first stone in the dome, after several mosaics arrived earlier that month. 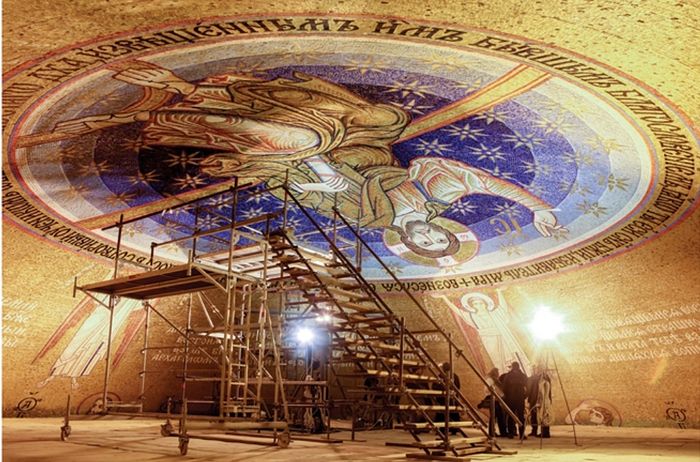 On the Russian side, the ceremony was attended by Minister of Foreign Affairs Sergei Lavrov, who was in Belgrade for the occasion of the 180th anniversary of the establishment of diplomatic relations between Russia and Serbia, Russian ambassador to Serbia A. V Chepurin, President of the Russian Academy of the Arts Z. I. Tsereteli, Gazprom General Director Alexander Dyukov, and other business and diplomatic representatives.

With the blessing of His Holiness Patriarch Kirill of Moscow and All Russia, His Eminence Metropolitan Hilarion (Alfeyev) of Volokolamsk, the Chairman of the Department for External Church Relations, also attended the ceremony, conveying greetings on behalf of the patriarch. Welcoming addresses were also given by Pat. Irinej, Russian Foreign Affairs Minister Sergei Lavrov, President Vučić, and Gazprom General Director Dyukov.

Thanking the Russian Orthodox Church and President Putin for their assistance in realizing the mosaic project, His Holiness Pat. Irinej stated, “The church will be the pride of both Serbs and Russians, as well as Orthodoxy in general,” reports TASS.

“When I again entered under the majestic vaults of the Church of St. Sava on Vračar today, my heart was filled with a sense of deep joy and reverence at the sight of the grand mosaic composition of the Ascension which now adorns the dome of the cathedral,” Met. Hilarion said.

The event ended with performances from the Russian children’s choir “Domisolka” and the Moscow Synodal Choir. In the evening, His Holiness Irinej hosted a dinner for invited guests from Russia and the hierarchs of the Serbian Orthodox Church. "The fates of Russians and Serbs have been intertwined by Divine providence"—Pat. Kirill
“You know, an incredible feeling overwhelms a Russian when they come to Serbia. You don't feel you’re in a foreign country. On the contrary, you feel at home, surrounded by your brothers.” Harold Migias5/4/2021 5:03 am
The dome mosaic is very similar to that in San Marco, Venice and Saint Sophia in Thessaloniki.

Alberto Manuel Arriola Arciniega 2/23/2018 9:08 pm
I am a Mexican disabled poet, in love with Fine Arts and culture.
A true admirer of the great and rich Russian culture. I love the art, painting and mosaics.
Especially, this one installed into St. Savas Cathedral which is truly amazing, beautiful and coloured.
Receive my warmest greetings and best wishes for you.
Sincerely