Looking at the Lenten Prayer of St. Ephraim the Syrian 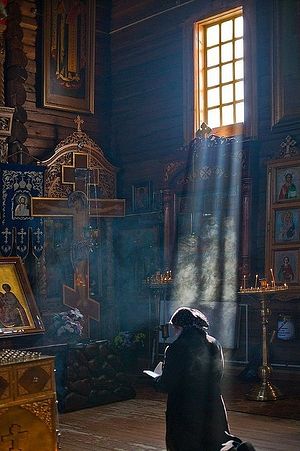 Photo: Ilya Shpagin / Pravoslavie.ru
I cannot be the only Orthodox pastor to have been asked occasionally by my people about the meaning of the Lenten Prayer of St. Ephraim the Syrian. In its (OCA) translation, it reads, “O Lord and Master of my life, take from me the spirit of sloth, despair, lust of power, and idle talk. But give rather the spirit of chastity, humility, patience, and love to Thy servant. Yea, O Lord and King! Grant me to see my own transgressions and not to judge my brother, for blessed art Thou unto ages of ages.”

Most of it is fairly straightforward and easy to understand—although not at all so easy to accomplish. The spirit of chastity, humility, patience, and love present no problem to the mind, only to the will, as does the petition to see one’s own sins and to refrain from judging others. The questions usually arise regarding the first petition, and what is meant by “sloth, despair, lust of power, and idle talk”. Avoiding these sins is difficult enough, but first we have to understand what sins we are striving against. “Sloth” (or “laziness” to give its more usual name) is fairly easy to understand, as are the sins of lust for power and idle talk. We all have temptations to sit around and watch television when we should be praying or working, and temptations to grab for control of things that don’t really belong to us. And of course everyone is all too familiar with the temptation for idle talk, whether the talk be gossip, whining, or complaining. But what, I am often asked about, is meant by “despair”? It conjures up ideas of suicidal depression—a problem certainly, but why is it grouped with such other daily sins as laziness, the itch to control, and to run off at the mouth? Surely such despair is (mercifully) rather rarer than these common sins?

The Greek translated by the OCA translation as “despair” is περιεργίας/ periergia. Orthodox Wiki (that invaluable source for unilingual people like myself who speak no Russian or Slavonic) tells me that the Slavonic renders it ‘небрежεнїѧ/ nebrezheniya, which it renders as “faintheartedness or despondency”—thus, I suppose, the OCA rendering of it as “despair”. But the Greek is very different. (Orthodox Wiki wonders aloud if the difference might be attributable to a different original.) The word periergia comes from the words peri (meaning around or beyond) and ergia (meaning deed or to do). The Liddell-Scott Greek lexicon defines it as “over-exactness in doing anything” and as “intermeddling, officiousness”. Google’s version of the Oxford English Dictionary offers “Chiefly Rhetoric: The use of an excessively elaborate or elevated style to discuss a trivial matter; bombastic or laboured language”. It traces it to the “classical Latin periergia excessively elaborate rhetorical style (Quintilian)” and from the “Hellenistic Greek περιεργίας already in ancient Greek denoting futility, needless questioning, curiosity, superfluous, excessively elaborate, especially of rhetorical style and in sense ‘taking needless trouble’”.

Putting all of this together we get the idea of a desire to show off, to sound off and impress people by putting our verbal oar in when discussing things that are none of our business. This fits better with the other sins on the list, and is much more common than the sin of despair. We often are tempted by laziness, by the itch to control, and by the desire to talk when we should listen. The temptation to show off how clever we are and win arguments often go along with such sins.

What all these sins have in common is the failure to restrain ourselves, the temptation to let ourselves go. I let myself go by sitting around when I should be working or by surfing the net when I should be praying (i.e. the sin of sloth). I fail to restrain myself when I leap in to try to make things go my way when I should mind my own business and take things as they come (i.e. the sin of lust of power). I fail to restrain myself when I whine, complain, denounce, or otherwise opine about things which don’t concern me (i.e. the sin of idle talk). And I fail to restrain myself when I give in to the temptation to dominate conversation, win every argument, and generally show the world how spectacularly clever I am (i.e. the sin of periergia—possibly translated “boastfulness”). Over against such sins, St. Ephraim’s prayer counsels restraint—the alternative way of keeping quiet and patient, of reining in the desire to obtain, defeat, dominate and impress. Sometimes the best thing to say is nothing.

In the Orthodox liturgical tradition the Lenten Prayer of St. Ephraim the Syrian is said many times, usually with prostrations and bows, so that the body prays as well as the mind. The repetition is helpful, for in our secular western culture the successful person is the one who impresses, the mover and shaker, the one who confidently puts himself (or herself) forward and is not shy of expressing an opinion, the one who wins, who dominates, who owns the room. That person is the one who we say “is going places”, and who will certainly end up as CEO or VIP. It is all about self-promotion and self-assertion. Against such a relentless onslaught we need all the help we can get. We can’t say the Lenten prayer too many times. Forbidden Fruit
An explanation of the prayer of St. Ephraim the Syrian, Part 5
St. Luke, Archbishop of Crimea
This great ascetic and desert dweller, St. Ephraim the Syrian, prayed that the Lord give him the spirit of chastity. Could it really be that he had need of that prayer? He considered that he needed to pray for this, and all the saints prayed for this. Why? “Great Lent is a Time of Intensified Work On Yourself”
Met. Onuphry (Berezovsky) The Passion of Ambition (Love of Power), and the Ability to Guard the Lips
St. Luke (Voino-Yasenetsky)

The Passion of Ambition (Love of Power), and the Ability to Guard the Lips
An explanation of the prayer of St. Ephraim the Syrian, Parts 3 and 4
St. Luke, Archbishop of Crimea
Love of power is against the spirit of the Gospel, against the spirit of humility. Nevertheless this passion has a grip on everyone, and there is no one who is not infected with it—even little children.

An Explanation of the Prayer of St. Ephraim the Syrian
St. Luke (Voino-Yasnetsky) Prayer Preserves Chastity
Two Words on Prayer
St. Ephraim the Syrian
Prayer is a preservative for chastity, the training of the soul, the taming of arrogance, purification from remembrance of wrongs, the annihilation of hatred, and the correction of wickedness. Prayer is a fortress to the body, prosperity to a home, beautification to a city, might to a kingdom, a sign of victory in times of battle, and the strength of the world How to Maintain a Prayerful Spirit Throughout Lent?
Pastoral advice

How to Maintain a Prayerful Spirit Throughout Lent?
Pastoral advice
We are now in the fourth week of Great Lent, and many of us feel some cooling compared to the first days due to the hustle and bustle of everyday life. How can we keep a prayerful and focused spirit through the whole of Lent? How can we keep from losing the spiritual fruits acquired in the first days?
Comments
×