Georgian villagers fighting construction of casino next to church 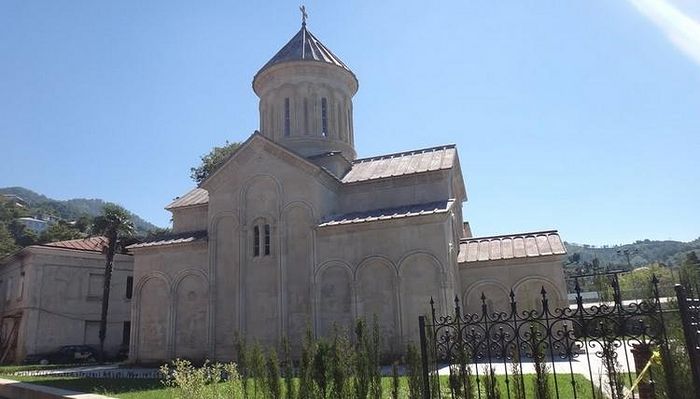 The Church of St. Andrew the First-Called in Sarpi. Photo: spzh.news

Residents of the village of Sarpi in the Adjara Region of Georgia are outraged by the construction of a casino next to the village’s Orthodox church that is already underway. “Give up this godless venture!” the Orthodox faithful are insisting, reports Blagovest-Info.

The local Orthodox population of the village, which sits on the border of Georgia of Turkey, have appealed to local authorities to prevent this blasphemous arrangement. “The church is a holy place, and we mustn’t allow the building of a ‘house of sin’ next to a church,” the faithful assert.

The residents also note that the number of casinos in Adjara has significantly increased recently, which is in the interests of foreign tourists but violates the rights and freedoms of the local population. The Adjara authorities have put a lot of effort into developing the gambling industry in the autonomous region. Adjara is close to the border and Turkey, and also to an airport and train station. These factors, along with significant tax incentives, create an attractive and easily accessible atmosphere for tourists and investors in the gambling business in Georgia.

“We appeal to the authorities of Adjara; give up this godless venture! No budgetary concerns can justify your godless actions! Are there really not enough destitute families and ruined men who are slaves to the sin of gambling?” the message to the authorities reads.

They point to, as an example, the massive casino near the historic Sioni Cathedral in Tbilisi, where the cross of St. Nina is housed. Although the large flock there organized protests against the building of the gambling house, the bureaucratic structures didn’t want to hear any arguments against the project.

“Friends, sober up! Think about what we are doing and why. Will money earned this way become our salvation?!” the parishioners write in their appeal to the Adjara authorities.

The Georgian Patriarchate released a statement a few days ago about how the enemies of the Church seek to entangle it in political games. Such ill-intentioned people find the Church’s conservative stances unacceptable, the statement reads, including the Church’s stance against propaganda in favor of gambling. Lost in the forest. A real story that took place in Georgia
Nikoloz screamed and ran out, crying: “The icon began weeping and speaking to me! She has said such things to me… Woe to me, a wretched man, and unto all those who are desecrating the house of God!”
Comments
×