“The Mother of God Ran Us Through a Sieve” 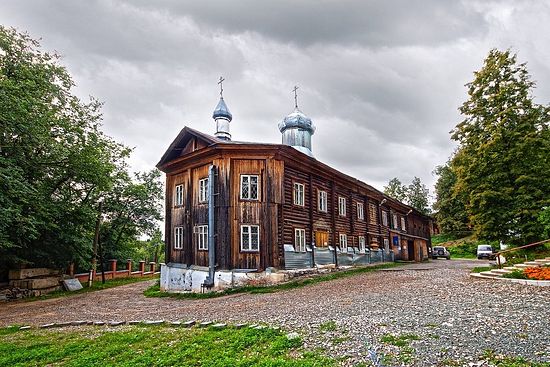 Sts. Seraphim and Alexis-Kazan Mother of God Convent was a luminary of pre-revolutionary Perm for the Orthodox—it knew the narrow path of tribulation and persecution. It was closed and ruined, but it stood, like a house built on rock, not on sand.

In 1863, a merchant widow Nastasya Bakhareva founded a women’s community in the outskirts of Perm, in a wonderful, beautiful corner of the Perm Region, in memory of her dearly beloved husband. The community had to go through many trials and tribulations before the foundation of the first monastery church was laid in 1907 in honor of the Kazan Icon of the Most Holy Theotokos, and in 1908, the Holy Synod announced the transformation of the women’s community-almshouse into a cenobitic monastery. They were allowed to recruit as many sisters as “the monastery was able to support on its own funds.”

“Indeed, wondrous is the terrain and enchanting the view from the mountain… it brings involuntary fear and amazement from the greatness of the terrain, wondrous in all respects. It has been preserved by the Creator Himself, and has finally seen its destiny,” wrote Hieromonk Seraphim (Kuznetsov), who did a lot of good for the youth of the monastery. 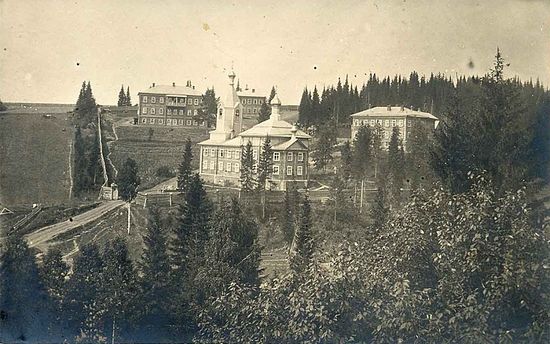 There are healing springs near the monastery—four altogether: of the Kazan Icon, the Holy Protection, St. Seraphim, and St. Nicholas the Wonderworker. The pond, bordered by coniferous and deciduous trees, a birch grove, and the amazingly clean and fresh air are a huge spiritual library. The monastery attracted sisters who were looking for spiritual growth—in 1913, there were 202 nuns laboring there. The monastery grew and matured and could already take up works of charity and mercy, freely feeding pilgrims, and donating to Church schools, an orphanage, and the building of churches.

In 1921, the monastery was closed, and a children’s tuberculosis sanatorium was placed in its buildings. The new authorities ordered the able-bodied sisters “to used strictly for work and the service of the sanatorium.” The elderly and disabled were sent to a nursing home. The icon, weaving, and carpeting workshops were closed, but the tin workshop found use—they ordered that it immediately be used for the manufacturing of spittoons.

The Kazan Church wasn’t closed yet, and services continued in it, and there was such a large influx of pilgrims that, according to the authorities, “it tore the nuns from their main work.” Then they put forty cots for the sick in the church, and later converted it into a detox center. Such thoughtful masters...

Many nuns served time in the camps, and returned after the camps and exile. They united around their pastors: Archimandrite Tavrion (Batozsky) who was freed from the Vishersky Gulag, and Schemahieromonk Andronik (Lukash) who served at the old cemetery church of the Dormition. 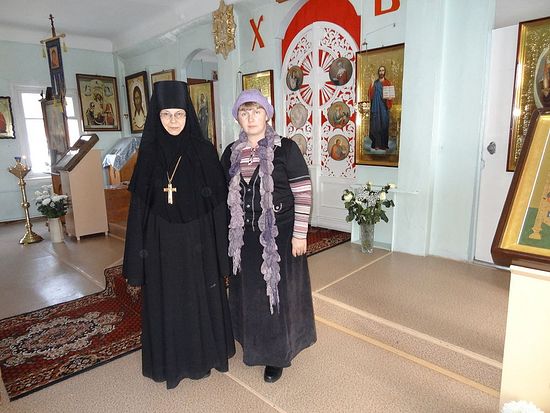 The rebirth of the monastery began in 1998. We were fortunate enough to have a conversation with Mother Sophia (Zaburdaeva), the abbess of the monastery, and her narrative reflected all the traits of modern female monasticism:

Mysterious are the ways of the Lord. I had a very pious mother, but I was so-so… When my mother died, I had to go to church to order a memorial and to hand in prayer lists—it’s not that there was a desire, but the Lord led me. He authoritatively took me by the hand, as a child, and led me. My son had turned thirteen, and I took him with me to the service. I was gradually drawn in.

My mother was my first friend, and I wept, asking the Lord to send me someone to whom I could open my soul, as I once did to my mother. And the Lord answered my prayers—I found a spiritual father, Archimandrite Stephen. 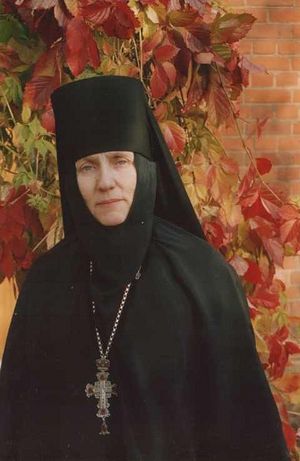 Abbess Maria (Borobeva) of the Perm Dormition Convent
My spiritual father introduced me to the future nun and abbess of the convent, known to everyone in the Perm Region, Matushka Maria. She was still in the world then—doctor and professor Valentina Vasilievna Vorobeva, but she lived a monastic life. Some friends brought her to my house with the blessing of Fr. Stephen, because I was seriously despondent—I had left the world, but hadn’t yet arrived anywhere.

I was glad to have this guest. I fried some chicken, not knowing that she already didn’t eat meat. She didn’t eat the chicken, but asked for some kefir. We sat and ate. My son, Vanechka, was in another room watching TV. She spoke to me about God, and I thought, “She is a doctor and professor—how can she be a believer?!”

Valentina Vasilievna invited me to her place, so I went. Many young people would gather at her place then. When the Dormition Monastery in Perm began to be reborn in the mid-1980s, Valentina took the monastic tonsure and then became the abbess of the monastery. I tried to visit the monastery often. I would cook, clean, and sew—after work, at all the feasts, on weekends. It started to feel like that was my place.

My son grew up and got married, a grandson was born, and my time came to leave for the monastery, to Bakharevka, to Mother Rufina, the abbess of the monastery. I have labored in the monastery since 1998; I was the dean (blagochinnaya), and now I am the abbess.

Several young sisters came to the monastery at one time—it was the call of the grace of God. People can easily respond to something new: Monasteries opened, and they came. They tried out this new thing, and they stayed—not all of them, but only the elect, whom the Most Holy Theotokos herself chose.

Why do some leave the monastery? Some can’t endure one another, and they can’t humble themselves. Some came earlier, advanced further in the spiritual life and were in charge of obediences, and those who came later had to listen to them. It’s difficult to obey those who are younger, who are less educated, but monasteries have different indicators of success—a career in the world is not always beneficial for the spiritual life.

They leave because they cannot bear the external burdens of monastic life—they were accustomed to comforts in the world, and it’s difficult to tolerate the lack of amenities. It’s difficult to stand in prayer at night. Monasticism is an ascetic labor. Not everyone is ready for this labor. The initial grace retreats, and their infirmities come to light. God is the same, but people have become weaker…

People leave because of selfishness and egotism—we love ourselves very much, and there’s no self-sacrifice. We fear difficulties and we flee from them. “Oh, it’s hard, it’s dirty—I’m going somewhere were it’s easier.”

When I went to the monastery, I thought I was ready for monastic life: sewing, knitting, cooking… Only years later did I realize that I don’t know how to do anything and I don’t know anything. Socrates said: “I know that I know nothing.” Me too…

It was very hard at first: I had to get up earlier and go to bed later than in the world, spending the whole day on my feet… And a lack of humility—you have to humble yourself before everyone and love everyone.

There was no firewood, the entrance to the monastery was in bad shape, it’s on a mountain, we carried firewood in our arms to stoke the furnace. We had to get up early to cut hay. There was no bathhouse, so we built it with our own, womens’ hands. I had not only to sew, but also to dig and plant. The Lord and the Most Holy Theotokos greatly helped—there was strong zeal. Fatigue gradually built up, and the temptation to leave appeared: 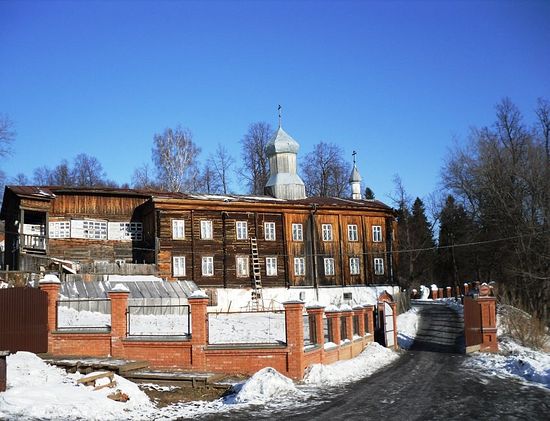 The eldress prayed for me, and the tempting thoughts left.

Now I am happy that I crossed the threshold of this monastery—ancient and prayerful, although ruined and desecrated. The first time I came here, novices washed the porch. I took off my shoes outside and went without shoes. “Why’d you take your shoes off?” I could feel the grace of this prayerful place. Put off thy shoes from off thy feet, for the place whereon thou standest is holy ground… (Ex. 3:5).

Looking back, I can see that there were many difficulties and temptations. The Mother of God ran us through a sieve—various people came and left, and each one had their own habits, weaknesses, and sorrows. You begin to labor in asceticism, and your passions come out and appear. Sometimes you don’t even expect it from yourself… But you know that you can turn to the Lord for help, and the Lord will not put you to shame.

There was a fire in 2002… But there was also consolation—in the very epicenter of the fire, the icons remained untouched—the Kazan Icon of the Most Holy Theotokos on the analogion, and a paper icon of the Burning Bush. The wooden case was completely burned, but the icon itself remained untouched by the fire and shone with bright colors. A reliquary with particles of the relics of fifty-four saints was saved. It was a miracle…

Mother Rufina was transferred in 2009, and I became the abbess. It was scary. I was one of the sisters—we ate from one spoon, and now I’m the matushka, and I answer for everyone… I gradually got used to it—the people, the building, the spiritual life, the prayer. If not for the grace of God…

By what miracle did our monastery grow? Have you read about the Optina elders? Fr. Moses began construction without a penny in the monastery treasury, and the Lord sent the means. I thought, “Well he was St. Moses. And who are we?! Can we really be like him?!” And then, the Lord inspired me and I said, “Sisters, let’s build!” “What’s wrong with you, Matushka? We have absolutely no money! What can we build with?” “The Lord will help!”

We began to build, without a single penny! Here someone donated bricks, there someone brought us wood… and construction moved along! I asked the nun-treasurers: “How much have we spent on construction already?” “Eight million, Matushka!” “How?! Where did we get so much?” “Yes, I don’t know either… You said the Lord would send what we need! And He sent it!”

It brought us to tears… We’re not like St. Moses of Optina, but the Lord is the same, yesterday and today… 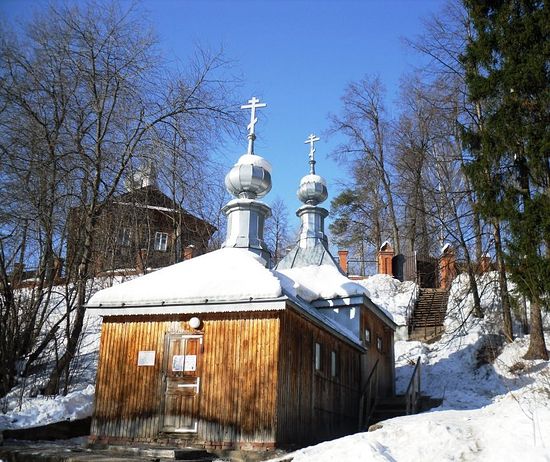 Chapel of the Kazan Icon of the Mother of God

We have miraculous springs. Many young people would come and complain that they have no children. They would go to the holy springs, dip in, and pray. Maybe a year, or half a year would go by and they would come again: “Matushka, we’re expecting a baby!”

One couple was crying about not having any children. They went around to all the springs, praying. Now they already have two children—Sophia and Kirill.

If you’re ever in Perm, come see us! May the Lord save you! May God help all of your readers! “Charity, Mercy and Compassion Are the Reflection of Our Love for God and People”
Abbess Athanasia (Silkina)

“Charity, Mercy and Compassion Are the Reflection of Our Love for God and People”
Abbess Athanasia (Silkina)
Nowadays monasteries and convents are as relevant as they were in ancient times, if not more. These places are filled with the Divine grace. They are essential for people, so that driven and tossed by all kinds of winds in the turbulent sea of life, they might have such islands where they will find Divine grace and support. “I Feel Warmth Coming From Some People”
Mother Mariam (Mikladze)

“I Feel Warmth Coming From Some People”
Olga Rozhneva, Mother Mariam (Mikladze)
We’re walking around the center of old Tbilisi—the abbess of the Monastery of the Transfiguration of the Lord, Matushka Mariam (Mikladze), is waiting for us to come.
Comments
×