The Word of the Patriarch The existence of Russia is of a great spiritual and cultural value – not only for you and me, but for all humanity. And we are calling for the preservation of the people of Russia, for the birth of our new compatriots, not only and not so much because these people are needed by the country, but also to a great extent because this country is needed by people. Russia must exist and play its irreplaceable role in our destiny with you, in the destiny of our descendants and throughout world history.

The special value of Russia, its special vocation is to be a stronghold of Orthodox Christianity. To oreserve the Orthodox faith, Orthodox tradition and culture, Christian moral principles intact. Maybe that is why the powers that be are so ganged up on the Russian Orthodox Church, wanting to tear away the Greek Orthodox world from the Russian Church, wanting to destroy the unity of the Orthodox Church. We possess reliable information that everything that is happening now in world Orthodoxy is not an accident, not just the whim of a religious figure whose mind has become clouded. This is the implementation of a very specific plan that aims to tear the Greek world away from Russia. According to the perpetrators —I cannot describe these strategists in any other way — the Russian Church appears to be some kind of “soft power”, through which Russia influences the world around it. But why can’t Russia share its spiritual gifts? Is it criminal? This can be criminal only in the view of those who seek to weaken, and if possible to destroy the influence of Russia. In this whole story related to the problem of recognition or non-recognition of Ukrainian schismatics by the Local Orthodox Churches, there is something that is not declared, but which is the main goal of the forces behind the scenes that unleashed this schismatic activity. We in the Russian Church understand this clearly, but today our brothers in Greece and other Orthodox Churches also understand this. We are being asked to resist, not to flinch, to continue the struggle to maintain the spiritual independence of the Russian Orthodox Church from all these centres of world influence, and most importantly – to maintain the unity of Universal Orthodoxy. 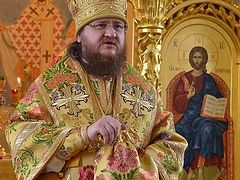 “If the Phanar Continues to Systematically Split Orthodoxy, Then Anything Can Happen”
Abp. Theodosy (Snigiryov)

“If the Phanar Continues to Systematically Split Orthodoxy, Then Anything Can Happen”
Archbishop Theodosy (Snigiryov) of Boyarka
If for foreign Orthodox philocatholic hierarchs, their drift towards the Unia seems conscious and long-desired, then they will lead our schismatics from the OCU there on a short leash, without asking their opinion. 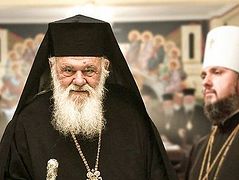 “They Will Not Destroy Greek-Slavic Friendship”. The Russian Holy Synod’s Statement of October 17, 2019 on the Ukrainian Issue and the Greek Church

“They Will Not Destroy Greek-Slavic Friendship”
The Russian Holy Synod’s Statement of October 17, 2019 on the Ukrainian Issue and the Greek Church
“We cherish prayerful communion with our brethren in the Greek Orthodox Church and will maintain a living prayerful, canonical and Eucharistic connection with it—through all those archpastors and pastors who have already spoken out or will further oppose the recognition of the Ukrainian schism.” 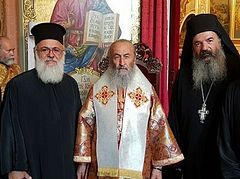 A Message of Love in Christ and Orthodox Brotherhood. Three Greek Clerics’ Support for the Ukrainian Church and Appeal to the Hierarchs of the Greek Church

A Message of Love in Christ and Orthodox Brotherhood
Three Greek Clerics’ Support for the Ukrainian Church and Appeal to the Hierarchs of the Greek Church
On September 22, three Greek priests concelebrated with His Beatitude Metropolitan Onuphry of Kiev and All Ukraine. After the Divine service, they congratulated the primate of the UOC and conveyed to him the disquiet of the Orthodox clergy and laity of Greece about the crisis within Orthodoxy in connection with events in Ukraine.
Comments

Landen3/23/2022 5:32 am
I am comforted every time I am reminded that Christ's kingdom is not of this world. With Russia and Ukraine both committing war crimes, no one can consider either country saintly, especially with the iron-fistedness of Putin and Zelensky. But despite politics, my heart aches, all of our hearts ache. We want this war to end, we want the bombings from both sides to stop, we want peace again, which is disturbing not only the material realm but also the spiritual. But the question I ask, not intending to be divisive but just requesting a comment so I may perhaps contribute, what is the orthodox church organizing to assist the people displace and affected by this war? What is being done for the lost souls who are broken and require the consolation of a man vested by the holy spirit?

Joseph Clark3/20/2020 9:19 pm
I know my observations are going to be viewed as disrespectful. The statement of the Patriarch is worth reading and I'm glad it was translated; however, sadly, some of the comments below it show an appalling level of spiritual immaturity and even basic civility. Take the case of Justin Niebergall, a man who is outside of the Church, yet feels a pull to come into an Orthodox forum and is filled with respect and admiration for the Church. After expressing his sincere desire for a healing of the divide between the Church and the Roman Catholic Confession, he is met with coldness and insults from the "Orthodox." This very pattern is a major contributing factor to the lack of growth and poor conditions in Orthodox parishes in the United States. Even when people who are positively disposed towards us walk through our doors, we do everything possible to make them leave hating us, as opposed to establishing a relationship and praying that they would come home to the Church. St. Silouan says that love of enemies is the proof of the Holy Spirit. How about civility towards those who love us?

Sebastian54110/31/2019 4:44 pm
"The first few chapters of Acts reveal this unity under Peter." - You can say they reveal how important Jerusalem was, so clearly Patriarch of Jerusalem should be a Pope. But obviously not a pope in a RC terms, because that's literally anti-biblical, we both know that very well. Coptic Pope of Alexandria is the closest to what a pope should be for his flock, nothing more. And certainly not someone who can derail whole church and tradition, like it's happening right now in Rome - those are the fruits of terrible papism doctrine, which wasn't there for first few HUNDREDS of years of Christianity (which you also know very well if you ever read history book on Christianity...), and we all know what Jesus said - you will know them by their fruits. So yeah, we KNOW papacy by it's fruit by now, after thousand years. Papacy, priests, whole roman church systemically hiding pedophilia and shuffling clergy around the parishes to hide it... Oh boy, do we KNOW RCC by it's fruit :D

Michał Wiśniewski10/31/2019 4:33 pm
"If you believe in "Thy Kingdom come, thy will be done, on earth as it is in heaven," then you believe defacto in a papacy, because heaven is a papacy under God the Father." - this might be the dumbest thing I read so far in the comments, ever. Papacy is not a problem, because there always was a "director" to shuffle people around, it's the absolute power that pope wants to claim that is a problem, because it never was the case in early Church, ever. And comparing pope to God must be an anecdote, otherwise you have some seriously heretical views, even for a roman church member. Papacy in the roman form was created for sole purpose of political power, nothing else, literally NOTHING else.

ACatharina10/31/2019 11:43 am
Justin Niebergall: you probably heard about Vatican's amazon statue scandal. I'm a catechumen of the Orthodox Church with RC background and let me tell you, the RC "church" has no Spirit. There's nothing in it, it's the white washed tomb, the withered branch and they prove it more and more often, by absurdities like keeping pagan statues near their altars and by supporting pathologically inclusive "peace-making" policies authored by foreign think tanks... Hope you will see the emptiness of roman catholicism soon. May you find the right path, because the papal one leads to a dead end.

Justin Niebergall10/30/2019 7:55 pm
Samuel: I don't believe that to be true. Orthodoxy had unity with Rome before, it can happen again. The first few chapters of Acts reveal this unity under Peter. Christ commands it. Furthermore, Orthodoxy has their own form of "unofficial" Papism within itself because even in Holy Synod, one man alone will tip the balances one direction or another. If you believe in "Thy Kingdom come, thy will be done, on earth as it is in heaven," then you believe defacto in a papacy, because heaven is a papacy under God the Father. In heaven, saints cast their lots, but the Father chooses to ratify or shelve their petitions.

Maria10/30/2019 6:24 pm
I am happy to hear the words of Patriarch Kirill and how determined he is to hold the Orthodox Church and faith in tact and more importantly in Truth! At the same time, I recently became Orthodox and am not aware what exactly is causing this possible schism other than the above mentioned lack of moral teaching. I came from the RC Church and they are walking on very thin ice with the immoral activities going on - in the hierarchy and elsewhere.

Afanassy10/30/2019 5:45 pm
To Justin Niebergall - - 1) The proper term for the Church of Rome is the Roman Catholic Church (RCC), not the "Catholic" Church, which is presumptuous and ambiguous. 2) The ROC can establish unity with RCC only when the latter foregoes its heresies and modernism, -- and restores its pre-schism beliefs and practices. =================

Joseph Lipper10/30/2019 5:49 am
What does Patriarch Kyrill mean, "We are being asked... most importantly – to maintain the unity of Universal Orthodoxy."?

Justin Niebergall10/29/2019 11:16 pm
As a Catholic (I don't like term "Roman Catholic") who believes in a necessity for the Papal office, I am quite jealous of the way the Russian Orthodox Church operates. They defend the faith like warriors, while Rome opens the floodgates to theological thought, which in turn creates confusion. My greatest desire is to see the ROC establish unity with Rome, that like St. Paul, respects the office but graciously condemns their sometimes dubious actions.

Daniel Lastone10/29/2019 7:19 pm
I am a new comer,the last convert, but I love Ortodox Church and I will always remain loyal to the Rocor, to the Russian Church, and also I respect very much all Holy Orthodox Hierarchs, first Patriarch Bartholomew. I love very much holy people, I try to learn from them. Whith much respect y dare to say that our world needs nowdays very musch the spiritual orthodoxes treasures, and also that our Orthodox Church needs more spiritual and moral leaderships than canonical control. I follow Holy Sophrony mind: I am not russian, I am not greek, I am Athonite. Any way let's keep praying for the unity of all, for the peace of all, for the salvation of the world. Please pray for poor Daniel

Fr Patrick 10/29/2019 2:12 pm
Christians who hold to the traditional teachings of the Church, particularly in the area of sexual morality, have long been targets for the West's self-described 'cultural elites'. Often they are enabled from within by those who place the praise men over faithfulness to Christ. Thank God for such strong and wise words from Patriarch Kirill. They are much needed in these dangerous times.
×