A Miracle on the Sunday of the Prodigal Son

One autumn day, I was on duty in the cathedral. Having finished my duties, I locked the altar and headed off to where they sold candles to leave the keys. In the half-empty church a middle-aged woman was sitting on a bench. She stood up as soon as I appeared: 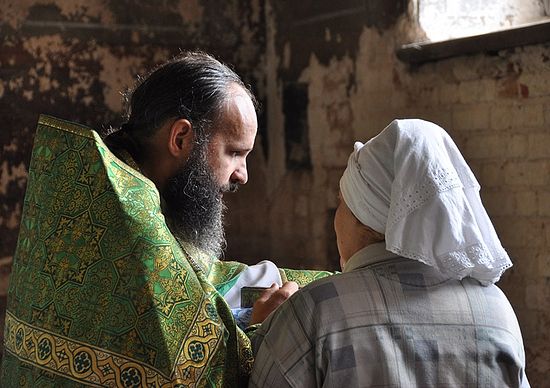 “Father, may I speak with you?”

We sat down on the bench. Based on my short experience as a priest, I realized that the conversation would most likely be about children. Ninety percent of problems that a priest has to deal with when talking with people concern family relationships. This case was no exception.

“My younger daughter is troubled,” the woman began with a sigh. “She is a real mess. She is a good person, modest and pretty, but she’s got a weak will and is easily influenced. It all began at home, in our village. She got involved with a guy, had his baby. Of course they broke up after that. Lately, she’s gotten totally out of control. She moved to Volsk1 to live with another boyfriend there. The baby is with us… They spend everything they make on beer and cigarettes… She has no desire to listen to me and her father. Who knows, she might not even have anything to eat there.”

The woman fell silent for a long time. She just sat there, fatigued.

“I didn’t bring her up properly. I spoiled her, she was my favorite daughter. And this is what has become of her. What should I do? Should I help her? And how? Please tell me.”

“You should definitely help her,” I said. “First and foremost, give her as much love and attention as you can. Go visit her in Volsk as soon as possible, try to visit her as often as possible so that she can see that she is wanted and loved by her parents who want her to come back home.”

“And how about money? Should I support her financially? As I said, she might have nothing to eat now.”

“Of course, better not to give her money. As for groceries, bring them to her as often as you can.”

“Father, there’s another problem that worries me. Once my elder daughter (who lives here in Saratov) found out that I am helping the younger one, she started scolding me. She resents me, perceives my helping her sister as a personal insult. She turns into a different person. They’re sisters after all! Why does this happen?”

“Have you ever read the Parable of the Prodigal Son in the Gospel?” I asked.

“No,” the woman said, shrugging her shoulders.

“Do read it. It’s in chapter 15 of Luke’s Gospel. It describes your case. In this parable, the younger son returns home. Let’s pray that the same will happen with your daughter.”

Several months passed after that conversation. This past Thursday, I was leading a meeting of our youth group. A few days before the Sunday of the Prodigal Son, we analyzed the corresponding parable.

“It’s amazing how closely events in the Gospel can sometimes intertwine with our daily life,” I said at the end of the lesson. “When their younger siblings get into trouble, older children quite often behave exactly like the eldest son from today’s parable, instead of helping and supporting their parents. I can remember one time…” And I told them about the conversation I described above.

The lesson had finished. Young people came up to me to ask questions and receive my blessing. Among them was Anastasiya, a member of our Holy Trinity Cathedral, a very sincere and kind young woman. She had been attending our classes since September.

“Father, this story is about me. I’m the elder daughter you’ve just spoken about,” she said.

I didn’t think much about her words, and assumed that she was speaking figuratively.

“Will you be serving on Saturday?” she asked.

“My mom has come to visit. She and I will come together.”

“Okay. Wait for me after the service. We’ll talk.”

The Vigil was over. The hymns for the Sunday of the Prodigal Son were still echoing in my mind. Having taken my epitrachelion and cuffs off, I left the altar. Anastasiya and her mother had been waiting for me in the church, as we’d agreed. Her mother looked familiar.

“Father, we spoke back in November,” she said when we walked over to the window to speak. “Do you remember? I had problems with my daughters then, just like in the Parable of the Prodigal Son...”

I was dumbfounded. I could see a fantastic mosaic of destinies and events coming together in my mind.

“My younger daughter has returned home. She’s living with us again. She seems to have almost broken up with her boyfriend.”

“How does Anastasiya react when you help her sister?” I asked her.

“She seems to be changing. She is working on herself, though it’s clear that it isn’t easy for her.”

“Last Thursday I accidentally taught her quite a lesson… She will probably understand everything now. I told her about our talk last autumn without knowing that she was your elder daughter. See what kinds of miracles can happen!”

“It’s true! My daughter Elena is currently taking her end-of-term exams in Saratov. God willing, we’ll all be here together tomorrow.”

The Liturgy was being served. Deacon Ilia was reading the Gospel about the Prodigal Son. As I listened, I thought about this mother and her two daughters standing in the church, while the Lord through the words of the Scripture was telling them about their conduct and the events they had recently experienced. What a miracle!

After the service, I went out of the altar. The whole family met me there. Only their father was missing.

“Father, allow us to introduce our Elena,” the mother said.

In front of me stood a pretty young woman with a baby in her arms. I had imagined her to be completely different—I had expected her to be an impudent, provocatively dressed girl. In reality, Elena turned out to be a very modest person. After everything she’d been through, she looked as if she’d quietened down.

I blessed them and congratulated them on receiving Holy Communion. Stepping off to the side, we talked for a long time. Then Elena and the mother left. (Before they left, I had asked their permission to write about these events, which they approved).

Anastasiya and I continued our talk.

“Did you understand what a lesson the Lord taught you?”

“You need to understand that you are sisters, and you should help and support each other.”

“It’s all clear, father. Of course, it will take a lot of effort for me to change… Elena is very indecisive. She needs someone to take her by the hand and guide her through life. Many may take advantage of her. She needs someone loyal and reliable near her.”

“Then you be with her. Take her by the hand and guide her.”

“All right. I will be with her and keep an eye on her.”

This is the story of how, on the Sunday of the Prodigal Son, the Lord gathered this family together in His church: a happy mother, whose child was dead, and is alive again; and was lost, and is found (Lk. 15:24). The younger daughter, who returned to her father’s house from a far country (Lk. 15:13), and the older sister, who realized the ugliness of her behavior. And for some reason He made me a witness of this miracle.

1 A port town on the Volga River in the Saratov region. The Prodigal Son on the Path to Great Lent
Sermon on the Sunday of the Prodigal Son
Priest Ioannis Fortomas
We seem to repeatedly flow from one pattern into the other. These are the passions—they nag at us, they work within us, they pull us in a certain direction; and we must not think that repentance is a magical aﬀair. Of course, the Father accepts us into the former glory, but does this preclude our return to that far oﬀ country of sin and death? Mother Elizabeth3/5/2021 10:47 pm
Thank you for sharing this very very real and relevant family relationship story of Father Dionisy. As a monastery and teaching music, we try to help through both prayers and the music we share. The newer science confirms learning something new helps create new pathways in the neural network of the brain. Using these newer pathways helps to solve problems. Visit us at www.NewTikhvinSketeoftheHolyMotherofGod.org
×