A Humble Heart Sees No Enemies

His Eminence Metropolitan Athanasios of Limassol continues his consideration of the true meaning of humility, according to the teachings of St. John Climacus, as found in his spiritual classic, The Ladder of Divine Ascent. All quotes from The Ladder are taken from the Archimandrite Lazarus (Moore) translation published by Holy Transfiguration Monastery. The second property is the loss of all bad temper, and modesty at its appeasement (25.7).

After we come to love dishonor and sorrow, how can we have anger? We’re no longer angry because we don’t make any claims to anything. Someone comes and reviles us, but just say: “Be blessed!” They treat us unfairly—“May it be blessed!”

I remember how once some people tried to frighten one Athonite elder, saying they would write about him in the newspapers because a girl had gone to see him; she then became a nun and was his spiritual child. Her parents came and said:

“We’re going to write about you in the papers, that our daughter had an affair with you and you seduced her to become a nun!”

“Well, come on, do it; it’s nothing. It doesn’t bother me. It’s like if you took a corpse and shot at it! Nothing will come of it. I’m dead, my child. If you take me to the square and bring all the people to spit at me, nothing will stir within me. Or bring everyone to praise me—it’ll be the same. That is, whether you spit on me, praise me, kill me, or revive me—it doesn’t matter to me, because all of this is dead for me. I’m not concerned about it.”

One day a disciple of Elder Sophrony (Sakharov) came to him and said:

“Geronda, I have fallen into the very abyss, I’m dying. I can’t get any lower—I’m at the very bottom!”

The Elder smiled and said to him:

“Don’t torment yourself! You’re stepping on my head!”

The third and highest degree is a true distrust of one’s good qualities and a constant desire to learn (25.7).

That is, doubting everything you do, and knowing that what you do is no good if God doesn’t approve of it. 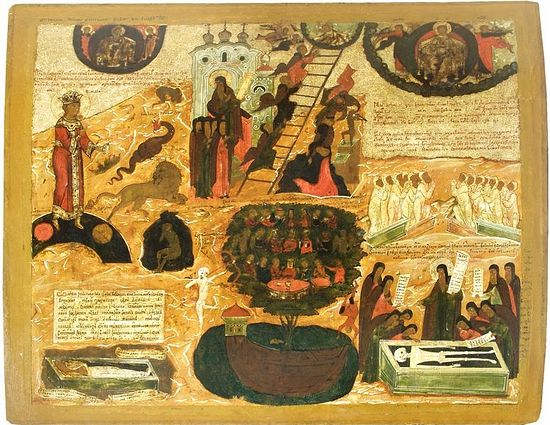 St. John with the Ladder

In the lives of the saints, specifically in the life of Abba Dorotheos, it says that there was a novice in his monastery named Dositheos who showed complete obedience and said to himself: “I’ll ask the elder. Let him tell me, for example, how to sing.” A thought answered him: “Why are you going to ask him? He’ll answer like this and that. You already know his answer: ‘Do so-and-so.’” But he still went and asked him:

“Geronda, how should I sing?”

And indeed, everything was as he imagined it. And a thought said to him: “Well, do you see, the Elder told you the same thing?” He replied: “Yes! But this was from the Elder, and the other from you!”

Perhaps externally it’s the same thing, but the source from whence it comes is different. That is, this man renounced all faith in his virtues, instead relying on the seal of obeying and inquiring of his spiritual father.

However, here I’d like to make a clarification about what has been said. It doesn’t mean we turn into spineless beings and just stop thinking, as if everything we think is sin and condemned. No! This is an extreme, and it’s evil. The other extreme is to believe that everything we do is true, perfect, and sound. (The first is to say that everything we do is a mistake). Both extremes, as St. John says here, are from the demons, not from God, and we must keep to the middle path.1

Then the holy father says that

In other words, it’s one thing to have pride: This is the final limit of egotism and self-conceit—it’s all outside of God, outside the person who spiritually labors. It’s another thing to not be proud and to avoid pride, and a third to humble oneself. And the holy father names three symptoms:

One person may be always judging others; another does not judge others, but he does not condemn himself; a third, although he is innocent, is always passing judgment on himself (25.18).

The proud man easily judges. That we have the spirit of condemnation is a sign of pride, because if we acknowledged our impotence and were aware of our sins, we wouldn’t have the desire to judge others. Therefore, if we see that we are judging, it means we suffer from the disease of pride.

The second doesn’t judge others. He doesn’t exalt himself, but he also doesn’t judge himself. He doesn’t say: “I’m sinful and I’m the cause of evil. I’m thrice cursed,” but he also doesn’t say that others are evil. He neither judges nor condemns himself. That is, he’s a very good person, in the social sense. He neither judges nor performs any spiritual work within himself.

And the third is blessed and delivered from condemnation, by constantly condemning himself. This is a man who always says: “I’m to blame and I’m the cause of my evils, sins, and infirmities!”—but he always harbors hope and thus finds freedom in his soul. He doesn’t accuse anyone and doesn’t argue with God. He doesn’t argue with people; he doesn’t even argue with himself, but accepts himself with humility, and so goes and falls at God’s feet, weeping and entreating God’s mercy. It’s like a man who considers himself defeated, falling at God’s feet and seeking pity and mercy. This is the spirit of a humble man.

He who has got to know himself by discerning each feeling of his soul has sown on earth; but those who have not thus sown cannot expect humility to blossom in them 25.28).

That is, when a man understands himself, he becomes like the man the Lord speaks about in the Gospel, the sower who sowed seed on good ground and will therefore certainly bear fruit at a certain moment.2 Humility will not flourish in a man who doesn’t sow this way.

He who has come to know himself has obtained an understanding of the fear of the Lord; and he who has walked by the aid of this fear, has reached the door of love (25.29).

That is, the humble man can truly love others. Often spouses, mainly wives, complain that their husbands don’t pay attention to them, don’t love them, and that they feel undervalued. And husbands often complain that their wives are jealous and want them to say tender words to them every day, and so they become annoying and boring, and the relationship is damaged.

I remember how I told a husband one time:

“Say nice, tender things to your wife, full of praise; acknowledge her virtues, the delicious food she cooks, praise her that the house is clean—it won’t hurt!”

I even told him:

“It doesn’t hurt to say some untruth! Not a lie, but just praising her more than necessary. And don’t worry: She won’t realize that you’re lying. She’ll like it; she won’t be offended!”

However, this husband was horrified by my words:

However, know that a humble man is he who becomes all things for all men, as said the holy Apostle Paul: I am made all things to all men, that I might by all means save some (1 Cor. 9:22). In other words, in order to comfort my brother, my neighbor, my husband, my wife, I became what they need. If he needs praise, I praise; if he needs tenderness, I become tender; if he needs support, I become a support; if he needs a struggle, I become a struggle!

A young man asked an elder:

“Father, I’m planning to become a monk. What must I do?”

“Learn to wallow at the feet of all others, and you’ll find peace.”

That is, become a carpet for everyone else to walk on, and if you succeed—not because you’re psychologically ill but because you love God and because this virtue has an eternal dimension—then you yourself will find peace, and you will give peace to others.

So, if we grasp this, in marriage for example, so that we give ourselves to another to whatever extent the other needs us, then we’ll find rest.

“But, Geronda, how do you instill peace in everyone who comes to you? After all, they all find consolation; all leave joyful!”

Even the most encumbered people would depart from him joyful. And he replied:

He had no objections, and what was the result? Everyone around him found peace, everyone was comforted, because this elder killed his desires and became all things for all men.

If we do this, sensing God’s love, with true humility and full awareness that we are humbling ourselves not because of an inferiority complex or mental illness, but for the sake of love of God; and if we understand that our humility has an eternal dimension, then everyone will find peace with us.

Let us be at peace with all, and we won’t consider anyone guilty; no one will be our enemy. Even if everyone wants to destroy us, we won’t have a single enemy, because a humble heart doesn’t see any enemies before it—its only enemy is its own egotism… For There to be Elders, There Have to be Novices
A Talk with Hieromonk Isaac of Optina, Part 1

For There to be Elders, There Have to be Novices
A Talk with Hieromonk Isaac of Optina, Part 1
EHieromonk Isaac (Gusev)
Eldership, as I see it, implies two aspects.