Philadelphia Flyers defenseman Ivan Provorov has found himself the object of both praise and scorn after he took a stand for his Orthodox faith earlier this week.

The PA hockey team held its annual Pride Night on Tuesday, with players wearing LGBTQ-themed warmup jerseys and wielding rainbow-taped sticks. However, Provorov was noticeably absent from the pregame routine (though he did join his teammates for the game itself).

“I respect everybody’s choices,” Provorov told reporters after the game, reports National Review. “My choice is to stay true to myself and my religion. That’s all I’m going to say.”

While the Flyers organization issued a statement affirming its “commit[ment] to inclusivity” and pride in “support[ing] the LGBTQ+ community,” head coach John Tortorella also commended Provorov for sticking to his convictions.

Neither the team nor the NHL intend to punish the Orthodox player. “Players are free to decide which initiatives to support,” the league said.

On the other hand, Provorov has, unsurprisingly, come under media fire. Canadian sports commentator Sid Seixeiro declared: “The National Hockey League needs to attack this and figure this out, because what I heard last night was offensive and didn’t make any sense… Nothing scares me more than any human being who says I’m not doing this because of my religious beliefs.”

NHL Network senior reporter EJ Hradek said if Provorov can’t stand behind the LGBTQ lifestyle, then he should just go back to Russia where he can feel more comfortable, or go fight in Ukraine.

Hockey News writer Adam Proteau proclaimed: “He’s a shameful human being whose homophobia is only going to get more shameful over the years.”

On the other hand, hockey fans and regular Americans have rallied around the religious Flyer. His jersey has sold out in many online stores and he is listed as having the most popular men’s jersey, women’s jersey, and sweatshirt, and his Branded Backer shirt is the bigger Flyers-related seller. 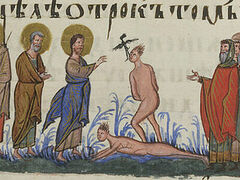 Belief and Unbelief
A Homily on the Tenth Sunday after Pentecost
St. John of Kronstadt
We owe all the successes of enlightenment in all fields to our faith, which has shed abundant light into the minds of men and into all the sciences—and yet we reject faith? Do children reject their mother, who bore them and raised them up? It’s insanity and ingratitude! 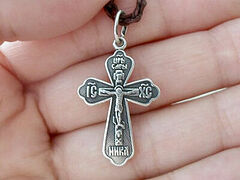 “You don’t exist, you’re just a vessel”
Three stories of confession of the faith
Anna Berseneva-Shankevich
“Our specialists examine the pages on social media of each candidate applying for a job. And your ‘Religion’ column says ‘Orthodox Christian.’ Remove it and you’ll be invited for an interview.” 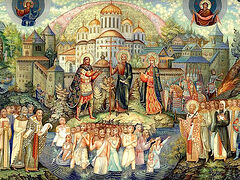 Carol Men1/23/2023 6:07 am
I commend this hockey player for being true to Orthodoxy, and to the God he worships. God created humans male and female and told them to go forth and multiply. The Homosexual/Lesbian gospel diametrically opposes God's Word. People have to make choices if they are going to call themselves Christians. Remember, Jesus said that in the world (Christians) we will have tribulation...........but that we should be of "good cheer" for He has overcome the world.

Macedonian1/22/2023 10:08 am
Bravo for this guy, traditional family supporter. Who want to be member of LGBT it is their decision.

Ioanna1/20/2023 11:27 pm
How come it's OK to support LGBT but not be true to your own beliefs (whether religious, cultural other)... LGBT seems to be the most discriminatory organisation yet, and fully embraced by too many powerful political institutions (UN etc)... LGBT specifically aims to break down traditional family values which have been embraced for centuries, since the beginning of mankind, discriminates against those who don't believe what it does, discriminates against those who have a religious stance on what is family, what is not right and wrong etc. LgBT wants you to believe what it believes, it creates friction and hate... it is the most destructive movement I have ever come across yet proclaiming its self love and love for all... whether you are religious or not, it's a divisive and hate driven organisation covered in colorful colors... a real wolf in sheep's clothing. Its an organisation propagating hate under a rainbow colored umbrella. All the comments against the player are proof of this.