“Complaints are the visible display of our inner discontent”

Fr. Andrew Samsonov, rector of the All Saints of the Land of Nizhny Novgorod Church currently under construction, the dean of the Vorotynsky district of the Lyskov Diocese, reflects on the existence of Holy Rus’. Could it be a phantom or some righteous tale? If it isn’t a fairy tale, then who embodies it, and why? Fr. Andrew Samsonov in a procession with the cross at the settlement

Times were hard, we suffered persecution, but we were happy

At one of our meetings with Father Andrew, we couldn’t help but raise the subject of constant discontent, if not grumbling, resulting from the diminished level of the “comfort” so many of us are now used to having. Some of us think fewer red or black caviar sandwiches on their table is a sign of the end times; or they get depressed because they are unable to travel to their favorite destinations. Others despair at the lack of a familiar, steady connection with a world replete with that coveted or, as it turned out, completely illusory “Big Mac bliss,” and, as a result, they run scared when someone says, “sanctions.” Whether or not a Christian should panic is certainly a rhetorical question. The problem here is how not to become panic-stricken. Father Andrew smiles sadly:

Complaints are the visible display of our inner discontent; in other words, it affirms our deplorable spiritual state

“Our complaints, I think, make manifest our inner discontent; that is, they affirm our deplorable spiritual state. Discontent is a disease of modern times. I believe it is an issue of humility. Or, more precisely, the absence of it. What is humility anyway? It is never-ending good-naturedness. We can, and we should, always stay content under any conditions—that is, being happy and pleased with everything around us. As for discontent, or grumbling, or lips pursed in resentment—those things are quite dangerous. Let’s say your life comes to its end and you go to heaven. But up there, fancy that! The angels don’t fly like you want them to, or the trees are not planted the way you envisioned it and the flowers look out of place in their flowerbeds. You’ll be told, “If you really don’t like it here, go and find yourself another place.” We must have a feeling of a never-ending good-naturedness. I remember a story of an elderly batiushka who served in Soviet times and knew firsthand what persecution was. He would say, “Give me a break, really. People today spread caviar on their bread and rant, ‘Oh, we are going through such hard times these days! We can’t concentrate on work, and nothing’s going right.’ I catch myself thinking: when my brother and I were still at school, my mother would give us enough change to buy a piece of sponge cake and a cup of tea. Enough for only one of each! But there were two of us, so one of us would have none—that’s how little money our family had at the time. It also meant that on the next day she would give money to the other of us. And so, the one who had no money would have to get by with bread and salt on that day, as that was freely available in the school cafeteria. But we were so happy. Because if you ate that sponge cake you’d feel great, but if you ate just bread, you’d still be happy because tomorrow will come and you will be eating sponge cake. And, of course, we shared everything with one another. There is nothing more delicious than the bread your brother has shared with you or vice versa. So, believe me, the crisis isn’t around us—the crisis is in our heads.”

I asked Father Andrew whether he had encountered persecution in the Soviet times. Because there is an ongoing trend to consider it a virtually blissful time: “There were perhaps certain minimal problems” (and the destroyed churches, murdered Christians, concentration camps and exile are, apparently, such “minimal problems”). But, other than that, everything was just perfect: cheerful youth, “confidence in the future.” He replied that he did encounter persecution, but just barely, since the persecutions had waned by then. But he spoke with many of those who had suffered in earnest—either themselves or their relatives. “Where else did the church we are building receive its name—All Saints Who Shone Forth in the Land of Nizhny Novgorod—that is, the new martyrs and confessors? If everything was fine, then why did we have so many martyrs for the faith in every corner of the Russian land? There was persecution, and let us not forget about it.”

Another thing is that persecutions made our Church and our people stronger. Fr. Andrew recalls:

“In the late 1970s, in the village of Raznezhye on the other side of the Volga, the children who finished kindergarten were given “first-grader kits”: a book bag, a pencil case, and their first book. This is a large village and so its church was never closed. So, the children were receiving their presents as future first graders. Well, some secretary of a district party committee would be invited to attend this event. So there he was, handing out gifts to all of the first-graders who came one after another to get them. Each one of those children would say in return—every single one of them: “God save you, God save you” (that’s what we say instead of “Thank you!” in that village of ours). And that secretary of the district party committee is standing there, not sure what to say, so he just keeps smiling somewhat awkwardly. So much for the godless times—our grannies kept doing their part! They continued to take their grandchildren to church, and they kept telling them about Christ. And they still do it. So, we tell them during the sermon, “You should be our apostles.” What would have become of us without the grannies! For they truly often carry out an apostolic ministry. Thank God we no longer suffer persecution for the faith. We shouldn’t impose anything on others, but we should surely talk about it. If you don’t impose anything on people, they start to take an interest in faith; and who is best at telling people about God in a kind and simple manner without any sermonizing? Our grannies, of course!

At the time of Khrushchev’s anti-religious persecution, when the churches were again closed and destroyed, and priests persecuted at every opportunity, their residence permits taken away for any slight misstep thus successfully denying them the opportunity to continue their ministry, we had the following incident. At the time, Fr. John was serving as a priest in the Nizhny Novgorod Region, then known as the Gorky Region. One day he was asked to secretly baptize children in a village. The hut was jam-packed. And, imagine, someone turned them in, “tipping off” the authorities. Apparently, no village was without its own Judas. Once the Sacrament of Baptism was over and batiushka started the Chrismation, the door opens with a bang and a district supervisor with the local head of administration office step inside, “Fr. John, are you baptizing?” He answers, “No.” “What do you mean, no? What are you doing then?” “I’m anointing.” Their brains were overheating with thoughts like, “Okay, baptism is forbidden, but he said he is anointing… But we know nothing about this stuff.” And since they didn’t get what was going on, batiushka was only suspended for two weeks. It was such a generous gift! That’s what the “trifles of a priest’s life” looked like.

And, there were other cases. A grandmother baptized her grandson at her own risk and peril. But her son, the boy’s father, was some sort of party official. He rushed there in his black Volga to settle things with the priest. “How dare you, what have you done! Un-baptize him at once!” But the priest, a wise old bird indeed, asked him in return: “You’re a non-believer, aren’t you?” “Of course! I’m an atheist!” “Then based on your point of view, nothing really happened here, as he just had a bath. That’s not forbidden, is it?” The man stood there at a loss for words—and had to retreat, slamming the door in response. 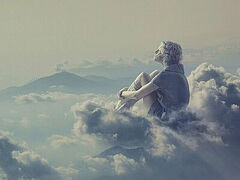 A Harmful and Pernicious Force: On Fighting the Imagination
On the Spiritual Work of the Human Mind, Part 2

A Harmful and Pernicious Force: On Fighting the Imagination
On the Spiritual Work of the Human Mind, Part 2
Metropolitan Seraphim (Chichagov)
The imagination can’t unite man with God. 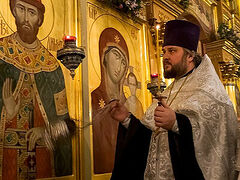 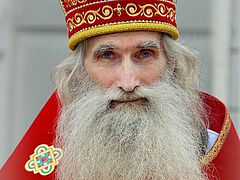 “Christ Conquered the Whole World Without a Single Soldier”
Everyday Saints of Our Days
Archpriest Oleg Teor
At that time, churches were being closed so there would be fewer religious societies. So I decided: So that there would be one less lock on a church, so that yet another church wouldn’t be closed, I would become a priest.
Comments
×