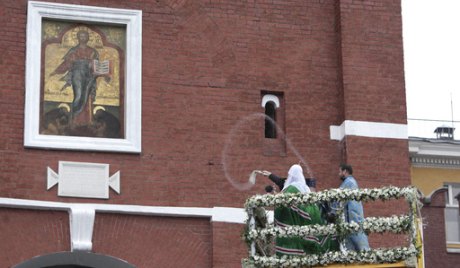 His Holiness Patriarch Kirill defied driving driving rains today to bless the icon of Jesus Christ, recently restored over the main gate of the Moscow Kremlin. The revered icon, which was placed in the "Tower of the Savior" at the Kremlin in the seventeenth century, was covered over in stucco during the soviet regime, in  the 1930's. It was considered lost until last spring, when restoration work was conducted at the tower. The blessing was intentionally scheduled to coincide with the feast of the Dormition (OS calender). The icon depicts the Savior with Sts. Sergius of Radonezh and Varlaam of Khutyn kneeling in prayer to Him.

President Dimitry Medvedev, who was also present at the blessing, commended the restoration of the icon as an encouragement toward national unity. The President said that, "We should remember those who made this possible during the period of godlessness, risking not only their jobs, but also their lives to save this wonder for future generations--for those who are here today on Red Square, those who will come to the Kremlin, and be inspired by the icon that protects the Kremlin, Moscow, and all of us." He further stated that, "Today's event contains great significance; including the unity of the Church with the people." Journalists tell why Russian Minister of Defense crossed himself at Moscow’s Victory Day Parade
The journalists of the Kommersant newspaper have stressed that none of Russia’s previous Ministers of Defense ever made such a gesture before, and have put forward their version why Sergei Shoygu made the sign of the cross at that moment.