Fr. Dimitry Smirnov requests opening of St. John of the Ladder church in the Kremlin on its feast, also Space Day 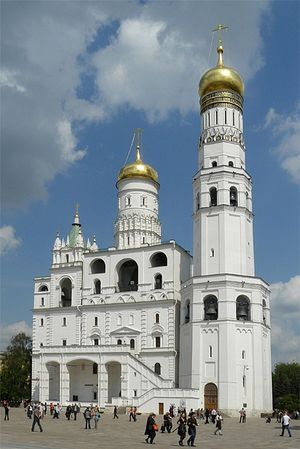 Head of the Moscow Patriarchate Department for Relations with the Armed Forces Archpriest Dimitry Smirnov made an appeal to Parliament in the State Duma at a meeting on Wednesday to open the Church of St. John of the Ladder, located under the bell tower of Ivan the Great, for services on its patronal feast day, April 12, which happens to coincide with “Space Day” in Russia.

Fr. Dimitry cited the symbolism of such a gesture: a celebration of both St. John of the Ladder, and the the first human space flight, made by the Russian cosmonaut, Yuri Gagarin.

Vice Speaker Lyubov Sliska answered Fr. Dimitry that the first service would hopefully be conducted in the church as early as April 12, 2011, when the country would celebrate the 50th anniversary of the first human space flight Revered Icon of the Savior Returned to Kremlin Tower
His Holiness Patriarch Kirill defied driving driving rains today to bless the icon of Jesus Christ, recently restored over the main gate of the Moscow Kremlin.