Give Hagia Sophia back to Christianity 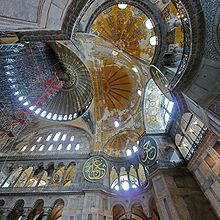 I came to Istanbul for two months just after its 2010 reign as a European Capital of Culture. In bookstores and billboards, I saw Istanbul wants to be a bridge between cultures, to a world beyond Turkey. I saw the claim that Istanbul is an almost exclusively Turkish-Muslim metropolis, not accidentally the least ethnically and religiously diverse of the great modern cities. While population exchange lies in the past, Turkish minorities still charge that an excessive monism dominates the national consciousness. A politics of enforced absence prevails over a politics of multicultural presence.

So I dare to commit the sin Orhan Pamuk deplores (and curiously celebrates) of foreign visitors staying a short time but reaching monumental conclusions. I propose Istanbul give Hagia Sophia back to the world of Christianity. Is this really outrageous?

The history of Hagia Sophia is well known. From its dedication in 360 until 1453, this Byzantine landmark was the Orthodox cathedral of Constantinople. It became a mosque from 1453 until 1934, when it was secularized, and re-opened as a museum in 1935. What was Mustafa Kemal Atatürk thinking when he secularized Hagia Sophia? His biographers portray him as decidedly unsympathetic to religion. Perhaps he dreamed of secularizing the Blue Mosque as well.

But even if Atatürk’s predilections might have relegated all living religion to museum status, not everything in his worldview is slavishly followed today. Turkey spent the last century evolving into a modern state. Both secularization and “re-sacralization” are simultaneously developing under the present government. If Istanbul, or Prime Minister Recep Tayyip Erdoğan, were to give Hagia Sophia back to Christianity, it would be a symbolically powerful and indeed electrifying act. The erasure of religion is not required for modernity, certainly not in the United States, but also not in the European Union.

Is there a not-so-subtle theological argument in the relegation of Hagia Sophia to museum status? In the 20th century, Jewish theologians accused Christians of “supersessionism,” the claim that the Christian covenant with God supersedes the Jewish covenant, and Judaism is no longer a valid religion. In the heavy symbolism of a secularized Hagia Sophia, does Turkey relegate Christianity to an outdated ruin now superseded by Islam? Can this be the agenda of a cosmopolitan city?

There are other good reasons to give Hagia Sophia back. “Repatriation” is a big theme in museum studies. Many American and European museums begun responding to demands from countries, like Turkey, who want their plundered cultural patrimony returned from a colonial grasp.

In an age of ecumenism, not only Christians are determined to honor each other’s sensibilities, but “interfaith” councils around the world are looking for gestures of goodwill among world religions. World Muslims requested religious space at the Roman Catholic cathedral in Cordoba. Hindus and Muslims in India have sought resolution to contested sacred space. What would Islam lose if a now-secularized museum were given back to Christianity as one of its holiest sites? In an age of sometimes militant secularism, wouldn’t many Muslims be glad to see Hagia Sophia once again a center of religious vitality and the beauty of the Orthodox liturgy at one of Istanbul’s proudest cultural symbols?

Finally, there is the matter of funding for renovation. While much good has been done since the World Monuments Fund placed Hagia Sophia on an endangered watch list, the building is far from being restored to its former glory. Many books on Constantinople/Istanbul suggest if you want to see the glory of Byzantium, you must go to Venice or Ravenna, not Istanbul. But isn’t Orthodox Byzantium also Istanbul’s heritage? American Express secured a series of grants from 1997 to 2002 for the restoration of the dome, but there is so much more to be done. The model I have in mind is Dresden’s Frauenkirche, the mother church of that city. Almost totally destroyed in the war, it is now returned to its former glory, the result of a worldwide campaign, which began even before the fall of Communism in East Germany. I believe that Christians, and others, around the world would enthusiastically contribute to the renovation of Hagia Sophia to its Byzantine glory, and not another cent would be required from Istanbul’s or Turkey’s treasury.

It is now another year since Istanbul was designated, at its vigorous request, to be a capital of European culture. The world’s imagination would newly be drawn to Istanbul, were it to make the stunning and spectacular gesture of returning Hagia Sophia to the list of the great religious buildings of the world. Christianity would, of course, acclaim such a move with gratitude. But Istanbul itself would also regain one of its former glories and demonstrate to the European community its cultural and religious diversity.

Patrick 12/26/2017 5:47 am
What a blessing for the Great Church of Constantinople and the people of Turkey to show the world that Islam is truly a community that believes in submission, surrender, peace, and the fellowship of all God’s children.