An Apple from St. Pelagea

A wonderful story of the saints and our times

On October 8/21, the Orthodox Church honors the memory of St. Pelagea († 457). This woman, once a courtesan and leader of the dancers of Palestinian Antioch but who was converted to faith in God after hearing a sermon by St. Nonnus, became a nun during the fifth century. Metropolitan Joseph (Chernov † September 4, 1975) was a great hierarch of the Russian Orthodox Church who spent over twenty years in the soviet concentration camps for his faith. He was an elder and clairvoyant man of prayer who bore the ascetic labor of foolishness-for-Christ, and was almost our contemporary. Raisa Semenovna Taboranskaya, Met. Joseph’s spiritual daughter, talks about the connection between these two holy people, St. Pelagea and Metropolitan Joseph, who lived 1500 years apart. 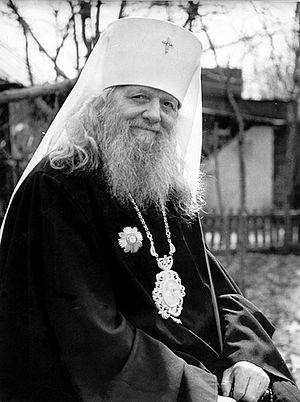 Metropolitan Joseph (Chernov).
While he was in the camps of Chelyabinsk and Karaganda, Vladyka Joseph corresponded with us. Our family, with the help of kind people, sent him monthly packages of food for twelve years of his imprisonment. One of these packages came to Vladyka on the eve of the feast of St. Pelagea (October 8/21). Other prisoners in the camp stole the package from him, but one prisoner saw this and took the package away from them and gave it to Vladyka.

I had packed this package myself, and when I saw that there was a free spot, by God’s Providence I dropped an apple in it. When Vladyko saw the apple he wrote with joy and exultation of soul:

First of all I bow to you and thank you for the beautiful apple that you sent me in the box for the day of St. Pelagea. I received this package on the evening before her day. Of course, if this package was not sent by you intentionally for 10/8, it is still no accident, but providential. Yes, yes, my dear. Especially an apple—yes, yes, it’s God’s work. If these words about the apple have you interested or perplexed, and you sent it only because it came by-the-by into your hands, and your love sent it to grandpa, then let me tell you this: When the akathist[1] was being written in Azov in early 1942 and finished in summer, in June, that young man, a monk, who wrote it and finished it on the day of her canonization, that is, the first day it would be read and blessed, he was very anxious—will the St. receive this little work of his, would the Lord reject this praise of His ascetic as insufficient and unworthy? 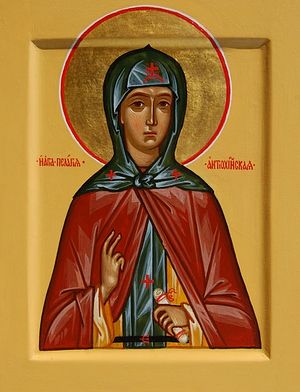 St. Pelagea of Antioch.
He, the young man, that monk, was very exhausted in spirit and prayed to the Lord to give him a sign. He prayed to the saint to either accept it or reject it. On the evening before day when the akathist would read at the Divine services in the morning, this humble author and creator of the akathist had a dream. Yes, yes, it is true—I am writing these lines in accordance with the conscience of my calling!

He saw himself in a very large, beautiful, beautiful garden (more beautiful than the beautiful and magical Sofievka);[2] there were many pavilions of various shapes and styles. This author, as if still a boy in only britches and shirt, was stunned by the beauty of the garden and its pavilions. He was afraid, and there were no people there; the garden was a reflection of heavenly beauty on earth, and the pavilions were made of precious metals and thick glass. There were wondrous stands and shelves; and on the shelves, which reached to the ceiling in about four rows, stood various beautiful, beautiful baskets with different fruits—beautiful fruits that he had never seen before.

The young boy, this author, looked with wide eyes and a beating heart at all this speechless beauty, and suddenly a white, white dove with a red comb on its head flew in. Circling several times around this lone person, it lighted on the top of the shelves, on the rim of one of the golden-weave baskets, which was full of the most beautiful golden red apples, and, knocking one of the apples with its beak, threw it to this boy-author who caught it on the fly and exclaimed in ecstasy, “Such a wonderful apple for only one kopeck!” He awoke with his eyes full of tears and his heart beating.

Of course the author understood that his labors, although just a kopeck, were nevertheless accepted by the saint, and he himself was still only a little, little man…

That holy hierarch, St. Nonnus, who converted Margarita (Pelagea) to Christianity, saw in a dream that he was serving the Liturgy and a black, foul-smelling pigeon was flying around the holy table, and when he was leaving the church after the Liturgy it was flying around his head. When he neared the door there was a baptistery to the right where they were baptizing adults, and he grabbed that pigeon and immersed it three times in the font, after which it became a white, white dove, and a fragrance filled the whole church, and it disappeared into the blue heights of the heavens…

Nonnus was going to Antioch, where he baptized Margarita as Pelagea. That is why St. Pelagea is called a “little dove” in the very refrain…[3] And today—an apple, not by accident! I have never eaten such a beautiful and tasty one in my life, although I have been to the Crimea, lived in the Caucasus, and have eaten other apples! There! Glory, glory be to God.

My hand hurts a little and trembles. Yes, soon, perhaps, we will see each other. May God grant it. A bow to you, and, thank you.

Chewing it, I eat it with pleasure.

That is how the Lord consoled Vladyka in prison, and in consoling him he rewarded him with a heavenly apple from the garden of St. Pelagea. Then in Uman, Vladyka gave my father an icon of St. Pelagea and said, “I am leaving this icon in your church, for it contains a particle of the holy relics of the saint. Keep it, always celebrate this day, and pray to Saint Pelegea.

[1] Metropolitan Joseph (Chernov) is the author of an akathist to St. Pelagea of Antioch.
[2] A park on the outskirts of Uman.
[3] The refrain of the ikos to St. Pelagea reads: “Rejoice O Pelagea, most wondrous little dove Of Christ.”
See also “Savior of the Apples”
Ivan Shmelev

“Savior of the Apples”
Ivan Shmelev
(From Year of the Lord.) It all seems to me that everyone is only thinking about apples. The Lord is also here with all of us, and He is also thinking about apples; after all, we’ve brought them to Him—look, Lord, how good they are! And He looks at them and says to all, “Well, good, and eat them to your health, children!” And they will be eating completely different apples—not store-bought, but church apples, holy ones. This is the very Transfiguration.
Comments
×