Orthodox Bishop: Christians are safe and secure in Gaza

Bishop Alexius of the Roman Orthodox Church in Gaza has praised the safety and security enjoyed by Christians in the Gaza Strip under the rule of the Palestinian government headed by Prime Minister Ismail Haniyeh. 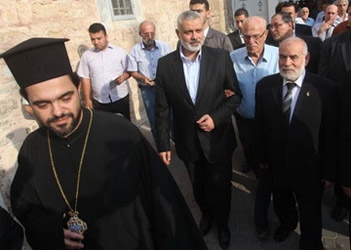 Ismail Haniyeh with Christians
The Christians in Gaza are living in safety just like their Muslims brothers. There is no difference between them...

Alexius told the German DW TV channel that: "our relationship with Hamas rule in Gaza has been within its natural framework. The cooperation between the Church and the authorities has not changed. Hamas and its government are keen to maintain the security of the Church and the Christians in the Gaza Strip."

Alexius explained how: "our people experience a general sense of safety, even better than before, and especially better than after the outbreak of the second Palestinian intifada in 2000. Before Hamas rule we suffered from the chaos and disorder of the Palestinian streets, but currently we do not face any problems. Yes, there were some problems at the beginning and in previous periods, but these were isolated incidents. The Palestinian government in Gaza has confirmed that it does not discriminate against Christians in the Gaza Strip on a religious basis."

The media adviser to Hamas in Gaza, Taher Al-Nunu, told the German channel that: "The Christians in Gaza are living in safety just like their Muslims brothers. There is no difference between them. The government holds frequent meetings with representatives from the Christian community to listen to their problems and concerns in order to help them to develop appropriate solutions."

The Greek Orthodox Church is the largest and oldest among the three Churches in the Gaza Strip, dating back to the era of the Roman Emperor Arcadius in 402 AD.

The Church has its own institutions to serve the Orthodox Christian community in the Strip, including a Church Fund, which is a charity organization that helps needy families, a youth organisation and a Greek Orthodox private school attended by both Christian and Muslim students.

Additionally, a special church court headed by the Church Bishop handles family issues, such as marriage and divorce, as well as general disputes. Greek Church Offers Time-Out From Israel-Gaza War
During a brief humanitarian truce this week, some 1,000 Palestinians, almost all of them Muslims, left their homes and sought refuge in one of the only two churches in Gaza. Israel-Gaza conflict: Greek Orthodox church of St Porphyrios becomes a small refuge in the heart of Gaza’s bloodletting
Amid all this two things were clear to the refugees who had taken refuge at St Porphyrios: they were not going to go back to their homes they had been forced to abandon, and they were not going to move to the mosque down the road. Both, they felt, would be highly dangerous.
×