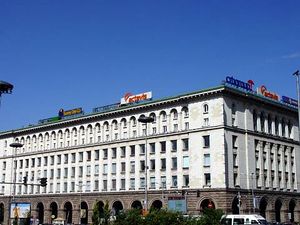 Russian businessmen are interested in purchasing the Sofia Central Department Store (Tsum) building and turning it into a museum of Orthodox Christianity.

Gergov, a famous Bulgairan businessman and Bulgarian Socialist Party Plovdiv organization leader, has himself neither confirmed nor denied the information, reports Dnevnik.bg

The offer reportedly states that the goal of the project is to integrate the cultural and the Christian Orthodox tradition between the South Slavs and Russia.

The prospective buyers consider the building particularly suitable because of its central location, close to several early Christian churches, and to the the St. Alexander Nevsky Cathedral.

A year ago, former Bulgarian Culture Minister Vezhdi Rashidov suggested the Tsum buliding accommodate the National History Museum, but however the idea was not implemented.

Georgi Gergov, who has interests in tourism, the light industry and communications, is known to be a personal friend of former Bulgarian President Georgi Parvanov.

Gergov is majority owner of International Plovdiv Fair, among others. He acquired Tsum in 2004 from Reagent Pacific Group for the aount of EUR 20 M. Currently, the Sofia Central Department Store is owned by his two sons. Exhibition dedicated to New Martyr Alexander Schmorell opens in Bavaria
Six exhibition stands relate the life of one of the members of the anti-fascist students' resistance group Alexander Schmorell (1917-1943), who was canonized in 2012 by the Russian Orthodox Church outside of Russia. ‘Jerusalem,’ a tribute to the holy city, comes to the IMAX screen
The newly released movie "Jerusalem," filmed in 2D and 3D and playing on IMAX and other giant-screen theaters across the U.S. and the world, including Salt Lake City, gives viewers grand, hallmark panoramas, at once awe-inspiring and intimate.
×