Insulting graffiti on the walls of Serbian Convent in Kosovo

The events of last two months indicate the ongoing persecutions of the Serbian population of Kosovo and Metohija.

According to a report of the website of the Diocese of Rasko-Prizren, on the wall of the Dormition Convent in Djakovica in the morning on February 23, graffiti appeared in Albanian: "The only good Serb is a dead Serb."

The day before, on the Saturday of the Reposed, the Kosovo police did not allow a group of Serbs to visit the convent and graves of their relatives at a local cemetery. 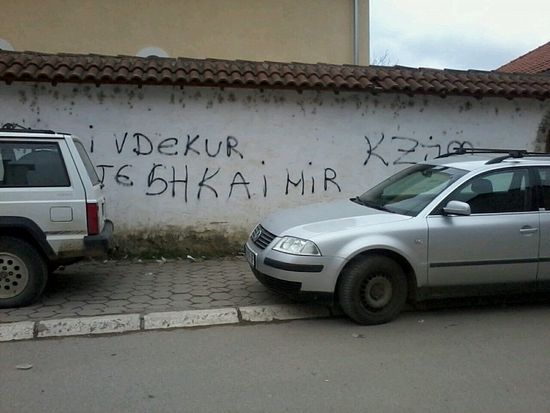 According to the diocese's report, the insulting graffiti was removed on February 24. However, Church representatives believe that, "The atmosphere of intolerance towards this shrine and Serbian refugees indicate that the level of their security has become much lower, and the Serbs who come here to visit the convent and the cemetery are not welcome."

This incident is just one of a large number of indications that the situation of the four Serbian women, nuns of the convent, is worsening. These elderly women, who live as a monastic community, are all what remains of the Serbian population of Djakovica. 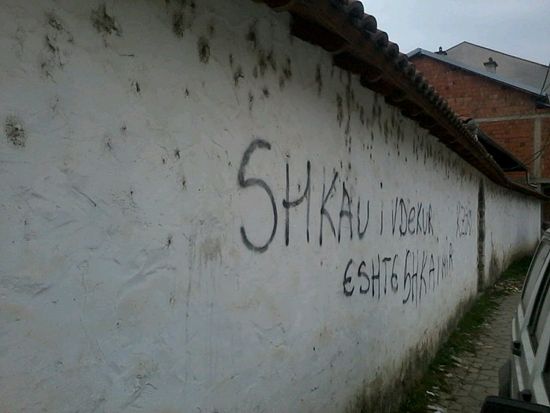 This year on the eve of the Nativity of Christ, Albanians organized mass rallies in front of the walls of the convent, during which two coaches with Serbian pilgrims were pelted with stones. The Serbs were forbidden to visit the convent. On the next day—the very feast of Nativity—the sisters of the convent were unable to attend a Divine Liturgy because of the rallies.

In connection with the incidents, Bishop Theodosy of Rasko-Prizren called once again upon the international representatives in Kosovo and Metodija to halt the campaign of provoking national and inter-denominational hatred in Djakovica, and to defend lives of the nuns, the returned Serbs, and the church property. 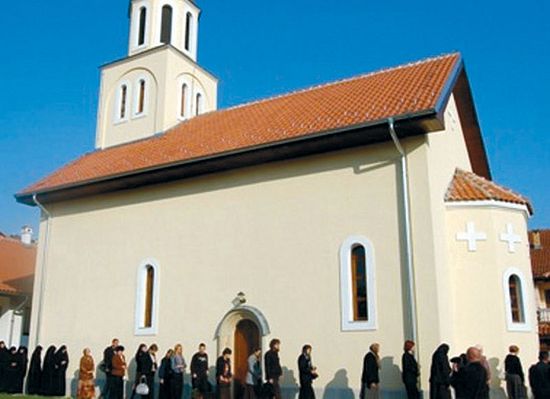 The Church of the Dormition of the Most Holy Theotokos was burned down to its very foundations during pogroms in March 2004. Then the elderly ladies who guarded the church were rescued at the last moment and evacuated to the Visoki Decani Monastery. The church, fencing, and the residential building were constructed again in 2009. Soon the convent was established.

The large Church of Resurrection of Christ in Djakovica was destroyed as late as in 1999, and during the pogrom of 2004 its ruins were completely removed.

In spite of attempts by the diocese to preserve this site as church property in hopes of restoring the church, the local community arranged a park there, and on the site of the church a flagpole with the Albanian flag was set up.

Mother Theodora’s “Kokoshki,” or God is stronger than rockets
An Interview with Nun Theodora of the Serbian monastery of Gra?anica
Peter Davydov
There was a miracle there: At the time we were under fire old Grandfather Pero was in the house. The old caretaker of the vineyard lingered—he didn’t try to flee anywhere. A Tomahawk missile made a direct hit: the whole house was turned into ruins in a second. When the dust settled, there was old Pero standing there looking around. Later our soldiers asked him, “Grampy Pero, how are you still alive?!” Famous Serbian monastery receiving threats
Abbot of the Visoki Decani Monastery in Kosovo and Metohija Archimandrite Sava Janjic has informed media representatives that an unidentified person is threatening to destroy the monastery in the next several days.

Serbs In KiM Are Not Forgotten – SPC Patriarch Irinej
Patriarch of the Serbian Orthodox Church (SPC) Irinej addressed his traditional Christmas epistle to Orthodox believers in Serbia who celebrate the holiday according to the Julian calendar, with special emphasis on the position of Serbs in Kosovo-Metohija (KiM) where suffering and injustice persist.
Comments

Tyler D.11/4/2016 4:37 am
To the editors:
Why do you not talk about illegitmate Western puppet states like "Kosovo" with quotation marks, as this site usually does when talking about "marriage" in the sense of immoral abomiation against God called marriage in the West (homosexual sin).
Kosovo is a city in Holy Serbia, not a nation state, no matter if it is occupied.
Would you call the part of Russia that the Nazis occupied in thw world wars as if it were a legitimate state? Of course not!
May the Most Pure Mother of God and Saint Sava interceed for Serbia.
×