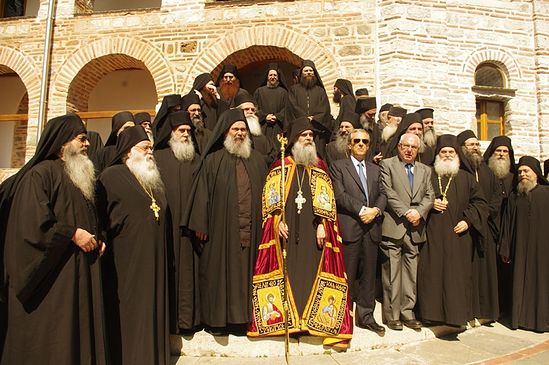 On Saturday, March 15, according to Byzantine traditions, the solemn enthronement of the new Abbot of the Mt. Athos Grigoriou Monastery Archimandrite Chrystophoros took place, reports AgionOros with the reference to Romfea.gr.

Abbots and brethren of many Athonite monasteries as well as numerous pilgrims from Greece, Cyprus, Russia, and other Orthodox countries were present at the ceremony. The Greek government was represented by secretary general of the Council of Ministers Panagiotis Baltakos. Opponent of ecumenism Hieromonk Vissarion of Zograf Monastery takes the great schema
In the schema the writer-hieromonk was named Demetrius, in honor of Greatmartyr Demetrius of Thessaloniki, the Myrrh-Streamer, who was a champion of the Orthodox faith. Thomas Carney3/17/2014 10:47 pm
May God bless and protect all the monks on Mount Athos! For the New Abbot Chrystoforos, may God grant him many years! Axios! Axios! Axios!
×