One Woman’s Faith: St.Olga—The Mother of Saints of Many Nations 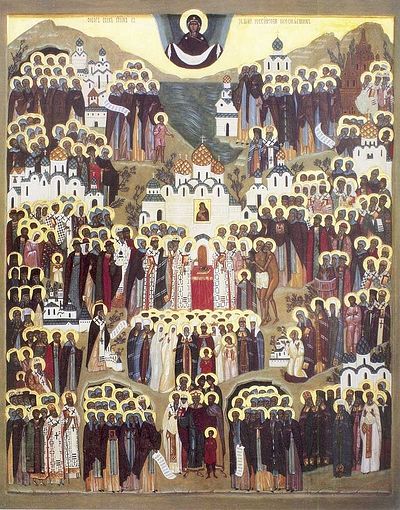 We sometimes see the term ‘the Russian Saints’, only to find that these saints include St. Olga and St.Vladimir and many others who lived long before Moscow became established as a small town, let alone as the capital of a country now called ‘Russia.’ The problem is that English has no translation for the word ‘Rus’ – the nearest being ‘the Russias’, as in, ‘Alexis II, Patriarch of Moscow and all the Russias’. For ‘Rus’ means not only ‘Great Russia’, but also Little Russia (now officially called the Ukraine, even though this only means ‘the borderlands’), White Russia (the translation of Belarus) and Carpatho-Russia (often known in Western history as ‘Ruthenia’). However, in geographical terms, the concept of ‘Rus’ includes not only these four Russias, but also all those places affected by the Russian Orthodox way of life.

This includes firstly the one seventh of the earth which is known as the Russian Federation, stretching right across Siberia to the Pacific. Secondly, it includes all those who in various countries accept Russian Orthodoxy. This is ‘Orthodox Rus’. Whether it is in Latvia and Estonia, Japan and Alaska, Venezuela and Brazil, England and France, Russian Orthodox of all nationalities are also part of ‘Rus’. Thus, the Canadian-born Metropolitan Hilarion, First Hierarch of the Russian Orthodox Church Outside Russia, can talk quite legitimately of ‘American Rus’ and ‘Australian Rus’. Therefore, although the holiness of the geographical Four Russias ends at the present Belorussian border, some 900 miles from the eastern coasts of England, in a spiritual sense it does not end there at all, but continues right into England, where 1,000 years ago there walked saints who were part of the One worldwide Church and fifty years ago there walked St.John of Shanghai, become Archbishop of Western Europe.

Furthermore, in historical terms, since 1917 the holiness of the Russias has become not a matter of over a thousand canonised saints revealed to the Church, but also a matter of tens of thousands of New Martyrs and Confessors. At present theses number over 31,000, though this figure grows monthly and may reach well over 100,000. For the twentieth century was the most fruitful in terms of the numbers of saints – holy martyrs, born out of the Four Russias. As the ever-memorable Metropolitan Laurus of New York and Eastern America said, ‘The whole land of Rus has become an antimension’ - that is a place filled with the relics of the holy martyrs.

Introduction: The Role of Women in Evangelisation 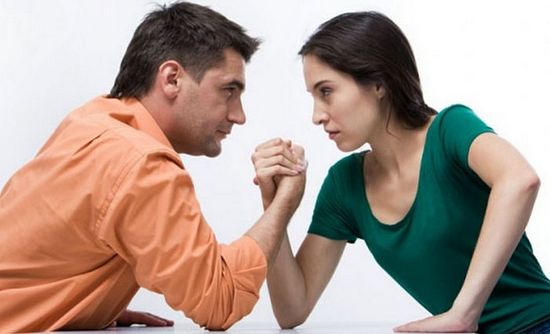 The role of women in shaping the world of the Western past, Christendom, is greatly underestimated by our anti-feminine age. Nowadays, women are merely supposed to imitate men, voluntarily entering into the same wage slavery as the male sex. Today women are conditioned by State propaganda to act like men, even to the point of renouncing femininity through male appearance and dress and renouncing motherhood though the infanticide of abortion and sterilisation. The result of this is the destruction of the family, the basic unit of any society. This in turn unleashes unchannelled sexual forces, leading to the disintegration of the human person.

It was just the opposite in the age of the great Orthodox Christian struggle to free the female sex from tyranny and create stable family life. Then the battle was for freedom from ancient paganism with its female subservience to economic and sexual slavery and infanticide, to which modern women are now being encouraged to return. Indeed, in the first centuries, many of the greatest founding apostolic acts in building Christian societies were carried out by women. We have the examples of holy apostolic women like St.Helen in the Roman Empire, St.Nina in Georgia, St.Clotilde in early France, Bertha in early England, St.Ludmila in Orthodox Czechia, Dubrava in Orthodox Poland, and in Russia St.Olga. Who was St.Olga?

Manipulated by political influences, in recent years provincial nationalists in and from Galicia in the far west of the Ukraine have tried to make St.Olga into a ‘Ukrainian’. And yet this very word was unknown just over a hundred years ago, let alone just over a thousand years ago, when St.Olga († 969) lived. The reality is that St.Olga heads a family of some fifty saints which stretches down the generations and to many parts of the world of Rus. And by Rus we once more mean not only Russia, the Ukraine, Belarus and Carpatho-Russia, but realms far beyond the East Slav lands. For St.Olga is the mother of a particular people, a race of over a thousand saints up until 1917. And after 1917 that particular people brought forth saints a hundred times, perhaps a thousand times the thousand saints who had been revealed up until then, so as to become a unique centre of holiness in the world, truly ‘Holy Rus’. 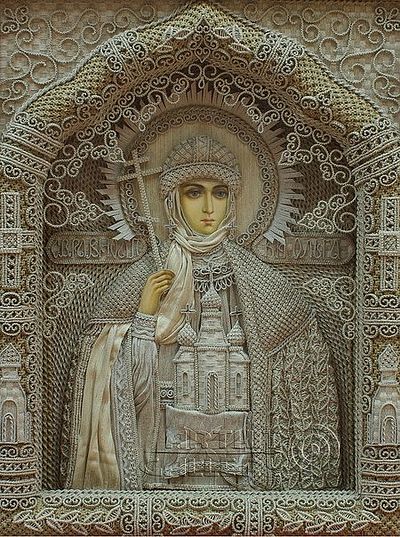 St.Olga herself did not come from what is today known as the ‘Ukraine’. She came from Pskov in northern Russia, not far from the present Estonian border, born there perhaps in about 920. Her original Slavic name was ‘Prekrasna’, meaning ‘Beautiful’, but she adopted a Swedish name (definitely not Ukrainian) after a man called Helge, in Slavic Oleg. He was the Varangian (Viking) guardian of her future husband Ingvar, in Slavic Igor. The name she took on, Olga, was and is the Russian form of the Swedish name Helga, the masculine of which is Helge. And since she was called Helga, it did not take the Patriarch, St.Polyeuctus, who baptised her in the Imperial Capital in 957, much searching to find for her the name ‘Helen’. This is simply the nearest possible saint’s name to Helga.

No provincial xenophobe, Olga was to live in multinational Kiev, where later there lived the Swedish protomartyrs of Rus, Sts John and Theodore († 983). Olga, a Russian from Pskov who had married the Swede Ingvar, had descendants who included many nationalities. Thus, her grandson the great St.Vladimir, who baptised Rus in 988, married a Bulgarian. Their offspring numbered two saints, St. Boris of Rostov and St. Gleb of Murom († 1015). Both of these princely towns are over 500 miles from Kiev, indeed well to the east of the then still unfounded Moscow. A great-grandson of St.Olga, Yaroslav the Wise, commemorated as a local saint in Kiev, also married a Swede. This was the daughter of the Swedish King Olaf, Ingegerde, who had been baptised in Sweden by the English Bishop Sigfrid of Vaxjo. Ingegerde is known to Russian Church history as St. Anne of Novgorod, after she had taken the name of Anne in monasticism at the end of her long and rich life.

One of Yaroslav’s and Anna’s seven half-Swedish sons is known as St. Vladimir of Novgorod († 1052). Their three daughters were Anne of France, Mary of Hungary and Elizabeth of Norway. A grandson, the half-Greek and quarter-Swedish Vladimir Monomach, married an English princess. This was the refugee Gytha, daughter of the last English King, Harold, who had been slaughtered in 1066 at Hastings by the Roman Catholic invader of England, William the Bastard. One of their sons, that is the four times great-grandson of St.Olga, the half-English Yury Dolgoruky, was the founder of Moscow. Another son is known as St.Mstislav the Great († 1132). Called by the Slavic name of Mstislav, he also bore the name Harold after his English grandfather, who had been murdered by the servants of militant papism a thousand miles west of the borders of Orthodox Rus at Hastings. However, Mstislav-Harold was baptised by the Church name of Theodore and two of his children, Rostislav of Smolensk († 1168) and Vsevolod of Pskov († 1138) are also saints.

The Spiritual Geography of the Holiness of Rus 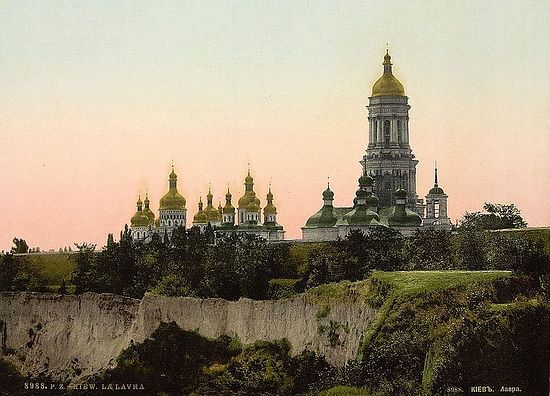 19th-century photo of the Kiev Pechersk Lavra in Kiev

Of course, it is true that in the early eleventh and twelfth centuries, before the Mongol-Tartar yoke, Kiev was the centre of the holiness in Rus. Over eighty saints are listed from the Kiev Caves Monastery and over fifty of them lived in the eleventh and twelfth centuries. Altogether over one hundred saints are connected with Kiev. However, the Church rapidly moved forward, progressing along the rivers, through the lakes and across the islands that provided means of communication for missionary work in Rus.

Within a few years of the baptisms in Kiev in 988 new sees were founded. Already at the end of the tenth century holiness was advancing far to the north of Kiev, to Pskov and, 120 miles to the north-east, Novgorod, with St.Joachim († 1030) and over sixty other saints. Then holiness moved to the circle of towns north-east of the present Russian capital, to Rostov and Suzdal with St.Theodore († c.1030), to Pereyaslavl with St.Ephraim († 1096), to Vladimir and Vologda, to Kostroma and Yaroslavl, to Galich and Uglich, virtually all no more than 200 miles north-east of Moscow. These towns and the area around them were to produce over one hundred saints, among them the phenomenon of St.Sergius of Radonezh († 1392) and his dozens of disciples. From them, the missionary movement of Holy Rus was to move much further north to the shores of the Arctic Ocean and much further east across the Urals into Siberia.

This Orthodox holiness, that came from Jerusalem and went to Antioch in Syria with the Apostle Paul and Alexandria in Egypt with the Apostle Mark and spread to Asia Minor and Greece, to Arabia and India with the Apostle Thomas, to the Crimea and Armenia, to Georgia and Iran, to Ethiopia and Carthage, to the Balkans and Rome, went from there to the furthest isles of the West, where the sun sets in the Great Ocean. And after the fall of this West, nearly a thousand years after Christ was born, this holiness spread north. These lands became known by the name of Holy Rus, so that this providential movement would eventually become worldwide. And this we owe ultimately to the saint from Pskov whose first name, Prekrasna, means ‘Beautiful’ and second name, Olga, means ‘Holy’. For true beauty is always holy and true holiness is always beautiful. St. Dorothy of Kashin
Commemorated September 24/October 7 and February 6/19
Hieromonk Seraphim (Rose)
Thus it was that, having lost her husband and her earthly happiness in the midst of the terrible misfortunes of the Russian land, St. Dorothy, already a woman of mature years, resolved to abandon the world and seek, in prayers and struggles, not a temporary happiness which is so often darkened by various evils, but rather a heavenly and eternal blessedness.
Comments

Vsevolod4/3/2018 5:56 pm
Except St. Olga was not of Rus or Varangian origin, and did not "adopt" Christianity nor was she baptized in Constantinople at her old age.

She was Bulgarian and her name was princess Elena, the granddaughter of the Bulgarian Emperor Boris I. Born and baptized as an infant in the old Bulgarian capital city of Pliska (not in some village of Pskov), and a devout Christian all of her life.
She is the reason the Rus used Old Bulgarian (not Norse, nor Greek) as their official language (both secular and liturgical), because she broght with her all the books from Bulgaria. And that is the reason Constantinople send a Bulgarian, St. Michael, to be the first Metropolitan of Kiev after Knyaz Vladimir
×