Mercy is Living for the Sake of Repentance 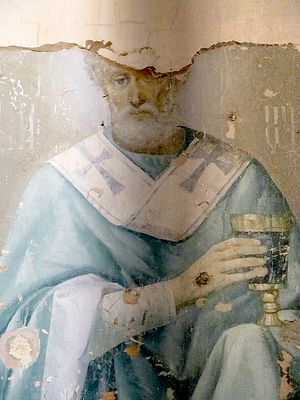 Fresco of St. Nicholas in the church of the penal colony on Ognenny Island.
The whole world prays to St. Nicholas for help in all different situations, but in Russia people pray with special fervor to the saint. They say that the Chinese even called him the “Russian God”, and asked him for help. The saint even answered the requests of those of different religions. Thus it is not surprising that the Russian Church connects the “Day of Mercy and Compassion” with the feast of St. Nicholas—who is merciful, loving, and always ready to help those who need it.

There isn’t an Orthodox church in Russia that does not have an icon of St. Nicholas. His image appears also on the wall of a church that was once the main cathedral of the St. Kirill of Novozersk (New Lake) Monastery on Ognenny (Fiery) Island in Novozersk (Belozersk region). The Monastery has long been occupied by a penal colony, and in 1990 they began sending here those who have been given life sentences. Now the only thing belying the fact that church services once took place here are the two paintings of saints, miraculously preserved in part on the columns of the pre-reconstructed architecture. One of them is St. Nicholas, Archbishop of Myra and Lycia, the wonderworker who in Rus’ was always affectionately called Nichola the God-pleaser.

Some say that you won’t find any faith among the inhabitants—talking with the priest is for them no more than a way to improve their lives materially at the Church’s expense, or to at lease introduce some diversity into their monotonous lives. The prisoners see only other inmates or guards, and they are allowed to take walks only in “boxes”—essentially also prison cells, with four metal walls and a grate on the ceiling.

What does a man need to do to get locked up, barred from human society? And is a person really human who has murdered for entertainment, raped children, and… We won’t enumerate all the crimes that brought roughly 150 people to penal colony No. 5 (often called, the “five-spot”).

It’s not a matter of seriousness of the sin, but of one’s own understanding of what he did. Not all admit their guilt, even when proof of the heinous crimes is irrefutable—the victims themselves were to blame, they say, and it just happened… But for some of the condemned, the priest is not just a diversion but real help for a repentant soul.

Victor has been in the “five-spot” for twenty-five years. He is now forty-seven, and was given the death sentence at age twenty-three. Victor was sentenced for a group robbery and assault, in which two taxi drivers were killed. The young man waited two years for execution, but instead of the firing squad he received clemency and was sent to Ognenny Island. There he began to ponder why he lives, and how should he live on. He started writing to different churches: Tell me, how should I live? At the time he saw no meaning in life. Why should I live if they keep me, as Brodsky wrote, “in place of a wild animal, in a cage?” He received an answer from an archpriest in Vologda, Fr. Georgiy Ivanov.

“Batiushka wrote concisely: you need to live for the sake of repentance,” recalls Victor. “And then it became clear to me why the Lord left me on the earth.

Fr. Georgiy was rector of the St. Andrew Church in Vologda for twenty years, and died in 2010. Many remember him with love, many were put on the right path by him.

After Fr. Victor’s letter he met with a priest—there is one who comes from Belozersk, Fr. Alexander Stulov. Victor receives Communion, goes to confession—that is, he leads a religious life to the extent possible in the conditions of a high security prison. He carries on a correspondence with the abbess of one the regional women’s monasteries, and receives spiritual guidance from yet another priest. He tries to read books on the faith; in his hands right now is the book, What is the Spiritual Life, and How to Be Attuned to It by St. Theophan the Recluse. Faith is a gift of God, and this gift can come to anyone—in freedom, or in prison.

Many say: They’ve committed crimes, and now they are justly punished for it, let them now suffer for the evil they have done. But after all, mercy is help not only to those who need it, but—first and foremost—to those who give it. It is spiritual help that can prove to be saving. Saint Nicholas: icons and frescoes
Prayerful intercessor for those in need, St. Nicholas is fervently and sincerely loved by people on all continents. You will hardly find a single Orthodox church anywhere that does not have a fresco or icon with his image. “It’s Tougher in the Monastery than It Is in Prison”
Natalia Popova
“Now things have sort of come into place,” he says. “I am trying to leave more gradually; I ask Fr. Barsanuphius’s blessing to go to town for a change of scenery. I used to get overtaken by a strong urge, and a couple of times I just ran out and hitchhiked to Moscow. When I returned I got into an argument with batiushka, but he forgave me and let me come back. I didn’t last long in Moscow. It’s too early for me to go there yet.” A Strange Miracle of St. Nicholas in 1956
A true incident which shocked and brought repentance to hundreds of people in the Russian Soviet city of Kuibyshev (modern day Samara), in the year 1956.
Comments