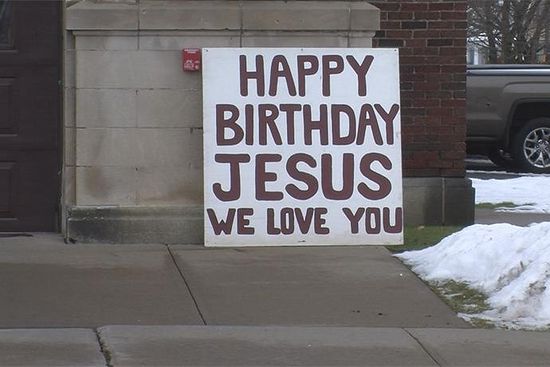 The Utica Fire Department is in the middle of a small controversy over a sign outside one of their fire houses.

The sign says, “Happy birthday Jesus, we love you.”

The Freedom From Religion Foundation is a national organization that promotes separation of church and state and educates the public about atheism and agnosticism.

The group has written multiple letters protesting the sign.

Fire Chief Russell Brooks said the department will not take the sign down, according to NewsChannel 9 WSYR’s sister station WUTR-TV.

“This display is well within our constitutional rights and we’ve seen no reason to take it down when it brings such a good feeling to the community and to the firefighters,” said Brooks.

He also said, the department is also receiving a lot of support from the community about the sign. Liam Fox: It's not 'Happy Holidays' but Happy Christmas

Liam Fox: It's not 'Happy Holidays' but Happy Christmas
A multicultural society does not mean that Christians should shy away from celebrating their faith at Christmas, the former Secretary of State for Defence will insist in a video. Christmas: no room at the inn for baby Jesus in school nativities
As annual school nativity play season gets under way, survey shows baby Jesus being edged out to make room for Elvis, spacemen, footballers and Lord Sugar
Comments

Pere LaChaise12/27/2014 8:51 pm
Utica Fire Dept. has every right to say, "Happy Birthday, Jesus!" as the statement does nothing to establish anything resembling a church by the city of Utica, who employs the firemen. It cannot even be argued that the statement is even confessional, as moslems who are not perverted by modernist Wahhabism would say as much, and historically do!

Jehovah's Witnesses have a deep aversion to the celebration of Jesus' birth and have suppressed Christmas altogether in their ranks, and use anti-traditional ratiocination to fix His birth in the fall.

Even atheists could not object to the sign because it makes no claim that Jesus is Lord and God.

Only other group that actively opposes the appearance of Jesus' name in public are the Jews. But I could hardly imagine Utica's Jews would act so rashly.

r loomis12/27/2014 6:15 am
YES! If people would have stood up to this trash 75 years ago, we would not have this trash. We were not a pagan Founded nation, and we did NOT come here to promote paganism, atheism, the cults, and all that comes with it. Africa was called the Dark Continent for a couple reasons and most people did not want to go there. IF we are not active and careful, we may become a Dark continent, lacking the Light of Truth! Good for these guys. The fact that we Even allow these people to live here does NOT mean we condone their ideas OR allow them to Hold us captive to Their Offended feelings.
×