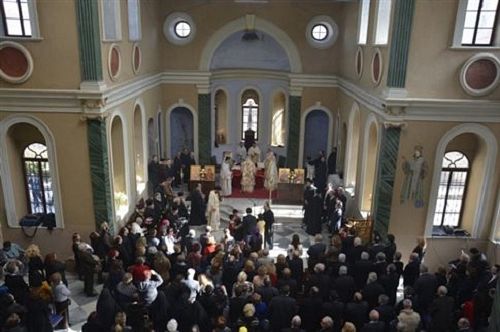 Ecumenical Patriarch Bartholomew stressed the importance of peaceful coexistence between people of every religion in his speech during the Divine Liturgy that took place in Izmir (Smyrna).

“In many parts of the world, Muslims, Christians and the Jewish live in harmony. Religious diversity is now accepted in many countries. We are the ones who will set an example of good coexistence. This example was presented today by the people of Izmir who welcomed us with so much love and care. Please continue to look after and care for the small different communities and minorities of Izmir. Our brothers in Istanbul we have embraced us and that is what we’re looking for here too,” he said.

The Divine Liturgy took place in a devout atmosphere at the church of Agios Voukolos — the patron Saint of Izmir — in Basmane.

The church was built during the second half of the 19th century by the Greek community of Izmir and it is the only Greek Orthodox church that was rescued during the Great Fire of Smyrna in 1922. Later, it was turned into a museum under Kemal Ataturk orders and a few years later it was used a rehearsal space for opera plays.

Ecumenical Patriarch Bartholomew called Smyrna a “city of creation and prosperity, but also a city of legend, pain, grief and suffering.” He thanked the city’s mayor Aziz Kocaoglu, who was present at the Liturgy, for preserving and renovating Agios Voukolos Church.

The Divine Liturgy was also attended by many refugee descendants who traveled to Izmir from Greece, but also by members of Istanbul’s Greek community.

After the Divine Liturgy the Ecumenical Patriarch planted a myrtle tree in the church courtyard and lit a candle at the place where –- according to legend — Agios Voukolos’ tomb is located. Turkish textbooks: “Christians are instruments of hostile forces”
The Ministry of Education of Turkey is continuing to carry on an ideological and intensified struggle against Christianity and Christians using history textbooks.
Comments
×