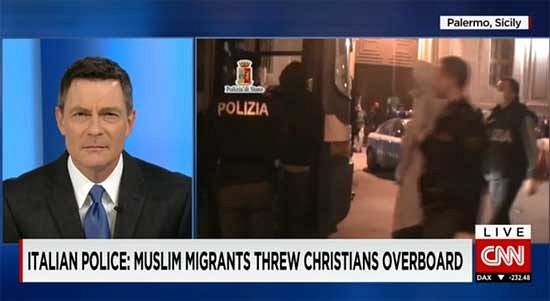 Muslims who were among migrants trying to get from Libya to Italy in a boat this week threw 12 fellow passengers overboard -- killing them -- because the 12 were Christians, Italian police said Thursday.

Italian authorities have arrested 15 people on suspicion of murdering the Christians at sea, police in Palermo, Sicily, said.

The original group of 105 people left Libya on Tuesday in a rubber boat. Sometime during the trip north across the Mediterranean Sea, the alleged assailants -- Muslims from the Ivory Coast, Mali and Senegal -- threw the 12 overboard, police said.

Other people on the voyage told police that they themselves were spared "because they strongly opposed the drowning attempt and formed a human chain," Palermo police said.

The boat was intercepted by an Italian navy vessel, which transferred the passengers to a Panamanian-flagged ship. That ship docked in Palermo on Wednesday, after which the arrests were made, police said.

The 12 who died were from Nigeria and Ghana, police said.

Thousands of people each year make the dangerous sea journey from North Africa to Europe's Mediterranean coast, often aboard vessels poorly equipped for the trip. Many of them attempt the voyage to flee war and poverty in Africa and the Middle East.

More than 10,000 people have arrived on Italian shores from Libya since last weekend alone, according to the Italian coast guard.

Hundreds die each year while attempting the voyage, many times because boats capsized. Last year at least 3,200 died trying to make the trip. Since 2000, according to the International Organization for Migration, almost 22,000 people have died fleeing across the Mediterranean. Metropolitan Nicholas of Fthiotida on immigrants: “When the flame blazes up, it will be too late”
In his interview with the Paraskinio Greek newspaper Metropolitan Nicholas of Fthiotida has commented on the relations established between the Greek government and the Orthodox Church and has noted that uncontrolled immigration poses a threat to Greece. If you really want the job, take religion off your resume

If you really want the job, take religion off your resume
According to a study published earlier this year, and co-authored by UConn's Dr. Michael Wallace, putting any type of religious identifier on a resume minimizes an applicant's chances of landing a job.