Christ is the Source of Living Water

Homily on the fifth week of Pascha, the Samaritan Woman 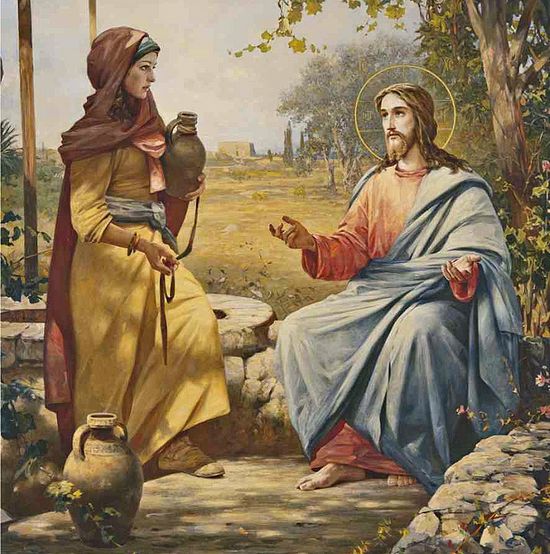 On this Sunday we remember the Gospel conversation with the Samaritan woman. The divine services hymn Christ, Who in His discourse with the woman from the village of Sichar clearly explains that the Source of living water that leads man to eternal life is He Himself. Those who desire to quench their physical thirst can go to a well dug in the earth, and those who desire to assuage their spiritual hunger should go to Christ.

Water in Palestine was always particularly valuable, especially during the dry summer period. So that the population and the animals could drink, wells were dug. The digging of a well, or rather the hollowing out of cisterns in rock was such a laborious and expensive enterprise that it was commanded of the princes or heads of the Judaic clans themselves (see Num. 21:18). This hollowing out of rock and stuccoing within the wells preserved their integrity for whole centuries, even millennia.

The importance of wells can be seen by the names of whole cities that were named after the wells. For example, there is Birsaba (Beersheba)—the “well of seven oaths” (cf. Gen. 21:31). Wells could be in cities as well as outside of them, closer to the pastures (cf. Judges 1:15). Disagreements often sprang up between shepherds over wells (cf. Gen. 21:25; 26:17-22).

Wells filled by spring water were particularly valued, and therefore they were called “springs of living water” (cf. Gen. 26:19; Jer. 2:13). Drinking water from one’s own well was a symbol for Old Testament peoples of peace and a tranquil life (cf. Ex. 36:16).

But even in the Old Testament the expression, “source of living water”, could be understood in both the literal and connotative meanings. The lips of a righteous one could be called a “source of life” (cf. Prov. 10:11), as well as the reasoning of a wise man (cf. Prov. 16:22). To the contrary, the apostle Peter called false prophets, “waterless wells” (2 Pet. 2:17).

In the book of the prophet Jeremiah, the Source of “living water” is equated with the Lord God Himself. Hear ye the word of the Lord, O house of Jacob, and all the families of the house of Israel: For my people have committed two evils; they have forsaken me the fountain of living waters, and hewed them out cisterns, broken cisterns, that can hold no water (Jer. 2:4, 13). As the hart panteth after the fountains of water, so panteth my soul after Thee, O God (Ps. 41:1); I stretched forth my hands unto Thee; my soul thirsteth after Thee like a waterless land (Ps. 142:6), sang King David.

Therefore, when St. John the Theologian witnesses Christ as the “Source of Living Water”, he is referring to the prophets cited above. Only the apostle’s principal accent is on the fact that Jesus is precisely that Lamb Whose blood redeemed a great multitude... all nations, and kindreds, and people, and tongues (Rev. 7:9), and this very Lamb shall feed them, and shall lead them unto living fountains of waters: and God shall wipe away all tears from their eyes (Rev. 7:17). He is the Alpha and the Omega, the beginning and the end. To the thirsty He gives of the fountain of the water of life freely (Rev. 21:6).

God not only gives “freely”, but what is most amazing in today’s Gospel story, He comes to the thirsty person first. The authors of the liturgical stichera emphasizes this: “He Who fills the clouds with water comes to the woman, and asks her for water”,1 “He who filled the lakes with water seeks a source of water”, “He Who hung the earth upon the waters asks for water”.2

In the garden of Paradise, in broad daylight, Eve took the forbidden fruit; and for this she was exiled to a dry and waterless land. And now at the sixth hour, the Source of miracles comes to the Samaritan woman who was suffering from thirst, in order to return this daughter of Eve to Paradise, plenteous in water. For the authors of the liturgical texts, the Lord literally catches the woman with words. The Samaritan woman approaches in order to draw water, and seeing her, the Savior said, “Give Me water to drink, and I will fill you with streams of water”.3

We do not know whether she managed to give the Lord water from the well. Inspired by Jesus’s words, she at one moment threw down her pitcher and ran to tell her fellow villagers the good news that He is that very awaited Christ, the Savior of the world (cf. Jn. 4:29, 42).

This change in the course of the Samaritan woman’s life is underscored by the authors of the stichera by this play on words: When she evasively says, “I have no husband”, she is called a “sinful woman”4; but after she has believed in Jesus as the Messiah and hastens to the town, she is called “chaste”.5

The conversation with the Samaritan woman, like the other Gospel story of the forgiveness of the adulterous woman (cf. Jn. 8:1–11), are example of situations when the Lord, without judging a person, urges him to go, and sin no more (Jn. 8:11). To His disciples’ surprise, Jesus talked with a woman, a pagan, a Samaritan, a sinner (cf. Jn. 4:27). And in another case when the scribes and Pharisees led to Him a woman caught in adultery—and such women were according to the Law of Moses supposed to be stoned—Christ turns to her with the words: “I don’t judge you; go and sin nor more”. Jesus’s reply sounded so paradoxical that certain Biblical critics still insist that this scene is not part of the original Gospel text, but was rather inserted later. However, “Go and sin no more” sounds not like an allowance of sin, not a trivialization of the weight of adultery, but like a call to man to turn away from sin and begin to do good.

Whoever gives a cup of cold water in the name of Christ’s disciple shall in no wise lose his reward (Matt. 10:42), says the Gospel. The thirst for the living word, Christian mutual help, and social care are those virtues by which the first women disciples of Christ were adorned. Mary sat at Jesus’s feet, while Martha took care of the guests. Therefore Jesus loved Martha and her sister (cf. Jn. 11:5). Mary Magdalene, Joanna, and Susanna took care for the needs of Jesus and His disciples, spending their own means (cf. Lk. 8:3). They were the first, in the ranks of the myrrh bearing women, to see the Risen Lord.

According to the apostle Paul, virtue is a woman’s greatest adornment. “I desire,” said he, that women adorn themselves in modest apparel, with shamefacedness and sobriety; not with broided hair, or gold, or pearls, or costly array; But (which becometh women professing godliness) with good works (1 Tim. 2:9–10). This same order of priority could now be applied to men also.

The Lord in the form of an ordinary man walks in our midst, seeking those who will feed Him, give Him to drink, clothe Him and give Him shelter (cf. Matt. 25:34–36), and who will give Him a cup of cold water. In exchange He has prepared oceans of Living Water. If any man thirst, He says, let him come unto me, and drink. He that believeth on me, as the scripture hath said, out of his belly6 shall flow rivers of living water (Jn. 7:37–38).

Great is the Lord’s forgiveness, and spacious are His habitations. He wipes away the tears of the weeping, grants the Earth to the meek, has mercy on those who are merciful, and adopts the peacemakers as sons. But all of us, no matter what sins we might bring to Him, should firmly remember the following words: Go, and sin no more (Jn. 8:11).

2 At “Lord I have cried”, Vespers stichera on “Glory”.

3 At “Lord I have cried”, first Vespers stichera on the Samaritan woman.

4 At “Lord I have cried”, Vespers stichera on “Glory”.

5 At “Lord I have cried”, first Vespers stichera on the Samaritan woman.

6 The Greek word, κοιλία, or “belly” is in this instance translated into the Russian as “heart”. See: A Greek-English Lexicon Of The New Testament And Other Early Christian Literature (BDAG). П. 4295. Living Waters
Homily on the Fifth Sunday of Pascha, of the Samaritan Woman
Hieromonk Ignaty (Shestakov)
Living waters will spring from him who drinks from the well. Having filled the soul with the grace of the Holy Spirit and God’s love, each of us becomes a source of this divine grace for everyone else. Escaping From the Abyss of Sin
St. Alexei Mechev

Escaping From the Abyss of Sin
A Homily on the Samaritan Woman
St. Alexei Mechev
Her life is one of the most striking examples of how the grace of God can revive even the most sinful of souls, and raise it up from the chasm of ungodliness to the heights of spiritual glory.