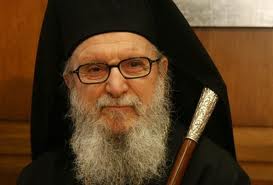 Head of the Greek Orthodox Archdiocese of America (the Ecumenical Patriarchate) Archbishop Demetrios (Trakatellis) has said he is keeping up with what is going on in Greece, especially the events that may cause the worst economic crisis in the modern history. This crisis, he says, may affect countries all over the world.

On behalf of the Greek Orthodox diaspora in America, the 87-year-old hierarch has expressed his “unlimited love” and “full support” to the Greek nation, which is suffering from the crisis, reports Sedmitza.ru. The archbishop has stressed that today Greeks should necessarily demonstrate self-control and wisdom, maintain mutual consent and keep integrity, struggling with any difficulties and situations.

According to Archbishop Demetrios, “with the help of God the Almighty” the Greek people will be able to get over the trial that has been sent them by Providence, the Romfea news portal cites the American Orthodox hierarch. Archbishop Demetrios to travel to Alabama for the 50th Commemoration of the “March on Selma”
The Greek Orthodox Church has always been an advocate for equality and continues to fight against racism, prejudice, discrimination and xenophobia with fervent love for God and all people.