Putin Defends Russia’s Ban On Youth-Focused Gay Propaganda: "I Believe We Should Leave Kids in Peace" 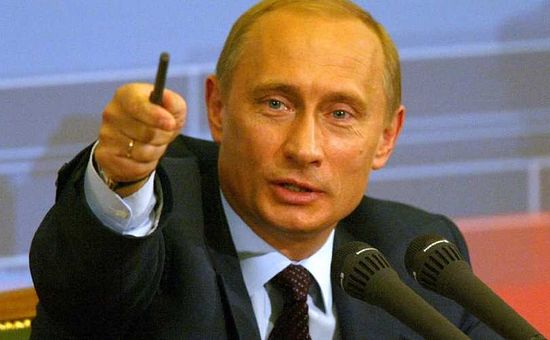 In 2013, Russia passed an amendment to the country's Child Protection Law against "propaganda of non-traditional sexual relations to minors," which also safeguards children from being adopted by homosexuals. Western governments, led by the United States, condemned the law, which has as its purpose "Protecting Children from Information Advocating for a Denial of Traditional Family Values," as hateful, bigoted, and out of step with modern societies.

The media aggressively assisted the condemnation by convincing American TV-watchers and movie-goers that homosexuality is natural and that two men "parenting" a daughter is just as good as the little girl being raised by her mother and father. Movies and TV shows made sure that casts included at least one homosexual character or couple, or episodes portrayed homosexuals as normal and well-adjusted. One popular Netflix show, House of Cards, portrayed a Putin lookalike as the Russian president, openly admitting that his propaganda law is ridiculously outdated and prejudicial but expedient politically.

On Sunday, CBS gave the real Russian president a chance to defend the law. Speaking to Charlie Rose, Vladimir Putin clarified that his country has not banned homosexuals or homosexuality, but has banned sharing homosexual propaganda with minors.

"The problem of sexual minorities in Russia had been deliberately exaggerated from the outside for political reasons, I believe, without any good basis," Putin explained.

Putin defended the anti-propaganda law as protecting children from being proselytized by gay activists. "I believe we should leave kids in peace," Putin argued. "We should give them a chance to grow, help them to realize who they are and decide for themselves." He told BBC News in 2014 that Russia's law also protects children from pedophilia.

President Putin noted that homosexuals in Russia have the same civil rights as any citizen, but they may not try to indoctrinate Russian youth. The former KGB agent concluded, "I don't see here any infringement on the rights of gay people."

The Russian leader also pointed out that Russia has abolished all anti-sodomy laws. "People of non-traditional sexual orientation work, they live in peace, they get promoted, they get state awards for their achievements in science and arts or other areas," Putin added. "I personally have awarded them medals."

Russia's anti-propaganda law was unanimously approved by the State Duma and enjoys immense popularity throughout the country. World.Mic reported that with 88% of Russians supporting the legislation, "[t]he law's massive popularity helped Putin to finally define post-communist Russia by juxtaposing it with Western society."

Significantly, the Russian Orthodox Church also supported the law. Since the fall of communism, the church has enjoyed a strong influence on both society and government. As author Alexander Webster; Fr. Victor Potapov of the Russian cathedral in Washington, D.C.; and James Jatras, deputy director of the American Institute in Ukraine, explain, over the past fifteen years, "the Russian neo-symphonia has begun to tip in favor of the Church, not the state."

Other Russian church-influenced initiatives include efforts to reduce the high number of abortions and to protect the sanctity of religious temples from vandalism and destruction.

Jatras, a former diplomat and senior foreign policy adviser to the U.S. Senate Republican leadership, told LifeSiteNews, "A lot of Americans mistakenly think of today's Russia in terms of the former, communist-ruled USSR. That assessment is not just outdated, but backwards with respect to one very crucial factor: the role of Christianity and Christian moral values in society."

Several leading thinkers in the U.S. have noted the reversal of world superpower roles, from the United States standing for morality and the Soviet Union standing for atheism to the U.S. promoting immorality around the world as Russia's government welcomes the influence of the church on society. While Russia enacts laws protecting children from sodomy and homosexual propaganda, in the U.S., "Christianity is increasingly marginalized, moral vices are officially promoted as virtues, and abortion 'rights' and homosexual 'rights,' in particular, are now key components of U.S. foreign policy."

"At a time when our U.S. federal government is exhibiting an almost Bolshevik-style hostility to Christianity, and forcing Christians to confine our opinions to the four walls of our churches, in Russia, Christianity (specifically the Orthodox Church) is the valued moral compass of the Russian state," Jatras explained to LifeSiteNews. "That means Russia's rejection of what only a short time ago were considered vices, but in America today have been elevated officially to virtues here: homosexuality (and same-sex 'marriage'), abortion 'rights,' 'transgenderism,' etc."

Jatras, who recently became the only Republican to announce his availability for the GOP vice presidential pick, concluded to LifeSiteNews, on a tragic note, "It is a mark of how far we have fallen from America's Christian founding that Russia is vilified by American elites and even some self-declared 'conservatives' – for seeking to protect children from propaganda that not long ago here would be considered 'corrupting the morals of a minor.'"

The child protection law has influenced other countries to adopt similar laws. Since the law went into effect, legislators from Eastern Europe to Central Asia have introduced nearly identical versions of legislation protecting children from homosexual propaganda. Has post-Soviet Russia really morphed into a bulwark of Christian morality?
This willingness to call a spade a spade from a stage visible to the entire world, while the leaders of the West most willing to put up a fight are currently outflanked, has drawn new attention to President Putin

Russian Orthodox official: number of abortions has plunged since fall of Communism
Alexey Komov, an official of the Family Commission of the Russian Orthodox Church, has told an Italian news agency that progress has been made in defending human life, marriage, and the family in Russia.
Comments

Boris M Garsky10/1/2015 3:52 am
One must wonder why homosexuals must propagandize the youth if homosexuality is a natural act. It goes against the very core of ones sex. As children, boys like girls and girls like boys. As adults, men love women and women love men. It is the natural law of nature; Man and Woman. The homosexuals want to forcibly revers this. How can one justify sodomy as a natural act? It is painful, disfiguring and dirty and serves no natural purpose. The homosexual community is by far the largest community of drug addicts and why? Drugs breakdown inhibition and that is why they push drugs on our children and needless to add that drugs go against natural law and are dangerous. In the USA, over 45,000 people die of drug toxicity every year, not to mention that tens of thousands who develop life long psychological and medical disabilities due to drug use. The homosexuals want to lecture, indoctrinate our child, but they do not want to be lectured to, or indoctrinated; such blatant, though consistent with them, hypocrisy.
×