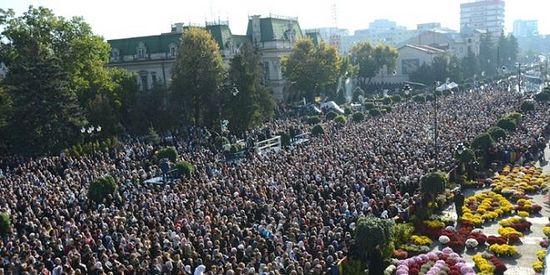 The pilgrimage St Parascheva is one of the largest in Eastern Europe.

Up to half a million Romanians are expected to take part in a three-day pilgrimage to a saint's shrine, which started on Friday.

Believers are lining up in queues stretching for miles to venerate the relics of St Parascheva, which lie in the northeastern town of Iasi.

The pilgrimage is one of the largest in Eastern Europe, drawing people all over Romania as well as from neighbouring Orthodox countries, who come to Iasi to pray mainly for health and for God's blessings.

This year, for the first time, the saint's body, wrapped and preserved in a casket, will not be displayed alone but will be accompanied by a relic of Mary Magdalene, brought from Mount Athos in Greece. A piece of wood from the Holy Cross has also been brought to Romania.

The saint’s hand is said to be incorrupt and to give off a bodily warmth as if she was still living.

"I am so happy to go for the sixth consecutive year on pilgrimage to St Parascheva. Every time I felt great joy and peace in my heart, and I am sure this will be the case again,” Ioana Stoica, 56, said before departing to Iasi from the capital.

The pilgrimage is not only a religious event but also important for tourism, contributing a good deal of cash to the local economy. Pilgrims are expected to spend some 13 million euro, according to reports, while hotels and guesthouses in Iasi are fully booked.

Parascheva is the patron saint of the Moldavia region of eastern Romania. Her remains arrived in Iasi in the 17th century, after being kept in Greece, Bulgaria and Serbia.

More than 85 per cent of Romania's 19.5 million people belong to the Orthodox Church, which has enjoyed a revival since Communism fell in 1989 and is strongly supported by around 67 per cent of Romanians, according to public opinion surveys.

In recent years, the Orthodox Church has started to use new media in order to stay close to believers, running a website, TV and radio stations and its own daily newspaper. The Miraculous Relics of St. Joasaph of Belgorod

The Miraculous Relics of St. Joasaph of Belgorod
"At the time I was studying at St. Petersburg Theological Academy. I had much knowledge, but no real faith. There were ceremonies associated with the opening of the relics of St. Joasaph and I attended them unwillingly, thinking about the tremendous crowds of people thirsting for a miracle. How could miracles happen these days? ...I returned to Petersburg as another person—a believer." Greek liberals are displeased with bringing of relics of St. Barbara to the country
An influx of a great multitude of faithful to the holy relics of Greatmartyr Barbara has produced an immense impression on the Greek secular media. The journalists call the number of those willing to venerate the relics “unprecedented” and they are trying to explain the reasons for this phenomenon.

A portrait of elder Arsenie (Boca) is “weeping” in Vaslui, Romania
Residents of the Romania’s Vaslui county are convinced that late Hieromonk Arsenie (Boca; 1910-1989, a prominent elder and confessor) is truly working miracles.
Comments

David Abejje2/1/2016 11:22 am
i am from Eritrean orthodox church and am so proud with ur arrticles.i need alittle information about ur page.thank you!
×