A Miracle on Christmas Eve

When Christmas Eve comes, how we wish for a miracle! And miracles really do happen. These two stories were found for us by Maria Saradzhishvili on the pages of Georgian periodicals. They are not only miraculous examples of God’s Providence in life, but portray the hearts of people filled with great nobility, self-sacrifice, and love. And of course, faith in God. 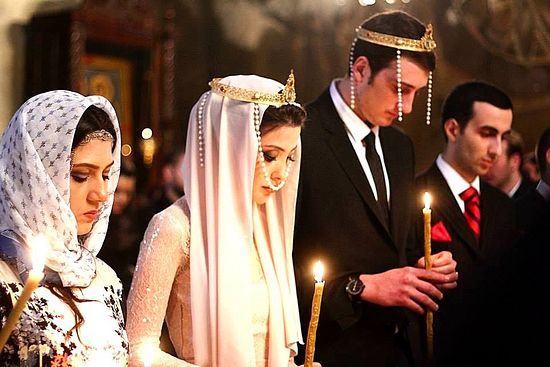 The first story. About an abortion that didn’t happen, a blind man, and a seeing heart.

This happened to a friend of mine a long time ago.

Nino moved to the city to study. She was seduced by a married man. She became pregnant, and the rest unfolded according to the usual pattern: The guilty party gave her money for an abortion. But Nino already loved her unborn child and rejected this idea. She well knew that her strict father and brothers would not forgive her this mistake, but returned home anyway to her village in her seventh month of pregnancy. New Year’s day came, and she hoped that this fairy-tale night might work a miracle, that her family would forgive her and forget everything.

But unfortunately, this did not happen. Even her mother did not defend her own pregnant daughter. To the contrary, she gave her some “wise” advice: “Everyone is resting now, and won’t pay any attention to us. Right after Christmas I’ll take you to a midwife I know. There you can have your baby in secret. Then they’ll sell it to someone. It’s a good thing that there are so many childless people—it won’t take long to find a buyer!”

Nino decided to run away. Then on Christmas Eve she found an opportunity. She walked a long time through the woods so that no one would see her. She didn’t even feel the cold for fear. She walked out of the grove when it was completely dark, and approached the first house she saw. A young man was standing in the doorway. Nino looked and called out to him. He moved in the direction of the gate and asked, “Who are you? I don’t recognize your voice.”

“I’m not from here. I have run away from home,” Nino answered, not seeing in the darkness that the man was looking right past her.

“Mama!” the young man shouted, turning towards his house. “It’s a Christmas mekvle1 who’s come to us!” Then he felt his way to the gate and opened it.

“Could he really be blind?” thought Nino as compassion struck her heart.

Out of the house came a middle-aged woman, wiping the flour from her hands on her apron.

They led Nino into the house, fed her, and listened to her story.

“I won’t give my child away. I’ll die without him,” Nino told them. “I don’t know how but I’ll save him. If you’ll allow me, I ask you to let me spend the night here. I am afraid I’ll get sick outside. God will reward you for your kindness.

“Mama!” exclaimed the blind young man, his voice breaking. “God has sent me this girl after so many years of suffering.”

Then Nino listened to his amazing story:

“Four years ago I was the happiest man on earth. I loved a beautiful girl. She was already pregnant by me. We decided to have the wedding after Christmas. We greeted the New Year together. I took a rifle outside to shoot it at twelve o’clock. It exploded in my hands. The doctors could not return me my sight. When my fiancé heard the diagnosis she got scared of living her life with an invalid and broke off the engagement. I begged her to have her baby and give it to me to raise, but she had an abortion anyway. It’s hard to describe my suffering in words. Only my pity for my mother kept me from killing myself. Do you believe in miracles? After all, it’s no accident that after walking all this way you came knocking at our gate and no other. I don’t dare ask you to stay. But please let me take care of your baby who is just about to be born.

Nino had tears in her eyes and nearly kissed his hands. They met Christmas together. In the morning Nino’s abdomen ached. She was frightened—the child was only seven months old. It was too late to go to the hospital—the birth pangs had begun. Tedo’s mother, Tamara, set about helping her give birth. “I’m only a veterinarian but I do know a little about gynecology!”

In the morning a baby boy was born.

Tedo’s friend called a doctor, who after looking over mother and child said that it was not necessary to take them to the hospital. Tamara set the table. Nino wanted to name the boy after the man of the house, but the blind one asked her not to: “Since God has given you to me on such a great day, it’s better to name him Khvisto!”2

Thirty years have passed since that day. Everything worked out for the best. Tedo and Nino were married. They had three more children after Khvisto. The eldest went to school, became a doctor, and married. His primary plan was this: to operate on at least one of his father’s eyes, to give him back his sight. Tedo believes in him and hopes—because he knows that nothing is impossible.

The second story. About a wallet lost and love found

From my childhood I believed and all my life I waited, that one day, on Christmas Eve, a miracle would unfailingly happen to me. But the years went by, and nothing special ever happened. Nevertheless, I never lost hope that happiness would smile on me. Despite my age (I’m thirty years old), I am the same romantic I was as a child.

I was never very lucky in the material sense, and for various reasons I never managed to start a family, but deep inside I always believed that some day everything would change.

That year on December 25/January 6, my friend called me and invited me to her home for Christmas. But I declined, because I had no more than two laris in change in my pocket, and no money for the trip, never mind for a gift. But my friend immediately guessed the reason for my refusal and made me promise to come no matter what. I stood my ground but she said, “Get in a taxi; I’ll meet you below and pay for it!”

I had to accept.

We spent the time splendidly, and had a joyful Christmas. When the sun rose, everyone went his own way. My friend forgot to give me money for the road and I did not remind her. So, I went on foot.

I walked and thought about my loneliness, about how I dreaded returning to an empty apartment. It’s dull to celebrate the feast and then go the next day to a job I hated. I even cried out of self-pity. Then suddenly I tripped over something, and I saw a large wallet lying on the road. I opened it and was shocked: it was stuffed with dollars and euros. I stopped and waited. I thought, the owner would come to this place looking for it and I would give it to him. I stood for a while, but no one appeared. I was freezing, and so went home.

At home I looked through the wallet and found only an insurance policy. A first and last name was shown on it. Then I sat down at my computer and searched for the owner with this information. Finally, I found him. I wrote to him that I wanted to meet him, and asked him to send me his address, explaining that I would arrive in a half hour.

Do you believe in love at first sight? I didn’t either. But that is just what happened to both of us at the first meeting. George was not alone when we met. He had two friends over. He was clearly out of sorts, but he met me, an unfamiliar woman, very politely. He placed some sweets on the table, poured some cognac, and wished me a merry Christmas in broken Georgian. All the while he never took his ecstatic eyes off me. I was also nervous, because I would have to tell him the reason for my visit. I was also feeling some inner fluttering: I had fallen in love with this stranger from the first sight, although I didn’t know whether he was married or not. Finally I took the wallet out of my pocket. Wanting to show that that it was really his he described everything it contained. Then George drove me home and told me along the way that he lived in America for fifteen years now, and had come to Georgia on business for only a month. Then he emphasized that he was not married but wants to get married—only to a Georgian girl. Then he asked me a few questions and we parted. Two days later he came to my home with a huge bouquet, champagne, and a cake. We talked for a little, and then George proposed. I was so thrown off that I couldn’t say anything. I only tried to talk him out of it, saying, “You don’t know me at all.” George laughed and said, “You can’t even imagine how well I know you. As long as I am here we will meet every day, and you will get to know me better. I don’t want to lose you, because the Lord gave you to me on Christmas, and I fell in love with you immediately!”

Of course I agreed to marry him. It seems to me that we are the happiest couple on earth. At the end of January we are going to get our civil documents and be wed in the church. Then we are supposed to go to America.

It’s hard for me to leave everything here so abruptly, but George promised that we would come to Georgia often, and in a few years we’ll return to our homeland to stay.

So, I wish for you all never to loose hope. On Christmas night, it’s really true that miracles do happen.

1 The first person to come into a home on Christmas or New Year with sweets and wishes of prosperity for the family. Charity at Christmas
Fr. Ted Bobosh
You won’t need security or guards to protect your goods – you put them in God’s hands and God will protect them.

Another Way
Fr. Seraphim Holland
Here is what I want to share with you from my heart. When the wise men had finished worshipping the Lord Jesus, Being warned of God in a dream that they should not return to Herod, they departed into their own country another way (Mt. 2:12). This is very significant. Every time I read this, I am filled with great joy. There is another way, brothers and sisters.
Comments