Flowers of altruism out of the field of Cameroon 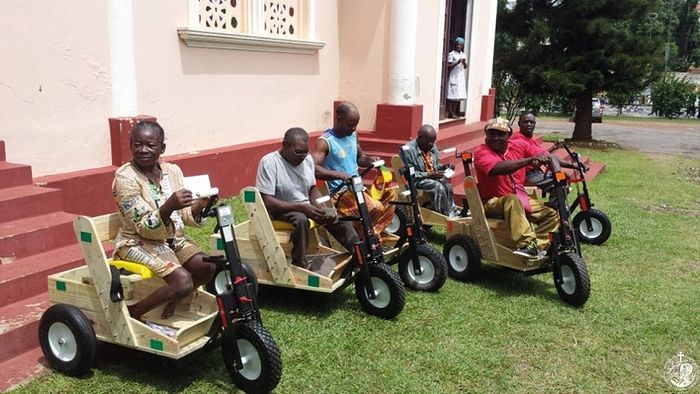 "When times are adverse, it is an honor to fly
all alone, all alone"
-Chainides

Dear brothers in Christ, rejoice in the Lord always,

It is a fact that the difficulties which our homeland has been going through during the last years have had a serious impact on several areas of the apostolic work – as it has come to be expressed in the vineyard of Africa over the past 60 years.

However, despite all the hardships, we can say that we continue walking by the grace of God, our living Lord, who walks by our side daily through our difficulties and “by many proofs” blesses and transforms our little efforts and our mumble into a fruitful and plentiful seed.

With the “holy contributions” of our brothers from every corner of the world, we try to comfort the needs of our African brothers, especially those belonging to "vulnerable groups”, such as the disabled, who often, due to lack of care and a basic means of transport, they cannot participate in social life with the same rights as the able-bodied ones. Moreover, in Africa, apart from the marginalized position they have in the society, surviving through begging in deplorable conditions, they also go through a lot of suffering due to social bias and unimaginable superstitions, all of which results in making even the simplest daily tasks far more difficult for them, as if their daily toil was not enough.

In cooperation with the International Orthodox Christian Charities (IOCC), the official charitable agency of the Orthodox churches in the U.S.A., we received a number of wheelchairs and various other aids for the disabled, which we sent to the Ministry of Education of Cameroon for mobility-impaired students, and which unfortunately due to the absence of budget provision for their distribution to the schools of the country, mostly remained in warehouses.

Starting with people we met on the streets and relying on information which we gathered, we were able to distribute almost all of what we had received.

May the excitement, gratitude and wishes of the recipients be an eternal testimony and prayer before God’s throne for those who variously contributed to this effort.

Another donation for the repose of a departed brother was used in part for the support of the disabled people’s families and for the purchase of food supplies for orphaned children’s homes. 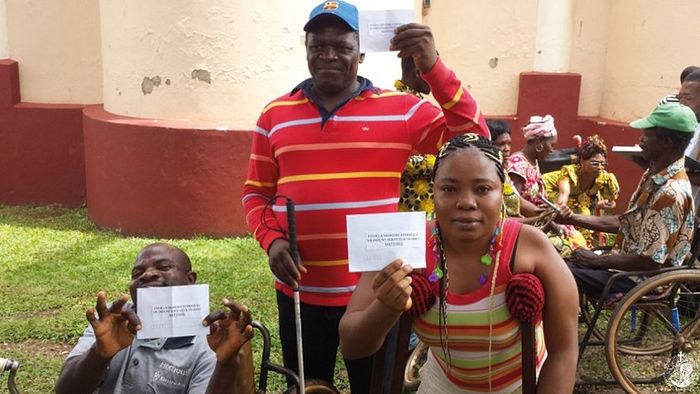 Many times, it is difficult to describe such situations … Nevertheless, we will describe an incident, so that you can better understand what we mentioned on the difficulties of the disabled, who ceaselessly cry before us “I have no man” (John 5:7). Once it became known that the Orthodox Church was giving out financial aid to disabled people, one day, when we had already finished with those gathered, we saw a handicapped running towards us in a wheelchair, pushed by a big sweaty man … We thought he would be a relative of his, but when he approached, we realized that the man pushing was blind! Together they had crossed a huge distance through the heavy traffic of the busy streets. The disabled man was guiding his blind brother, hoping in the mercy of God, which in that case was the small aid of our Church …

With the contribution, sensibility and understanding of Saint Ecumenius Missionary Association, we bought five motorcycles for five priests, each of whom ministers to more than two parishes, in order to reduce their travel expenses and enable our remote communities to be served regularly and not infrequently due to transport difficulties of the priest in charge.

Acts of altruism and charity are secret according to the command “let not your left hand know what your right hand does” (Matthew 6:3) and they are not kind of ecclesiastical news, because they are inseparably woven into the life and nature of the Church. They are, however, occasionally published as a testimony of love, as flowers of altruism, for the “subtle thought” of our weak brothers “that the ministry be not blamed” (II Cor. 6:3). 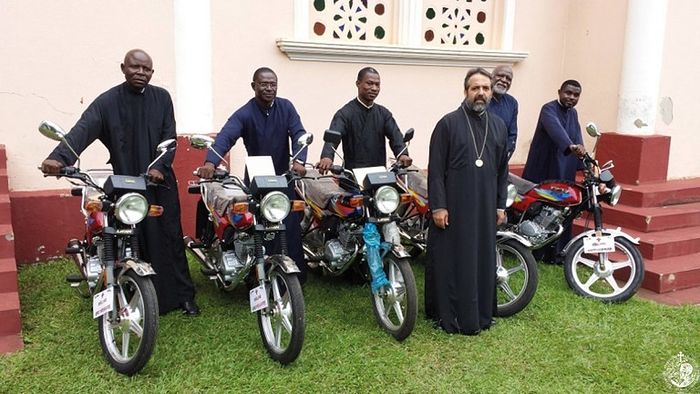 Nevertheless, they are also testimonies of those, who in adverse times and in the face of those that out of poor ecclesiastical education and nonexistent faith, in covert deeds and words, consider the cause of the apostolic work “failed” or “unnecessary” and shamelessly vilify it, continue to “guard a Thermopylae never betraying what is right …”

May the love of our Lord Jesus Christ be with you all, brethren. I Came to Cast Fire Upon the Earth
Bishop Amphilochios of New Zealand
With the help of our Good God three projects have been completed in Fiji: the majestic Holy Trinity Sacred Church, the St. Tabitha Orphanage and the Home for the unprotected women known as “Safe Home”.