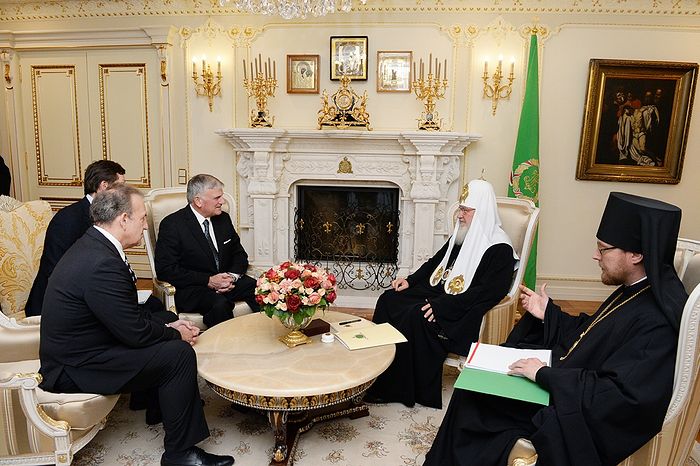 The Billy Graham Evangelistic Association and the Russian Orthodox Church will be hosting a summit in Moscow on religious persecution, the Rev. Franklin Graham announced today.

"I was in Russia this past October and met with Patriarch Kirill, the head of the Russian Orthodox Church, and evangelical leaders, and we discussed at length the persecution of the Church worldwide," Graham wrote in a Facebook message Wednesday, explaining the roots of the summit, which will be held in October.

"The World Summit in Defense of Persecuted Christians will shed a global spotlight on this crisis. We will bring delegates from around the world and will be able to join hands with people of other churches and denominations of the Christian faith to pray for our brothers and sisters in Christ and to hear firsthand reports of the suffering that is taking place."

Graham also referenced the Orthodox Church's own history of persecution, especially during most of the 20th century under Communism.

"In the years under Communist rule, virtually all of the priests, pastors, and church leaders in Russia were imprisoned or executed by the Communists, and their graves are on the outskirts of Moscow and throughout the country serving as a reminder," continued Graham.

"No church in modern history has suffered more than the church in Russia. … So Moscow will be a fitting and meaningful location for this much-needed summit."

Graham's announcement came off the heels of a report by Open Doors USA that 2015 was the worst year for Christian persecution globally in the modern era.

In 2015 an estimated 7,000 Christians were killed for their faith, which was a 50 percent increase from the year before.

"Islamic extremism continues to be the primary driving force behind the expansion of persecution," stated Open Doors President and CEO David Curry.

"It is no longer just a Christian problem, but a global problem that must be addressed. … As the dominant power in the free world, [the U.S.] must lead the charge in bringing more relief and aid to those suffering."

The summit comes as a collaboration between two groups, evangelicals and Orthodox, who have not always been on good terms.

In 2011, CBN reported on the concerns some Russian evangelicals had about the growing power of the Orthodox Church in the former USSR.

"Since the early 1990s, the Church has grown in size and influence as its relationship with the Russian government has improved significantly. However, that cozy relationship worries the country's evangelicals," reported CBN.

"The Orthodox Church's biggest competitors are the evangelical, charismatic congregations, which are experiencing tremendous growth." His Holiness Patriarch Kirill: An attempt to expel Christianity from the Middle East is a tragedy of historic scale that affects the whole world The Christian and Peace. Address by Rev. Franklin Graham, President of Billy Graham Evangelistic Association, at International Conference on Religion and Peace (Moscow, 29 October, 2015)
Franklin Graham
I cannot help but note also, Your Eminence, that my father returned here in 1988 to join in celebrating the 1000th anniversary of the baptism of Prince Vladimir of Rus, and the founding of the Russian Orthodox Church. I was deeply moved, Your Eminence, when I learned that this year – 2015 – marks the 1000th anniversary of the death of Prince Vladimir. On behalf of my father and my fellow believers in the United States, I extend to you our most respectful congratulations on this historic occasion.