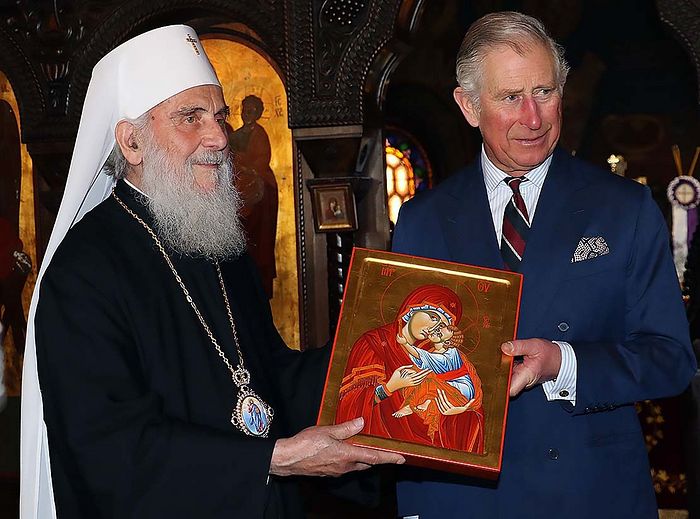 The Prince of Wales met with Patriarch Irinej of the Serbian Orthodox Church in Belgrade on Wednesday.

Prince Charles – known as a great advocate of dialogue among the world’s most widespread religions – previously took part in an interfaith dialogue of representatives of Christian, Islamic and Jewish communities at Princess Ljubica’s Residence.

Earlier on, Prince Charles and his wife, the Duchess of Cornwall, took a walking tour of Kalemegdan, after which the prince walked to Princess Ljubica’s Residence, while the duchess visited the Home for Children without Parental Care, where she met with representatives of UNICEF and the Novak Djokovic Foundation.

Later in the day, the prince is scheduled to visit the Cathedral Church of Saint Sava, whose history also links the peoples of the United Kingdom and Serbia.

British missionary and benefactor Francis McKenzie, who lived in Belgrade from 1876 until his death in 1895, is among the few foreigners whose names are on the list of the church’s major benefactors. Defender of the (Eastern) faith

Defender of the (Eastern) faith
Prince Charles has a new obsession as strong as his passions for ecology and architecture. He is refusing to stand idly by as Christians are driven out of the Middle East Prince Charles speaks of 'soul-destroying tragedy' facing Christians in Middle East
&#8203;Addressing the congregation of the St Yeghiche Armenian Church in South Kensington, London, the Prince of Wales said that the faith was "quite literally, grotesquely and barbarously assaulted".

Prince Charles speaks up for persecuted Christians
Dubbed by the media as an “Arab Spring” or “Arab Awakening,” these events in the Middle East must be reexamined, as they more closely represent a “Tragedy for Minorities” rather than the democratic rebirth that the former names seem to describe.
Comments
×