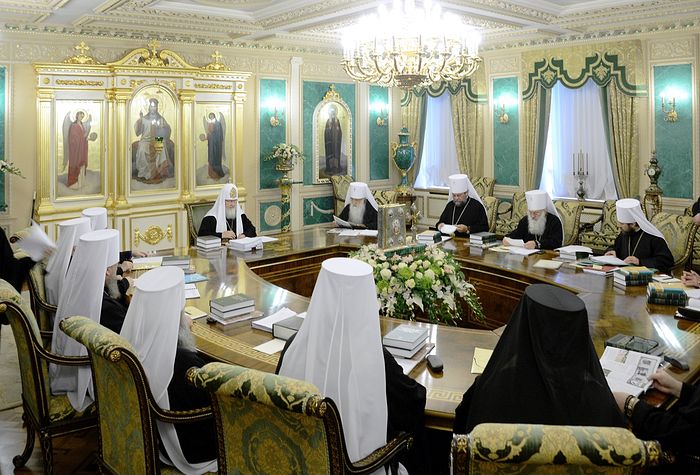 During a meeting of the Holy Synod of the Russian Orthodox Church in Moscow on June 3, 2016, it was noted that as the Pan-Orthodox Council approaches, serious problems have arisen demanding immediate action throughout the Orthodox Church.

“The decision of the Holy Synod of the Bulgarian Orthodox Church of June 1, 2016, as well as the continuing uncertainties regarding the possible absence of the Antiochian Patriarchate from the Holy and Great Council, as well as the absence of a preliminary consensus on the proposed Regulations of the Council and the document titled ‘The Mystery of Matrimony and Obstacles in Its Way’ mean that at the present time, with the opening of the Council scheduled for only two weeks from now, there are serious problems which demand immediate pan-Orthodox actions,” reads the decision of the Holy Synod.

The Holy Synod confirmed the corrections made by the Russian Orthodox Church in other draft documents: “The Relationship of the Orthodox Church Towards the Rest of the Christian World” and “The Mission of the Church in the Contemporary World.” The corrections were formulated on the basis of opinions expressed by bishops, clergymen, monastics and laity. The decisions of the Synod indicate that the results of discussion of the drafts for the Pan-Orthodox Council on the part of Georgian, Serbian, Bulgarian and the Greek Orthodox Churches, as well as the Holy Kinot of Holy Mount Athos also introduced significant corrections, in many ways echoing the proposals of the Russian Orthodox Church, which demand serious examination with the goal of seeking out an all-Orthodox consensus.

The Holy Synod noted that the absence of even one of the Churches from the Council will amount to an insurmountable obstacle in convening a Holy and Great Council, taking into account that its decisions can only be adopted on the basis of consensus, in accordance with the regulations contained in documents approved by the Council of the Primates of Local Orthodox Churches.

In accordance with the decision of the Holy Synod, one way out of this extraordinary situation would be to convene an extraordinary Pan-Orthodox Pre-Council Assembly to consider the situation as it has evolved and the examination of the corrections of the draft documents submitted by the Local Orthodox Churches with the aim of developing unanimous proposals. The conclusions of such an assembly, as the Holy Synod declared, could lead to a decision regarding the possibility of convening the Pan-Orthodox Council at the scheduled time.

ROCOR HOLY SYNOD on Pan-Orthodox Council Texts
Communication of the Holy Synod of the Russian Orthodox Church Outside of Russia to the Clerics and Faithful—13 April 2016.
The process of addressing the pastoral needs of any given age is one which requires both tremendous prayer and ascetical devotion from all Christians, but also the dedicated, deliberate work to ensure, in any document the Church may put forward, the faithfulness to the Gospel we have inherited. All such texts, now as throughout history, go through many stages of preparation and revision; and the fact that we, together with others, have identified serious problems with some of the documents pending consideration by the forthcoming Council should be a cause for neither fear nor anxiety. The Holy Spirit Who always guides the Church in love, is not far from us today; and the Church is not in our times, nor has she ever been, without the active headship of her True Head, Christ our God, Whom we trust with full faith will guide His Body in all truth.
Comments

Kostas Langis6/6/2016 9:29 am
As a lifelong member of the Greek Orthodox Archdiocese under the Ecumenical Patriarchate its obvious that its time for Bartholomew to go. Bartholomew is a heretic and the entire Ecumenical Patriarchate needs to be purged. To claim that the one, holy and apostolic church has always recognized churches outside her is simply a lie. Who are these Fathers that taught this? Which canons speak of such blaphemy?

Why does this heretical document forbid what it calls 'proselytising' in a generic vague way which includes the avoidance of conversions to our Church?. Why does this document not clearly state that heretical bodies looking to proselytise those of the one, holy, catholic, and apostolic church will be condemned by name at a council and that it is the duty of our church to make disciples of all nations?

I can go on and on. But the point is I am a Greek Orthodox christian, that is why i disagree with bartholomew and view him as a heretic.

H Zachariades6/4/2016 8:45 am
We pray that ROC will take into account the views expressed in the letter of Mount Athos elders to the EP. The whole world looks up to ROC to protect sacred tradition.
×