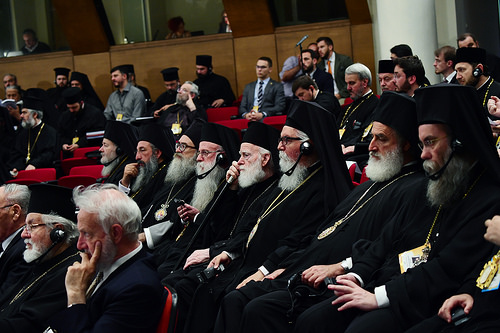 According to Metropolitan Ignatius of Demetrias and Almyros, the first of six texts up for discussion, “The Mission of the Orthodox Church in Today's World” was unanimously approved at the afternoon session on Monday, June 20 of the council on Crete, reports panorthodoxcemes.blogspot.ru.

The text is the result of the fifth pan-Orthodox pre-conciliar conference held in Chambesy, Switzerland in October 2015 and was signed by the primates of all Local Churches, except for that of Antioch, at the meeting in January 2016.

The text, largely bearing the stamp of Met. John (Zizioulas) of Pergamon, was passed unanimously with minor changes. The amendments proposed by Met. Hierotheos (Vlachos) in a letter to the Church of Greece on March 5, 2016 were rejected.

Michel6/22/2016 12:04 am
"We have had councils that were not attended by all the churches. An Ecumenical Council gathered without the presence of the Church of Antioch. Nevertheless, the council was later received as the Third Ecumenical Council. In 1872, a pan-orthodox council gathered in Constantinople with the absence of the churches of Russia and Bulgaria at this council. We hope that this Holy and Great Council will initiate a new process of the Orthodox Church. We need it on an internal level and on a worldwide level." - ARCHBISHOP JOB OF TELMESSOS

Ian Buckmaster6/21/2016 10:42 pm
The word "unanimous" is being thrown around this council without any real definition. It was considered "unanimous" by them because they have created a system in which the advocates of the documents just need one vote to throw out any proposed amendment (because the proposals for amendments are actually required to be totally unanimous amongst those present). Even if all but one church votes for an amendment, one church (pretty much the EP) is all it takes to counter it. But they still then consider the document "unanimously" agreed upon because they claim the signatures obtained back in January grants validity to it. What is ridiculous about this view it that it means this "council" is not the council as much as a review meeting because the only real decisions were made in Chambesy back in January.

Adam6/21/2016 1:20 pm
It's not unanimous if Antioch didn't sign it. This false and misleading wording keeps being used in texts that are going out about the council. This article briefly mentions Antioch's stance, but then goes directly stating a unanimous vote.
×