Bartholomew to Ieronymos: I am not claiming the “New Territories” 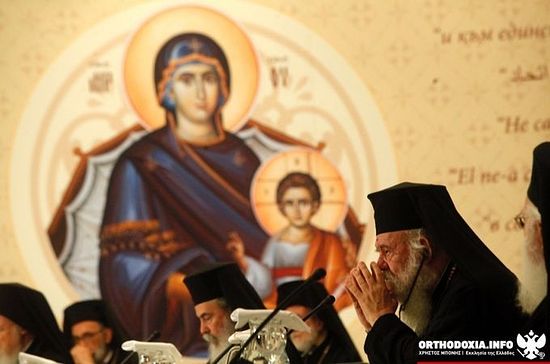 The Patriarchate of Constantinople is not planning the return of the “New Territories” to its immediate jurisdiction, as Patriarch Bartholomew stated to Archbishop Ieronymos of Athens during a meeting of the Crete Council, writes Orthodoxia.info.

Today the primates and bishops participating in the Council are discussing the draft document on the mechanism for granting a Church’s “autonomy.” The Greek Church had already proposed an amendment to the document.

Immediately after the proposal of the amendment, the Patriarch told the Archbishop that, inasmuch as the question of the “New Territories” is the cause of misunderstanding on the part of people who seek complications in the relations between the Phanar and Athens, the Patriarchate makes clear that these dioceses, as is known, belong to it, but neither now nor in the future is there any intention of changing their status.

During the discussion, the Patriarch of Constantinople expressed his conviction that the dioceses of Crete and the Dodecanese belong to the Constantinople Patriarchate “no less than to Greece …”

Note that there is a dispute between the Greek Church and the Patriarchate of Constantinople over the northern territories of Greece, which are practically speaking part of the Greek Orthodox Church although formally subject to Constantinople’s jurisdiction. On August 29, 2015 the hierarchs of the “New Territories” participated in a hierarchical synaxis of the Patriarchate of Constantinople which aroused the protest of the Greek Church and its refusal to participate in the gathering of the primates of the Local Orthodox Churches in Chambesy.

Fr. Nektarios6/22/2016 9:27 pm
The author of this article should take the time to read His All Holiness' comments in their completeness.
While His All Holiness made note that the "New Territories" belong spiritually to the Ecumenical Patriarchate, and administratively to the Church of Greece, he also stated that there is NO PLAN TO ASK FOR THEM BACK. (Source: Romfea.gr)
×