The Spiritual Meaning of the Feast of Sts. Peter and Paul

Archpriest Artemy Vladimirov discusses the spiritual meaning of the feast of Sts. Peter and Paul; why these very different individuals who became followers of Christ in very different ways are commemorated together; and how their personal qualities should become examples for us. 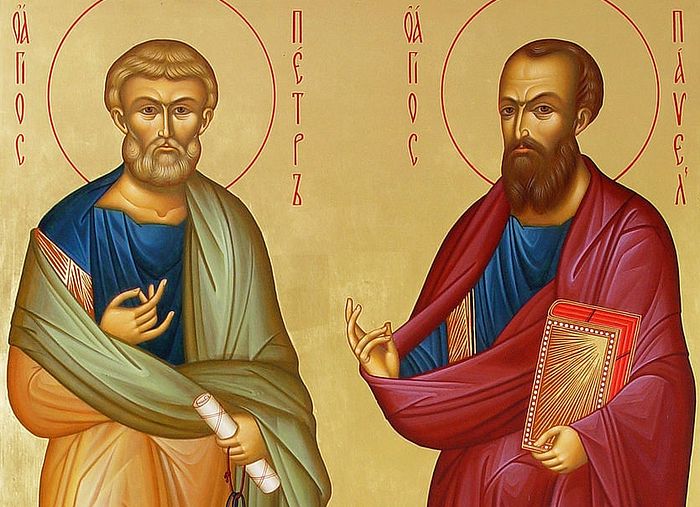 Dear friends, behind us is the Apostle’s fast, which by God’s mercy was observed only by those Local Orthodox Churches that are true to the Julian calendar as to the sun. And we truly delight in this great time, recalling the very reason why in deep antiquity this fast was introduced at the threshold of the feast of the chief apostles Peter and Paul. And why was this fast established?

In the Acts of the Apostles we discover that twelve chosen disciples of the Savior were abiding in prayer and fasting before ordaining their co-laborers, whom the Holy Spirit was to set apart for travelling and spreading the Gospel. Among the great apostle’s comrades at arms were Sts. Barnabas, Silas, and Mark—all were disciples of the chief apostle Paul. It follows that the fast is very helpful to us, because by repressing the body and limiting its needs, giving freedom to the spirit, we acquire the ability to pray attentively, fervently, and to express our thoughts in words that are simple, clear, and beautiful—which we need in order to serve our neighbor in a spirit of love and truth.

So, now the lesser summer fast is over, and we gaze with our spiritual eyes upon two brothers in Christ—Sts. Peter and Paul, who according to tradition died in the sixtieth year after the birth of Christ in the “Eternal City”, Rome, having received a martyr’s death. They still are a kind of “sentinel of love”, whose prayers uphold the whole world, so that in accordance with the ancient Psalter verse, Their sound has gone forth unto all the world, the voice of Sts. Peter Paul are heard unto the ends of the earth (Ps. 18:5).

Let us recall Peter, who surpassed all the other apostles in age and life experience, and stood out for his particular fervency and impetuosity. When the disciples were fishing and a Stranger appeared on the shore, the virgin John the Theologian recognized Him as the Lord, and Peter without thinking twice threw himself overboard so that he could reach the shore faster and fall at the feet of His beloved Teacher, Whom he had denied out of faintheartedness but Who restores him and rewards him with ardent tears over his own unworthiness. And may God grant that we too would adopt from the Apostle Peter this living and zealous spirit, this fervency for repentance, in acts of mercy. For today’s Christians are often lukewarm, lethargic, relaxed—they lack that spiritual gusto, that joy in Christ, which can be heard in the words of Simon Peter, standing out from the other apostles. At the Savior’s question, “Who do you think that I am?” Peter answered on behalf of all the others, “Thou art the Christ, the Son of the Living God.” This was Peter’s confession, which made him the rock—strong, like a rock—and thanks to this Peter received, as did the other disciples, the grace-filled keys of the priesthood; this confession lives in the Church, on our lips and in our hearts every time we secretly turn our souls to the Savior and call upon His most holy name, “Lord Jesus Christ, Son of God…” and then add the prayer of the publican: “Be merciful to me, a sinner!” “Have mercy on me a sinner!

Accordingly, if any of us feels this captivity to sloth, lethargy of movement, the lack of desire to bridle our own bodies as we should, then it would be good if the spark—“O burn, burn brightly, be not extinguished!”—of the grace of the Holy Spirit might always vitalize our initiatives, illumine our thoughts, and work together with our good undertakings. We must hide Peter’s confession in our hearts; let it shine there like a pearl, and we, drawn by the rays of this spiritual light, will call upon the Savior at all times and in every place: “Lord Jesus Christ, Son of God, have mercy on me a sinner.” And this prayer will become for us either a staff, or a vessel of cold water, or heavenly bread, which strengthens us spiritually and physically. For one who loves God this prayer is air, light, rest, clothing, shield, and sword, of which St. Peter himself convinces us, since he died as a martyr for the Lord, counting it happiness to spill his blood for Him, and to this day embraces the whole world with his prayers.

But we will not forget the chief apostle Paul. You recall this disciple of Christ, who was converted into a follower of Jesus not by a man, nor by Scripture, but by Divine revelation when on the road to Damascus he fell down, blinded by divine light, and learned that it was difficult for him, Saul to kick against the pricks, that he was very guilty before Jesus, Whom he persecuted by tormenting the primitive Church, torturing its brothers and sisters, subjugating the Lord’s followers to torments. And he was baptized and became strong, having received the gift of the Holy Spirit.

He was the inheritor of exclusive spiritual gifts, taken up to the third heaven, knew foreign languages, possessed the gift of prophecy and elucidating prophecies, a builder of the Church, and a knower of fallen human hearts. However, Paul did not exalt himself as we do; he did not suffer from self-assuredness, a treacherous feeling of his own exclusiveness—but always and everywhere humbled himself before the Lord in dust and ashes and left us as an inheritance this confession, which God forbid we should forget for even a half day: This is a faithful saying, and worthy of all acceptation, that Christ Jesus came into the world to save sinners; of whom I am chief (1 Tim. 1:15). This is the moral confession of the apostle Paul, which makes the little great, the weak strong, the coward brave, the impure chaste, the depressive and sorrowful filled with higher life and joyful energy.

Why is it so important for the apostles to confess that they are the least among all other people? Why is it so important to put yourself in the last place, and not push yourself forward? Why does humility have such beneficial consequences for the immortal human soul? Only because God resists prideful people, people who exalt themselves, who are inclined to judge, who have contempt for others. Self-infatuated narcissists who think very highly of themselves are continually falling into the pit that they dig for themselves by their critical judgment of other people. And on the contrary, grace works together with those disciples of Christ who are humble and modest, who know how not to think highly of themselves, who defer to those stronger and superior to them in all respects.

The Apostle Paul teaches us that we Christians should not think of ourselves as distinguished from our brothers and sisters. He had none of that rotten individualism and egoism, as we would say today. In attentively reading and re-reading the epistles of the Apostle Paul—and we have fourteen whole epistles—you will find wondrous revelations of our oneness, our unity with Christ and in Christ. Inasmuch as a person confesses an egotistic philosophy, considering himself a lonely sufferer or an unrecognized, unaccepted genius in this world, he sets himself contrary to his neighbor—and such a person is condemned to suffering. But just as soon as we feel that we are members of one family, just as soon as we start thinking of ourselves as a leaf attached to the same branch and thus making up part of the tree’s crown—I mean the Mother Church, the vineyard of Christ, into which we have been grafted through the Sacrament of Baptism—as soon as the feeling of real fraternity and unity in the Lord awakens in us, our life, dear friends, begins to change for the better; and witness to this is the apostle Paul. He did not live for his own gain, there was no lucre in him, no low forms, but he beheld all of mankind in the person of God’s chosen ones—those who desired to received Baptism and enter the bosom of the Mother Church. He beheld them as a happy family in which everything should be built upon the foundation of mutual love and brotherhood. This is why the apostle Paul, as if addressing himself to the proud twenty-first century, teaches us not to exalt ourselves above our neighbor but to follow after the humble, not think highly of ourselves, but to confess ourselves as the worst sinners before the face of the Lord.

And if we unite these two virtues that we are discussing today as applicable to the apostles Peter and Paul—Paul’s humility and Peter’s burning faith in Jesus Christ the God-man, if we add also the modesty and self-reproach of the apostle Paul and Peter’s joyful striving to serve the Lord, to get closer to Him, to hold on to the hem of His garment, as Peter said, Lord, to whom shall we go? Thou hast the words of eternal life (Jn. 6:68), then humility, prayer, and love, united in our souls, will make us happy, peaceful, calm, balanced, sober-minded, having sympathy, compassion, and empathy with people who bear Christ in themselves.

The day of the holy apostles Peter and Paul completes, as we recall, the summer Apostle’s fast. May God grant that today, after having been vouchsafed Communion of Christ’s Holy Mysteries, as the apostle Paul teaches us, having tested our own conscience, approaching the common chalice with reverence, we have taken out of the church the grace of the Holy Spirit—the grace that the chief apostles bear even today, the grace that they witness in their writings, the grace that is the true treasure and inheritance of every Orthodox Christian. May it be spread about as living water through us, through our lips and deeds, and give drink to all our relatives and neighbors near and far. And we Orthodox Christians, confessing ourselves as the worst sinners, shall be fragrant, in the words of the apostle, with the fragrances of joy, peace, and love, witnessing by this to the great victory the Lord won by trampling the devil and rising from the dead. Sermon on the Feast of Sts. Peter and Paul, Leaders of the Apostles
Homily Twenty-Eight

Sermon on the Feast of Sts. Peter and Paul, Leaders of the Apostles
Homily Twenty-Eight
St. Gregory Palamas
If, as we have said, we commemorate each of the saints with hymns and appropriate songs of praise, how much more should we celebrate the memory of Peter and Paul, the supreme Leaders of the pre-eminent company of the Apostles? They are the fathers and guides of all Christians: Apostles, martyrs, holy ascetics, priests, hierarchs, pastors and teachers. The Holy Glorious and All-Praised Leaders of the Apostles, Peter and Paul
Sermon of Saint Augustine, Bishop of Hippo
St. Augustine
The Apostle Paul, formerly Saul, was changed from a robbing wolf into a meek lamb. Formerly he was an enemy of the Church, then is manifest as an Apostle. Formerly he stalked it, then preached it. The Chief Apostles. Three Lessons from two Apostles
Archpriest Andrei Tkachev
What do the differences between the two apostles, celebrated on the same, day tell us? They tell us that in the Church, everyone is different. And this difference is a true blessing, if there is oneness of faith and a unity of love. If for dictators “no one is irreplaceable,” then for God all are unique and all irreplaceable. The main thing is that there be common faith.
Comments
×