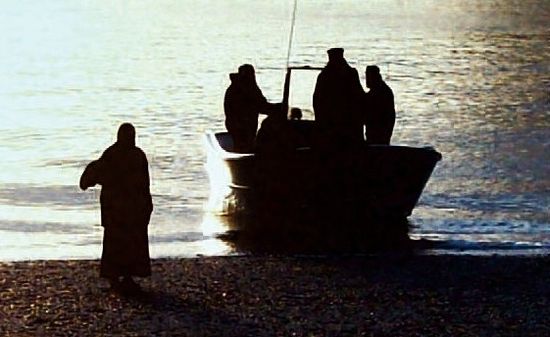 The following excerpt is from the book Atlas of American Orthodox Christian Monasteries, by Alexei Krindatch and is now available through Holy Cross Bookstore.

Upon disembarking in Monk’s Lagoon on Spruce Island after a rough forty-minute boat ride from Kodiak Island, one is immersed in the sounds of myriads of birds that nest on the island from May to September. But there is absolutely no “worldly noise” here: only rugged cliffs, dense spruce forest, bright green moss covering everything, salmon jumping in the lagoon’s waters, and the occasional fox and deer roaming the black-sand beach. It could be said that this place is the cradle of Orthodox monasticism in America. Indeed, St. Herman of Alaska, the member of the original Russian missionary team from Valaam Monastery and America’s first canonized Orthodox saint,[1] had lived here for more than twenty years, until his death in 1836. Today two monastic communities—St. Michael Skete for men and St. Nilus Skete for women (Serbian Orthodox Church in the USA) —live in close proximity to St. Herman’s hermitage and strive to follow St. Herman’s example of prayer, simplicity, and living off the land and sea

Monk’s Lagoon lies on the eastern edge of Spruce Island. This is a primary destination for pilgrims from around the world who come to visit the site of the home and grave of St. Herman, the Wonderworker of Alaska.

A footpath at the south end of the beach leads to the Meeting of the Lord Chapel. Fr. Herman’s favorite feast was the Meeting of the Lord, and it was to this event that he chose to dedicate his chapel. Time and nature have left nothing of the original building, but on the site of the first chapel is a small church, modeled after the original drawings. The chapel’s walls are covered with beautiful frescoes depicting the life of St. Herman. At the opposite end of the beach, another footpath leads deep into the woods. On this trail Fr. Herman would walk from the beach to his cell in the moss-laden emerald forest. The Kaluga Icon of the Mother of God Chapel indicates the place where the saint’s cell was. The icon to which this chapel is dedicated was painted by monks in the monastic republic of Athos in Greece. The Virgin Mary is depicted here reading the prophecy of Isaiah: “Behold, a virgin shall conceive, and bear a Son, and shall call His name Immanuel” (Is. 7:14). The path continues to the St. Herman’s spring—the source of drinking water for Fr. Herman and the place where he kept a small garden. After his death a number of miraculous healings were reported by those who drank the water of this spring. Many pilgrims often take some water back home as a blessing from St. Herman. Walking deeper in the forest, one comes to the Sts. Sergius and Herman of Valaam Chapel. Built in 1894 (to commemorate the centennial of the arrival of Valaam monastic mission), it is erected over the grave of St. Herman. This chapel is home to several notable icons: the icon of Sts. Sergius and Herman of Valaam (painted on canvas and brought from Valaam in Russia); the seventeenth-century icon of the Mother of God (also known as the “Spruce Island Icon of the Mother of God”) that existed from St. Herman’s time; the icon of Christ Enthroned; and the icon of the Mother of God, “Abbess of Mount Athos,” that was painted by monastics on Mount Athos.[2]

Beneath the chapel is the former grave of St. Herman. In 1935 the foundation of the chapel was restored, and the relics of St. Herman were unearthed and placed in a new coffin in the church. In 1970, after the canonization of St. Herman, the relics were transferred to the Holy Resurrection Church on Kodiak Island. Nevertheless, the pilgrims still crawl to the saint’s original grave beneath the chapel to pray there and to ask for direction and help in their lives.

The main, official pilgrimage to St. Herman’s hermitage in Monk’s Lagoon is held each year around August 9, the date of his canonization, but hundreds of visitors also come to this place individually throughout the year (provided that weather permits crossing the strait between Kodiak and Spruce Islands). Many of them combine the pilgrimage to St. Herman’s sites with the visits (and possible overnight stays) to St. Michael and St. Nilus Sketes.

The St. Michael Skete for men was founded in 1983, thus reestablishing the tradition of permanent monastic presence on Spruce Island. It takes about an hour and a half of hiking (approximately four miles) from Monk’s Lagoon to reach St. Michael Skete. Alternatively, one can arrive by boat at Sunny Cove on the southern shore of the Spruce Island and follow a short but steep path to the skete. The skete’s main building (with chapel, trapeza, and cells for monks and guests) is situated high on the slope, offering a magnificent view of the sea and surrounding islands and islets. One of the inspirations for this building was the Holy Monastery of Simonos Petras on Mount Athos. The skete and its Russian-style onion-shaped dome can be easily seen by travelers aboard ferries and private boats en route to Kodiak. A terraced vegetable garden extends from the skete down the slope.

To reach St. Nilus Skete[3] for women, one needs to take a short boat ride of approximately half a mile, from Sunny Cove on Spruce Island to the neighboring tiny islet of St. Nilus. However, “short” does not always mean “easy.” Stormy weather can make the narrow strait between Spruce and St. Nilus Islands impassable for days. Similarly, when bad weather arrives, both monastic communities are completely cut off from the main town of Kodiak on Kodiak Island.

The St. Michael and St. Nilus monastic communities live a true subsistence life, which involves a lot of harsh physical work. Both communities rely on each other’s help and support. The monks go fishing for salmon, grey cod, and halibut, whereas the nuns smoke and can the fish brought by the monks. To survive the long Alaskan winters, the monks help nuns to collect and chop firewood (the sole source of heating in both sketes), while the nuns maintain a greenhouse, growing potatoes, beets, kale, cabbage, and turnips. In the summer months both monks and nuns collect mushrooms and wild berries (especially salmonberries) and make various preserves for the wintertime. The monks help the nuns with getting their mail from the post office in the small village of Ouzinkie on Spruce Island and with transportation to Kodiak Island when necessary. Both sketes are “off the grid” (although solar panels provide a limited amount of electric power). Neither skete has indoor plumbing.

Yet, the lives of monks and nuns here are not simply about physical survival; they are first of all about constant inner prayer and maintenance of the full daily (in the case of the nuns, even nightly) cycle of worship services. The natural surroundings can make this challenging. For example, in order to come to the chapel from their cells, the nuns have to hike in the forest along narrow footpaths, which can be dangerously icy in the wintertime, especially when they gather for their middle-of-the-night services.

With St. Nilus as their patron, the nuns seek to emulate the monastic ideals of poverty, asceticism, and interior prayer. Mother Nina, abbess of St. Nilus Skete, describes the life of her community as follows: “We are strong in our communal life, but there is a lot of space for solitude. The greatest thing that we have to offer is actually silence and solitude. We love it here, because there is absolutely no interference from the outside world: the whole island belongs to the skete.” When asked if there were anything special about liturgical services at the skete, Mother Nina replied, “As a sisterhood, we came to the Orthodox faith through the Russian liturgical tradition, but now we are part of the Serbian Church yet maintain close relations with various US Greek Orthodox monasteries. Accordingly, our services are in English, but the prayer rule is close to Greek tradition, while in our singing we combine the Russian and Byzantine styles.”

Whereas silence and solitude are at the very heart of the St. Nilus monastic community, the sisters are also known for their hospitality. With love and warmth, they receive day-guests on their secluded island. For women pilgrims, the nuns also offer overnight accommodations in a one-room log cabin with windows facing soaring ocean waves (the cabin can lodge up to three persons at a time). Pilgrims to St. Nilus Skete are encouraged to help the sisters in their daily chores. As Mother Nina says, “We love our pilgrims very much, but we have a lot of work to do. This is a very busy community: ‘boredom’ is not a word in our vocabulary.”

[1] St. Herman of Alaska was an Orthodox Christian monk who first lived in Valaam Monastery in Northern Russia. In 1794, along with nine other monks, he was sent to Alaska to evangelize the natives there. In time he would become the sole survivor of the original mission. Throughout his long life (1751–1836), he cared for the natives of the Kodiak area, nursing them in their illnesses, educating them, and defending them from the abuse of the Russian fur traders. Sometime after 1811 he settled on Spruce Island and established an orphanage for native children. He was canonized as a saint by the Orthodox Church in America and the Russian Orthodox Church Abroad in 1970. For more on his life and the history of Russian monastic mission to Alaska, see the chapter on the history of Orthodox monasticism in America.

[2] The Sts. Sergius and Herman Icon and the Spruce Island Mother of God are now kept in the Holy Resurrection Church in Kodiak.

[3] It is named after the fifteenth-century Russian ascetic St. Nilus of Sora. Known for his extreme simplicity, St. Nilus emphasized the inner life of the monastic: spiritual warfare, interior vigilance, and the practice of the constant saying of the Jesus Prayer (“Lord Jesus Christ, Son of God, have mercy on me, a sinner”). Chris Thompson: The old Alaska traditions surrounding Orthodox Christmas
The Orthodox Church in America counts nearly 90 churches across Alaska, and congregations here, and in Canada and 14 other countries, celebrate Christmas on Jan. 7, a practice harkening back to the church’s beginnings. The church in these regions follows a modified Julian calendar.