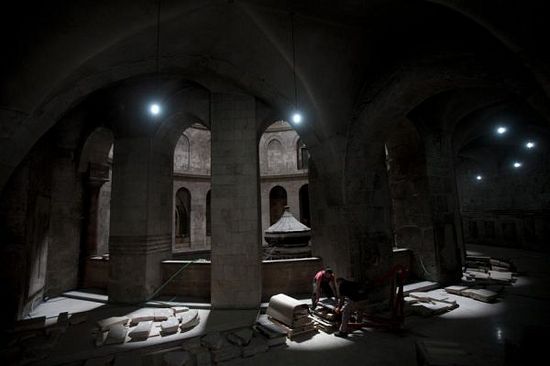 The first thing that surprised the workers was the “sweet aroma” they smelled as they drew near to the tomb. As reported by the Catholic Culture agency, the smell is reminiscent of the floral smell which is often spoken about in ancient sources describing the appearances of saints, including the Most Holy Theotokos.

The workers also reported that some electronic devices lying around the tomb began to fail inexplicably. Some of them turned out to be completely broken. A possible explanation is powerful electromagnetic radiation.

Restoration work is now underway on the Aedicule. In particular, the restorers are cleaning the facing side of the rock on which the body of Jesus Christ was laid. On October 26 archaeologists removed the slab from the Holy Sepulchre (for the first time in 450 years). Beneath it they found another marble slab with a cross. Historians believe it was made during the Crusades.

The funeral bed itself turned out to be completely undamaged, although the walls of the cave in which it was located were destroyed together with the original building of the Church of the Holy Sepulchre in the eleventh century. “It’s absolutely amazing. My knees are shaking, because I didn’t expect this… We can’t say with absolutely certainty at first glance that there is clear evidence that the tomb wasn’t damaged this whole time. After all, scientists and historians have been working on these questions for many decades,” said archaeologist Frederick Hibert.

The tomb of the Lord is hewn from a natural rock tomb from the Second Temple period, in which is a stone funerary bed (6.6 ft. x 2.6 ft., 2 ft. from the ground). The present space, as the previous cave which was destroyed in 1009, is called the Holy Sepulchre. This space, arranged as an aedicule, symbolizes the cave in which the Body of Christ was buried. To this day, only the bed, part of the walls of the cave and part of the entrance have been preserved. By the middle of the sixteenth century the bed was seriously damaged by pilgrims trying to break off particles of the shrine. In 1555 the bed was covered with a white marble slab to prevent such attempts. Workers will soon enter the tomb of Jesus — and repair the ‘Holy Stone’ with titanium bolts
And at the heart of the heart of the edifice, in the center of the Church of the Holy Sepulchre in the Old City of Jerusalem, they will lift the slab where millions of pilgrims have knelt and prayed, where the salt of tears and the wet of sweat have smoothed and worried the hardest stone. Tomb of Jesus set for restoration work after Easter

Tomb of Jesus set for restoration work after Easter
Jerusalem’s Church of the Holy Sepulcher is built on the site where Christians believe Jesus was crucified, buried and resurrected
Comments

Linda Fowler3/3/2017 2:34 am
Just looking at these pictures I smelled the odor of flowers. Viva Christo Rey.

damjan3/2/2017 7:18 am
It is a fact that most Saints' tombs when opened emitted a sweet smell. The documentation on this phenomena is overwhelming. It is one of the precepts that signify the buried person is a Saint.