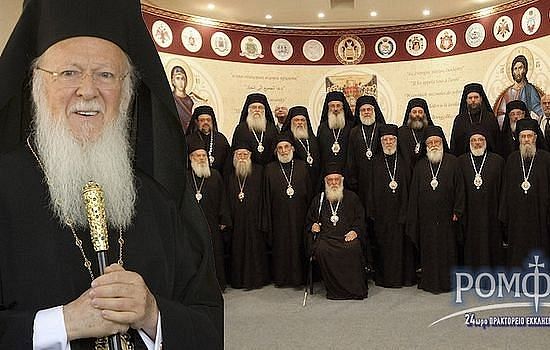 Today the Holy Synod of the Church of Greece will make the final decision on its position as to the Crete Council.

Yesterday Patriarch Bartholomew I of Constantinople called on the Archbishop of Athens to prevent reconsideration of the results of “the Holy and Great” Council and to defend the documents approved at it, reports AgionOros.

Specifically, he stressed that the decisions of “the Holy Council” “demonstrated the unity of the Orthodox Church which follows from Her catholicity.”

The Ecumenical Patriarch called on the archbishop of Athens “to influence” those bishops who disagree with the decisions made at the Crete meeting (among them he particularly mentioned Metropolitan Seraphim of Piraeus and Metropolitan Ambrose of Kalavryta).

According to Romfea.gr, in his message the patriarch warned that the Ecumenical Patriarchate would break off all contacts with these individuals.

Earlier Metropolitan Seraphim of Piraeus sent an open message to the archbishop of Athens, expressing his indignation at the way the delegation of the Church of Greece conducted itself at Crete, not defending to the end the position of the Holy Synod which insisted on making a series of amendments to the conciliar documents.

Rdr Andreas Moran11/23/2016 5:07 pm
A wholly unwarranted and perhaps unprecedented interference by one Local Church in the affairs of another.

Anthony11/22/2016 10:07 pm
This made me laugh. Bart just doesn't geddit. Not a chance any of the Hierarchs who refused to sign are gonna change their minds. They're genuine believers. Try take on Met. Seraphim - we'll see who wins that battle.

Gerrit Kallistos Blydorp11/22/2016 9:47 pm
Heavy handed pressure by Constantinople. A desperate power play, to "legitimize" heresies, which is not edifying. I hope and pray the Church of Greece will remain strong, vigilant and faithful to the full Orthodox truth in all aspects.