Now is not the time to speak of restoring monarchy—Bp. Tikhon (Shevkunov) 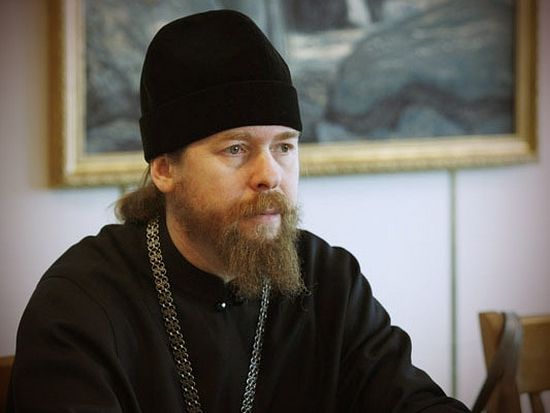 Head of the Synodal Department for External Church Relations Metropolitan Hilarion (Alfeyev) recently spoke of the many advantages of monarchy over elected forms of government, and his belief that the Russian Orthodox Church would take part in any discussions on the matter. For his part, Bishop Tikhon (Shevkunov), head of the Patriarchal Cultural Council and abbot of Moscow’s Sretensky Monastery, says he believes this is not the right time to have such discussions on the restoration of the monarchy.

“Within our Church there are people, there are groups of people who advocate for the restoration of monarchy, and I think that if our society will ever mature to discuss this issue, the Church will take a very active part in this discussion,” Met. Hilarion said on the television program “Church and World.” His statement came in reflection upon recent statements from Catholicos-Patiarch Ilia II of Georgia about the possibility of restoring a constitutional monarchy to Georgia, reports Interfax-Religion.

In his opinion, calls for the restoration of the monarchy in contemporary Russia are “completely pointless,” and now is not the time for such a discussion said Bp. Tikhon during an open lecture at the Russian State Library of Foreign Literature, reports RIA-Novosti.

2017 marks the centenary of the abdication of Tsar Nicholas II from the throne and the elimination of the monarchical form of government. There are periodic discussions about the feasibility of the restoration of the monarchy in the country, especially among the Orthodox. Sretensky Monastery’s new Cathedral of the Resurrection of Christ and the New Martyrs and Confessors of the Russian Church was finished and consecrated timed to the centenary of the tsar’s abdication and the bloody Russian revolution.

“Perhaps we perceive that this is a special path for Russia, a special time, when Russia could come into its own in a special way, but really, to talk about it now, it seems to me, is completely pointless. Some think we need to mature, some think we’re not ready, and some think the time is irretrievably gone—we all have our own speculation,” Bp. Tikhon said in response to questions from the audience.

He noted that it is easy to idealize monarchy today, but that “there are pros, there are cons,” although adding, “But monarchy is to some degree natural for a Church consciousness.”

However, he also noted that the Church takes a neutral position with respect to any politicians elected by the people. “The Church is loyal to any authority until they begin to call for actions at variance with Christian morality,” the metropolitan of Volokolamsk said. Echoing these words, Bp. Tikhon stated that he was himself a staunch monarchist in the early 1990s, but eventually realized that “the Orthodox Church can live in any state.”

“But monarchy—such a monarchy of which we sometimes dream—really must be deserved. I don’t know how much this can happen,” Bp. Tikhon concluded. Majority of Russians against revival of monarchy
Two-thirds of Russians oppose the revival of Russian monarchy, believing that its historical time has passed, according to recent research from the All-Russian Center for the Study of Public Opinion.

In This Great Service: A Theological and Political Defence of Monarchy
Ryan Hunter
Is democracy “automatically” the best form of government? Where did the Christian form of monarchy come from? Ryan Hunter explores these questions and more on his blog.
Comments

Dimitra7/6/2017 11:12 am
Russian startsy also spoke about one last Tsar who would be pious, with an iron will, who would oppose the antichrist.

And St. John of Shanghai spoke about this in his homily-lecture, “The Sin of Regicide.” His holy words are still relevant for us now:

Tsar-Martyr Nicholas II and his much-suffering family have entered now into the assembly of these passion-bearers. This greatest of crimes committed against Him must be atoned for by fervent honor for Him and the glorification of His spiritual feat.

Rus’ must bow down before its humiliated, slandered, and martyred tsar, as once those of Kiev bowed before the holy Prince Igor martyred by them, and those of Vladimir and Suzdal before ..

Anthony7/5/2017 6:03 pm
He's right. There was a quite recent poll which showed most Russkies surveyed did not want a restoration of the monarchy. Whether or not that poll is really indicative of the country's attitude as a whole is another issue altogether. But from what I hear, the Russkies haven't reached full repentance in any event so there may be some truth to that.

What we Hellenes do know for sure is that Ayios Ioannis Vatatzis, the sleeping king will awaken (or has in fact awakened and walks around Constantinople as a Fool-for-Christ), and will ascend to the restored Byzantine throne following the restoration of Constantinople to our nation. He will reign over us for 33 years just before the advent of the antichrist. Geronda Efraim Philotheitis has spoken about him.
×