Met. Ignatios of Pentapolis reposes in the Lord 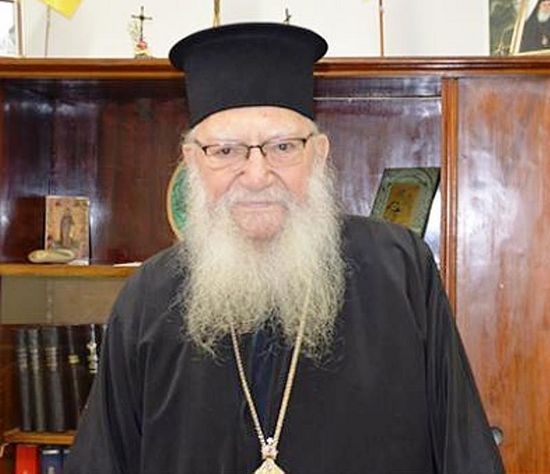 His Eminence Metropolitan Ignatios of Pentapolis reposed in the Lord yesterday, the Patriarchate of Alexandria reports. Note that the retired hierarch reposed on the day that the Alexandrian Church celebrates the great wonderworker and hierarch St. Nektarios of Pentapolis on the New Calendar.

The late prelate of Pentapolis was born George Mandelides in Edessa in 1930. He graduated from the Theological Academy in Athens in 1952 and was ordained to the diaconate in 1968, followed by the priesthood in 1969. He was elevated to the rank of archimandrite in the same year. He served for 40 years as a preacher, in the Holy Metropolis of Larissa until 1998. He also served as a pastoral assistant to the missionary elder Archimandrite Hariton Pnevmatikakis in the Congo. He was placed in charge of a missionary group in 1997.

He was elected as Metropolitan of Central Africa by the Holy Synod of Patriarchate of Alexandria on March 14, 2003. He retired due to health reasons on March 4, 2010, and was honorably elevated on November 23 to titular Metropolitan of Pentapolis, with the title “the Diocese of St. Nektarios, the Wonderworker, Bishop of Pentapolis.” He continued his missionary service until the day he died.

His Eminence’s funeral will be held tomorrow at the Church of St. Nicholas Pefkakia, with the burial following at the Zographos Cemetery in Athens, Greece. Abbess of Tvorozhkovo Holy Trinity Monastery dies in car accident, two nuns in critical condition
Mother Anna (Tkach), the abbess of the Tvorozhkovo Holy Trinity Monastery in the far western Russian Pskov Province, tragically perished yesterday in a car accident involving a minibus taxi near the village of Podborovye. Two sisters who were traveling with her, Nuns Theodora and Fiona, are in critical condition. Bishop Antoun of Antiochian Church reposes in the Lord Met. Irinei of Nezhin and Priluki reposes in the Lord Archbishop Simon of Łódź and Poznań reposes in the Lord Fr. Mihai Negrea, protector of orphans, departs to the Lord

Fr. Mihai Negrea, protector of orphans, departs to the Lord
Fr. Mihai reposed in the Lord on January 25. He is known as a man who devoted himself entirely to others, and especially to orphans, the sick, and the poor.
Comments

Justin Mugisa 11/10/2017 11:15 pm
My your soul rest in peace, Congo -Kinshasa is crying you our spiritual Father, Thanks for all you did in our country Congo and All African's Churchs eternal memory. It's JUstin Orthodox Christian from Bunia parish, Est of Congo-DRC...
×