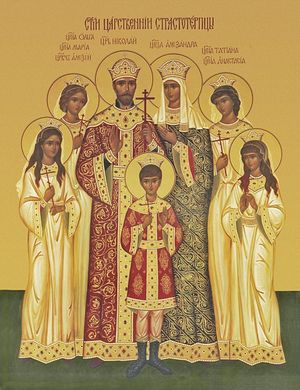 Photo: tsar-mucheniki.cerkov.ru
In addition to their holy deaths, the Russian Orthodox Church canonized Tsar Nicholas II and his family as saints because they placed moral ideals above the royal crown, His Holiness Pat. Kirill stated at the opening of the 26th annual Nativity Readings yesterday, reports RIA-Novosti.

The theme of this year’s Readings, held inside the Moscow Kremlin, is “Moral Values and the Future of Mankind.” The Nativity Readings are a Church-public forum held annually in the sphere of education, culture, social service, and spiritual-moral enlightenment.

“As if a reward for the love that reigned in this family, they remained inseparable in death. Christian moral ideals were for them higher than the royal crown. They did not consider belonging to a royal or boyar family as a sign of nobility, but purity of thought and purity of soul,” the patriarch told packed crowd of more than 6,000.

The Russian primate also quoted lines written by Grand Duchess Olga Nikolaeva after the tsar had given up the throne and the family was in danger, which give a clear picture of who the Royal Family was: “Father asked me to convey to everyone who remains loyal to him, and to those upon whom they might have some influence, his earnest request that they not take revenge for his sake, because my father has already forgiven all and prays for all, and that they not take revenge for their own sakes either, but remember always that the evil that is in this world may get stronger, but evil will never be defeated by evil. Only love can defeat evil.” Tsar Nicholas II and St. Tikhon of Moscow make Forbes’ list of most influential Russians of 20th century
Tsar-Martyr Nicholas II, and Patriarchs St. Tikhon of Moscow, Sergius (Stragorodsky), and Alexey II, and Metropolitan Anthony of Sourozh have been included in Forbes magazine’s list of the 100 most influential Russians of the 20th century.
Comments
×