Apostle Aristobulus of the Seventy the Bishop of Britain 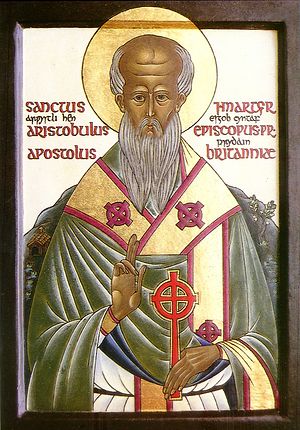 Saint Paul made Aristobulus a bishop and sent him to preach the Gospel in Britain, where he converted many to Christ. He endured the torments and malice of the pagans, and eventually baptized them.

Saint Aristobulus died in Britain among the people he had evangelized. His memory is celebrated on October 31 and also on the Synaxis of the Seventy Apostles January 4.

From Cyprus and one of the Seventy, he [the Apostle Aristobulus] was the brother of St Barnabas and is mentioned in Romans 16, 10. Some say that he was the father-in-law of the Apostle Paul. In any case, the Eastern Lives of the Saints quite specifically affirm that he was sent by the Apostle Paul to preach in Britain, inhabited by “a very warlike and fierce race,” in particular in the Isles of Scilly and Cornwall. Here he toiled much and suffered from cruel and unbelieving people. He was beaten, dragged as a criminal along streets and suffered misfortune, malice and mockery. Finally, local people accepted from him the Light of Christ. He taught them the Faith, baptised them, built churches and ordained priests and deacons, reposing in Britain. Some sources add that he was also martyred in Britain, but we do not need to believe the Cypriot folklore that he was eaten by cannibals. Accounts of these events can be found in the writings of Haleca, Bishop of Augusta, and Dorotheus of Tyre.

As regards folk memory, the British Achau, or Genealogies of the Saints, say that St Aristobulus was known as Arwystli Hen (the Elder) and that he came to Britain with others, Jewish converts, and also his own son, called ‘Manaw’. An area on the River Severn in what was Montgomeryshire in Wales used to be called ‘Arwystli’, for this was said to be the site of his martyrdom. St Aristobulus is feasted on 15/28 March in the Greek Churches and 16/29 March in the other Orthodox Churches. Holy Hierarch Felix, Apostle of East Anglia
Commemorated: March 8/21
Dmitry Lapa
This early Orthodox saint, sometimes known as “St. Felix the Burgundian”, has long been venerated as the enlightener of East Anglia, one of the seven ancient kingdoms that formed most of what is now England. Saint Alban of Verulamium, Protomartyr of Britain
Commemorated June 22/July 5
Dmitry Lapa
We firmly believe that the very name of St. Alban predetermined that he became one of the symbols and chief patrons of this country. Let us hope and pray that through his intercession the ancient faith and spirituality will be restored in this ancient Orthodox Christian land. Holy Hierarch Chad of Lichfield, Apostle of Mercia, Wonderworker
Commemorated: March 2/15
Dmitry Lapa
Pious English people, especially ordinary folk, have deeply loved and venerated this saint for more than 1300 years as one of their protectors. His veneration is similar to that of Sts. Aidan and Cuthbert of Lindisfarne and Swithin of Winchester; he lived absolutely in the same spirit with them. Holy Hierarch Aidan of Lindisfarne, Apostle of Northumbria and Wonderworker
Commemorated August 31/September 13
Dmitry Lapa
The first missionary who came from Iona was Corman, but he was very stern with the Angles and could not speak their language, so he soon had to go back. On his return to Iona, Corman told the brethren: “What a hopeless task it is to preach to these savage and stubborn Angles!” One of the monks, named Aidan, answered him gently: “Brother, you were probably too strict with these illiterate people.” So it was decided to send Aidan to Northumbria. On the Feast of St. Edmund, King and Martyr
Commemorated November 20/December 3

On the Feast of St. Edmund, King and Martyr
Commemorated November 20/December 3
Indeed, spiritual progress can only be made through the Cross, through sacrifice. Wherever there is no sacrifice, there the Church becomes a mere institution, a ritual, an empty form. But where there is sacrifice, martyrdom, the Cross, there is spiritual life.

Editor3/30/2018 10:28 am
Justin: note that the author says, "Some say that he was the father-in-law..." There is nothing in New Testament that would argue for or against St. Paul having been married, only that when he was writing his epistles he did not have a wife. That does not mean that he never had a wife. She might have died, or they might have voluntarily separated. Although we know that the apostle Paul was celibate, the only disciple of Christ whom the holy fathers repeatedly call a "virgin" is St. John the Theologian.