In Praise of the Mother of God

The fortieth day after death is a meaningful day for the soul of the departed. How fitting that fortieth day after the repose of Elder Kirill (Pavlov) should fall on the eve of the Saturday of the Laudation of the Mother of God. Fr. Kirill had such great love for the Mother of God that one of the most popular books published of his sermons was entitled, Laudation of the Mother of God—an anthology of homilies in her praise, given on various feast days dedicated to her. The following homily translated from that book was delivered at an Akathist service. 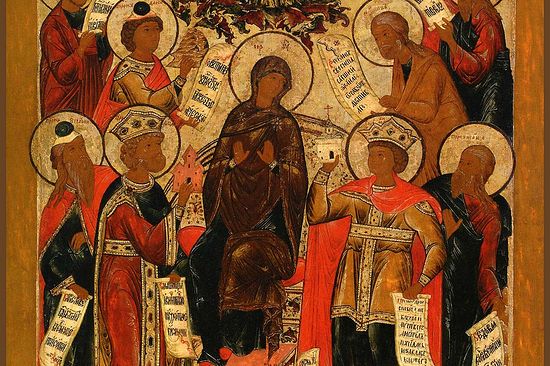 Let us come, O ye people, to this quiet and good harbor, our speedy Helper, to the ready and warm salvation, the protection of the Virgin… (From the Kontakon to the Kazan icon of the Mother of God.)

Dear brothers and sisters, once a certain woman, elated by the wondrous teaching of Christ the Savior, lifted up her voice and exclaimed: Blessed is the womb that bare thee, and the paps which thou hast sucked (Lk. 11:27). In these few words are expressed the grandeur and glory of the Mother of God with which the whole world visible and invisible has praised her for her love and mercy toward suffering mankind.

The believing Christian heart always rejoices when it recalls this love and mercy of the Most Pure Theotokos, but this recollection is especially joyful to us, the inhabitants and visitors of this holy monastery, which was vouchsafed a wondrous visitation of the Mother of God, and over which she promised to ever spread her divine protection. The Orthodox Church of Christ honors above all created beings both earthly and heavenly, as more honorable than the Cherubim and more glorious beyond compare than the Seraphim, the Most Holy, Most Pure, Most Blessed, Glorious Queen, our Theotokos and Ever Virgin Mary. According to the Church’s teaching, she is the only hope of sinners, the salvation of all who come to her from troubles and afflictions, the source of mercy and an invincible wall, fervent Mediator before the Creator, the hope and intercession of the faithful, Joy of all who sorrow and Intercessor for the offended. She unsleepingly intercedes in prayer for us before God. Before her gaze everyday, every night, every hour and every moment appear a countless multitude of people, some of whom are compassed about by myriad armies of invisible enemies seeking their destruction; others are burdened with overwhelming sorrows and afflictions; and yet others are suffering from onerous infirmities and sicknesses—and the Most Blessed Mother of God sees them all.

Out of her limitless love for the human race, she takes to heart every tear, every trouble, and every sigh, and unceasingly prays to her divine Son and Lord that He be merciful towards human iniquity and deliver His servants from every evil. St. Dimitry of Rostov writes, “As the Mediator between God and our sins, the Most Holy Theotokos does not allow our sins to rise up very close before God and with the voice of her prayer for us she deflects the voice of our sins, which cry out against us to God.” Therefore there is not a single true Christian who with total trust and love does not raise up his personal and communal prayers to the Mother of God and feel her grace-filled help.

Dear brothers and sisters, the word of God informs us that there is a world of evil spirits who ceaselessly and vigilantly work to destroy human souls. The holy apostle Peter says to Christians: Be sober, be vigilant; because your adversary the devil, as a roaring lion, walketh about, seeking whom he may devour (1 Pet. 5:8). Therefore, where can a poor and weak human hide or find refuge from the cunning of these adversaries? The Christian finds refuge from them only under the protection of the Mother of God. In the Akathist we have just heard these words: Rejoice wound of demons bewailed afar (Akathist to the Mother of God, Ikos 2), Rejoice thou who didst banish the inhuman tyrant (Ibid., Ikos 4), Rejoice downfall of demons (Ibid., Ikos 6). These words assure us that the Mother of God chases the demons away from us, and her name alone sets the evil spirits to flight. The holy Church of Christ knows many cases when the Most Blessed Mother of God has delivered people from invisible enemies. In the Prologue there is a story about one man named Codratus. He was demonically possessed, and the demons once drove him through the desert for ten weeks. He was perishing from hunger and already expecting death to come. But in a moment of illumination of mind he turned with prayer to the Mother of God, and the Most Pure Virgin herself appeared to him in the desert, expelled the demons from him, strengthened him, and showed him the way to his parents’ home—and he was made perfectly healthy. There are many other similar examples.

But the Most Pure Theotokos delivers not only from invisible enemies; she delivers pious people also from visible enemies. In Alexandria there lived a reverent, merciful, and Christ-loving man, who had a wife who was of humble nature and a faster, and a six-year-old daughter. One day he was preparing to go on his trade business from Alexandria to Constantinople. When he was setting out for the journey his wife asked him, “To whom do you entrust us, our lord, while you are away?” “To our Queen the Theotokos!” he replied. Leaving one slave at home, he departed. The enemy of all goodness, the devil, suggested the thought to this slave of murdering the wife and daughter of his master, plundering his possessions and escaping with the stolen property. With this intention he took a knife and went to the upper chamber where the mother and daughter were. But no sooner had he approached the door of the chamber where they were occupied in handicrafts than he was stricken with blindness, and unable to see anything he could neither move forward nor retreat. Shocked and unable to find the exit, he began shouting and calling for his mistress so that she would come out and help him. Not suspecting any evil intentions she only answered him, “You come in to us.” Then he called to her daughter, but the mother would not let her daughter go to him. Finally seeing that his plans were foiled, he stabbed himself in a fit of rage and fell to the ground with a horrible cry. The neighbors hearing the cry ran over, and the mistress came out, and still alive, the slave told them about his evil scheme and the misfortune that had happened to him. Everyone gathered there praised God and His Most Pure Mother, Who had saved the lives of Their pious servants.

This example teaches us also, my dear ones, that we should also run for help and intercession to the Mother of God. There was and still is a pious custom among Christians of entrusting their close ones and children to the defense and protection of the Most Holy Theotokos when seeing them off on a far journey, or when they themselves have to separate from them out of necessity. Dear brothers and sisters, our earthly life is filled with sorrows and sadness. There is a reason why it is so often called the “vale of tears and mourning.” Man is born crying and he departs for the next world with many sighs and sufferings. Thus, no one can avoid sorrows and tears in this life; man has many more troubles and misfortunes than joys. Everyone knows from experiences how life’s woes oppress the soul from every side, the heart languishes from grief and sorrows, and every now and then tears involuntarily flow from our eyes. It can be hard for a person to bear misfortunes, and one can even fall into despondency, the feeling of sadness overtaking him. But my friends, the most important thing is not to despair. Have courage! When you are encompassed by a cloud of sorrows so that it seems there is no way out of your predicament, then remember that you have a Mother in the heavens, the Heavenly Queen, who sees you, who hears and knows all the movements of your soul. Call upon her with faith, and she will come to you straightway and deliver you from troubles and afflictions.

Let us pray to her, so that she would hear us and in this hour deliver us from every sorrow and misfortune, purify us from every vice and sin, and make us worthy of joy in the eternal Kingdom of her Son; that we would ever call out to her with love: Rejoice, O all-gracious one who is quick to hear, who works our forgiveness unto good! Amen.

Laudation of the Mother of God ‘Hail, passage through the gates of Paradise…’
Sotirios Sarvanis

‘Hail, passage through the gates of Paradise…’
Sotirios Sarvanis
From all of this, we may understand that it is no accident that the Salutations have been placed within Great Lent. What we will experience shortly is the most tremendous experience, and our soul must be pure if we are to live through the Holy Passion and the splendid Resurrection of Our Lord. This is why we ask Our Lady to support us at this time with her maternal affection and love, to pray for us to Our Father and for us to complete both this struggle which we are undertaking this Lent, peacefully and sinlessly, and also every other struggle for our salvation, so that we may enjoy the Kingdom of God. The Laudation of the Holy Theotokos

The Laudation of the Holy Theotokos
As we near the end of the Great Lent, its most intensive moment - the Passion of our Lord, which accomplished the salvation of mankind through Christ’s glorious Resurrection, - the Church reminds us that it is most fitting at this point to glorify the Holy Virgin. 5th Saturday of Great Lent: of the Akathist to the Theotokos

5th Saturday of Great Lent: of the Akathist to the Theotokos
In 625, when the emperor Heraclius was fighting the Persians, the Khan sent forces to attack Constantinople by land and by sea. Patriarch Sergius urged the people not to lose heart, but to trust in God.
Comments
×