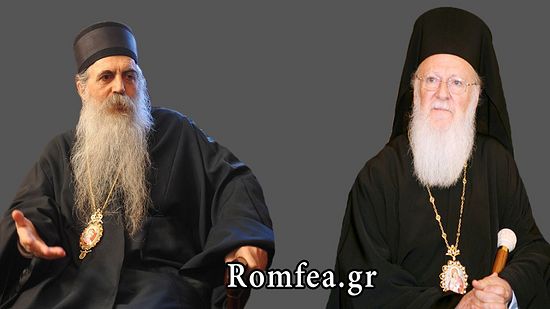 Metropolitan Irinej of Bačka of the Serbian Orthodox Church has expressed his dismay and disappointment over meetings between representatives of the schismatic “Kiev Patriarchate” and Ecumenical Patriarch Bartholomew at the Phanar in Constantinople, Romfea reports.

In a meeting with Archbishop Luke of Zaporozhye and Melitopol, Met. Irinej stated that he had told the Ecumenical Patriarch in a personal conversation that were he to support “Patriarch” Philaret of the “Kiev Patriarchate,” it would lead the Church into a new schism, this time not between East and West, but within the East itself.

“Only those powers that have nothing in common with Christianity are interested in this schism,” the bishop of Bačka has also said.

Met. Hilarion (Alfeyev) of the Moscow Patriarchate expressed the same concerns in March in an interview. “We fully respect the Ecumenical Patriarch, and do not consider it necessary to comment on what political actors he meets with. But when schismatic pseudo-hierarchs appear at the Phanar, it cannot but grieve us,” the metropolitan said.

The Serbian prelate also stressed that he spoke honestly with the patriarch, expressing his concern that, besides schismatic clerics, similar talks have been conducted at the patriarchate with political and state actors as well, who are not Orthodox. “Of course, they are pursuing state interests, as is the case in Montenegro. The Church is transformed into a political tool to serve government interests rather than its real purpose,” Met. Irinej lamented.

“My view is that the Ecumenical Patriarch will not in the end compromise with the schismatics,” he added, echoing Met. Hilarion, who said, “Many times we have heard from the mouth of the Ecumenical Patriarch his solid assurance that he considers the only canonical Church in Ukraine to be the Ukrainian Orthodox Church with His Beatitude Metropolitan Onuphry at the head. For us, these assurances of His Holiness Patriarch Bartholomew are the basis on which we build our relationship with the Patriarchate of Constantinople.” Russian Church concerned about Constantinople meeting with Ukrainian schismatics
The head of the Moscow Synodal Department for External Church Relations (DECR) Metropolitan Hilarion of Volokolamsk has expressed concern over the fact that the Patriarchate of Constantinople receives representatives of schismatic Ukrainian church communities. Report of “Kiev Patriarchate” meeting with Constantinople reps called into question
According to media reports, including the Greek source Amen.gr, Met. Emmanuel was not in the Phanar on January 12, but was in fact participating in the Fifth European Orthodox-Catholic Forum in Paris from January 5 to 12. Constantinople metropolitans met with “Kiev Patriarchate” schismatics
Both sides exchanged views on the current state of Orthodoxy in Ukraine during the long meeting, with the “Kiev Patriarchate” representatives stressing their “church’s” official recognition of the decisions of June 2016’s Crete Council assembled by the Ecumenical Patriarchate.
Comments

o Evthymios Bromwich9/26/2018 3:37 pm
I am saddened by this sudden up-surge of dis-satisfaction within our mother church. God pray that Christian sanity return to all concerned. GOD BLESS.

Anthony5/17/2017 8:58 pm
Tragically I think we all need to brace ourselves for the very worst. His All Holiness, the and looks ever more likely to end his life in schism, and outside our Mother the Church. How truly tragic and extraordinarily foolish that a man can sell himself over for thirty cheap pieces of silver, creating heartache and anger as he attempts with much futility to smash apart the ship of salvation through his divisive and heretical behaviour. It's sad, so sad, it's a sad sad situation (and it's getting more and more absurd ... ooooohhh)

George5/17/2017 1:09 pm
We must always pray to God, and wish mercy upon our fellow Human creatures. Only total Orthodox revolution will save this world, otherwise, evil will only gain in strength until Christ's return.
×