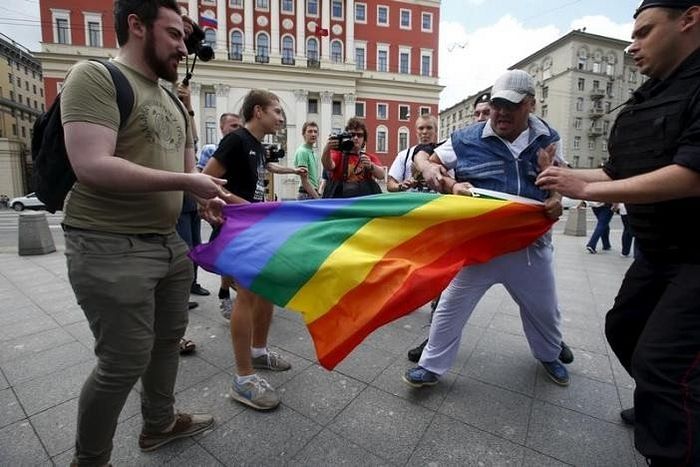 The European Court of Human Rights ordered on Tuesday that the Russian government must pay 49,100 euros ($54,800) to a group of gay activists, reports Interfax-Religion. The court ruled on the case of Nikolai Baev, Alexei Kiselev, and Nikolai Alekseev, proclaiming that Russia’s law against “propaganda of non-traditional sexual relations to minors,” violated the activists’ right to freedom of expression.

The monetary damages are imposed as compensation for material and moral damages, as well as legal costs. Moscow has stated that it will appeal the decision, which it considers unjust. Tuesday's case was originally brought by the Russian gay rights activists after they were fined for holding banners designed to encourage acceptance of homosexuality, between 2009 and 2012, reports Reuters.

The court found violations of Articles 10 (freedom of expression) and 14 (prohibition of discrimination) of the European Convention on Human Rights and Fundamental Freedoms. The Russian Ministry of Justice is not satisfied with the court’s decision, saying it will file an appeal before September 20. “The Ministry of Justice expresses disagreement with the findings of the European court about alleged violations of the Convention, based on the fact that the provisions of a number of regional laws banning the propaganda of nontraditional sexual relations among minors was not contrary to international practice and was aimed solely at the protection of the morals and health of children,” the ministry’s press service said on Tuesday.

The head of the Duma faction “A Just Russia” Sergei Mironov believes the European Court of Human Rights should not include Russia, and that Russia should ignore its decision which deemed discriminatory the law protecting the country’s minors.

“We have our own traditions, we have our own history, including in the solution to this problem. We stand on our own, and any recommendations or evaluations should not enforce that our children be exposed to this or that ideology in this sensitive area,” Mironov stated. He noted that everyone in Russia has the right to live as they want to live, including in the realm of personal relations, but not to promote or impose their way of life.

“The problem of sexual minorities in Russia had been deliberately exaggerated from the outside for political reasons, I believe, without any good basis,” President Putin explained in a 2015 CBS interview.

“I believe we should leave kids in peace,” Putin argued. “We should give them a chance to grow, help them to realize who they are and decide for themselves.” He also noted that homosexuals in Russia have the same civil rights as any citizen, but they may not try to indoctrinate Russian youth. “I don't see any infringement on the rights of gay people here,” he concluded. Gay Iconoclasm: Holding the Line against the Radical LGBT Agenda
Fr. Josiah Trenham
Fr. Josiah Trenham, pastor of St. Andrew Orthodox Church in Riverside, CA, offered a talk at the World Congress of Families X on May 15th 2016, in Tbilisi Georgia with the blessing of His Holiness Catholicos-Patriarch of All Georgia Ilia II, in which he outlined the rise of the LGBT movement, and especially in his homestate of California, and how its beliefs, methods, and aspirations radically contradict the traditional wisdom of the world's philosophies and religions and seriously threatens the future of family and society.
Comments

John6/24/2017 9:37 am
Howcome Russia can be "disciplined" by a European court. They are not members of the EU. They are right in their stance as is Putin.

Artaxerxes6/23/2017 10:26 am
Behold the AUDACITY of these filthy liberal western Europeans. Not only must they promote their sickening filth, they MUST IMPOSE their sickness on others, and REQUIRE CELEBRATING this Satanic ideology.

TOLERATION IS NOT ENOUGH, YOU MUST CELEBRATE HOMOSEXUALS.

Well the Orthodox Church says "NO!" We will not be cowed and we will not be silenced! Russia must immediately protest this, and get China converted to Orthodoxy, and I hope that together they can overthrow this (((liberal world order))).
×