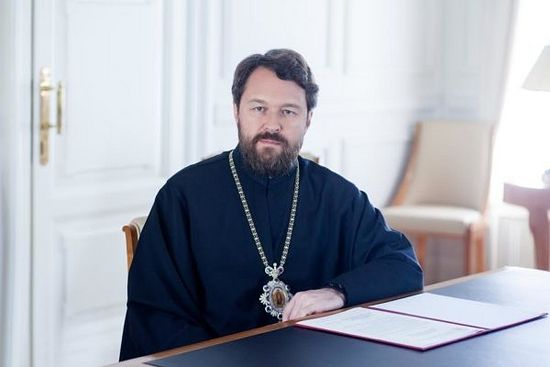 Chairman of the Department for External Church Relations (DECR) Metropolitan Hilarion (Alfeyev) spoke about the Church situation in Ukraine and the raiding activities of the schismatic “Kiev Patriarchate” in a recent interview with the Russian BBC, posted on the site of the DECR.

“We never speak about relations ‘between the two patriarchates,’ because we do not recognize the ‘Ukrainian Patriarchate.’ It is a schismatic structure; it was created by a person who is excommunicated from the Church,” notes the metropolitan. Offering the solution to the problem, the hierarch continued, “We see the path of healing the schism in those involved in the schism returning to the Church.”

“Neither the head of this schismatic group, nor its official representative are looking for dialogue,” Met. Hilarion explained. The schismatic group is more politically-oriented: “They want dialogue with the Ukrainian authorities, using the political situation to gnaw at the canonical Church as much as possible: They seize churches through raids, through violence. One of these bills was directed at legitimizing raiding takeover of churches: It was proposed that the membership of a church of a religious community is defined by the self-identification of its members. When the members of a community aren’t registered anywhere, any group of people can burst into the church and take it over, and say, ‘We are the parishioners, we are the owners of this church, and we are transferring it to another religious confession.’”

His Eminence also spoke of another bill which was recently before the Ukrainian Verkhovna Rada, namely bill No. 4511, “On the special status of religious organizations with headquarters located in states recognized by the Verkhovna Rada of Ukraine as aggressor states,” which would effectively prohibit the Ukrainian Orthodox Church of the Moscow Patriarchate, by giving the government the right to forbid a confession if its representatives cooperate with religious centers in “aggressor states.” The same bill also allows that such religious organizations be able to appoint metropolitans and bishops only in agreement with the governing authorities.”

No specific denominations are mentioned in the bill, but only the Ukrainian Orthodox Church of the Moscow Patriarchate (UOC-MP) meets all the criteria listed. As the metropolitan noted, believers do not support such bills. Thousands protested the bill on the day it was to be considered in the parliament, and the Rada announced it would not discuss the bill that day. The faithful especially oppose any moves that aim at the absorption of the canonical Church into the schismatic structure. “If the structures want to unite, they would do it themselves. But it’s impossible to do so by governmental order, and especially by disciplinary measures,” the archpastor of Volokolamsk explained.

The essence of being Orthodox is following the teachings of Jesus Christ as:

(a) In the dogmatic proclamations of the Seven Ecumenical Councils
(b) Being organized in an ecclesial body in spiritual communion (whether formally or not) with all branches that have remained faithful to the Orthodox Christian way of life in both teaching and practice
(c) In the bishop(s) holding uninterrupted succession. This means that Apostolic succession is always rooted in Apostolic tradition, not a mere independent laying on of hands.

In all due respect, being part of a particular branch or Synod or carrying prestigious patriarchal labels does not make one Orthodox.
×