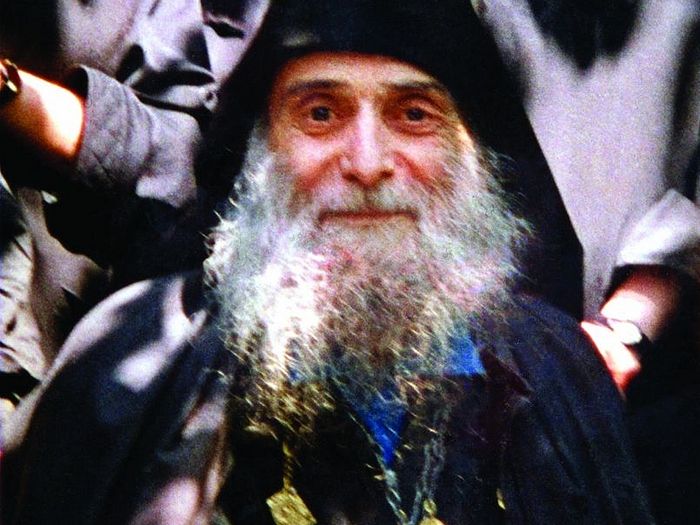 St. Gabriel (Urgebadze)… Everyone who knew Elder Gabriel remembers that he was extraordinarily simple, humble, and loving, and at the same time formidable. When he was angry or rebuked someone, you could feel that the Almighty was speaking through his mouth—such Divine authority and power his words possessed; but when he noticed that someone was repenting, he would embrace him, press him to his chest, and instill hope and love into the heart of his beloved. The “foolish”[1] elder today, in our day, continues to strengthen people in faith, and to infuse love into their hearts invisibly, and sometimes visibly, appearing among believers, regardless of religion, simple people, beginning the thorny path of salvation known as Orthodoxy.

Fr. Gabriel was born on August 26. Honoring his memory, we have chosen a few stories about him, one of which occurred during the elder’s life, the others taking place after his repose. They confirm that Fr. Gabriel’s presence is truly felt today, in our rebellious times.

Fr. Gabriel spent a few days with my family. After our home blessing, we spoke the whole night about various things, and we prayed. The elder said to me, “Nodar, my brother, I have to be at the monastery by 6:00. Can you take me to Mtskheta?” I, of course, agreed. This was the time when they were controlling absolutely everything. We headed for Mtskheta. On the way out of Tbilisi, seven armed men blocked our road and demanded we stop the car. Remember, this was the 1990s.

Despite this, Elder Gabriel told me not to stop, but I was wary, and stopped the car anyways. Fr. Gabriel sat very quietly. I got out of the car to show my documents to these unknown men, but it turns out they wanted not my documents, but my car. I resisted, although I realized that to fight with seven “knights” armed to the teeth was fraught with risk. Then I saw Fr. Gabriel get out of the car and head towards us. Something unusual happened: A huge pillar, glowing in the dark, descended as if from Heaven, followed by a supernaturally tall, beautiful, and unearthly man with a staff and a white beard. He struck his staff on the ground, and his extraordinary voice rang out: “Who has dared to stop us?! How are you not ashamed?!” It was a truly supernatural manifestation that shook everyone. Frightened, the armed men ran off in every direction. One man, frozen in place, started shoving our documents into our hands and asked us to leave more quickly.

We left. Fr. Gabriel looked at me and asked, “Well, what do you say, Nodar? Did we do a good job?”

Leila Sikharulidze, the editor of the Georgian version of the book about St. Gabriel The Elder’s Diadem:

Having finished the work on the book, we were sitting with several of Fr. Gabriel’s spiritual children in his cell. We were joking, and recalling various stories from the life of the fool-for-Christ, and all were smiling involuntarily. I also wanted to tell a joke and I said, “This is the end of the work on the book, and Fr. Gabriel will give me in marriage!” And I was already seventy! And suddenly… Fr. Gabriel winked at me from the photograph! I was stunned and couldn’t utter a word. Nun Paraskeva asked me, “It was the left eye, wasn’t it, Leila?!” It turns out others had noticed it too, and one of those present said, “That’s nothing—sometimes he even flicks us on the forehead!”

“Get the candles out of here!”

Several years ago, my sister and I were vacationing with our relatives. One night, Fr. Gabriel appeared to my sister in a dream. He was standing near the house where we were staying, holding extinguished candles in his hands, and he said, “Get them out of here!” When my sister told us about the dream, we were very surprised, for candles are a symbol of faith. But when we told our neighbor about the dream, she said there had been a woman in that house a few days before, using the candles for fortune telling. It all became clear to us. My sister showed us the place where Fr. Gabriel was standing in the dream, and we saw the ashes from the candles the woman was using for fortune telling. Fr. Gabriel had helped us, and protected us from evil forces.

After Fr. Gabriel’s repose, we feel his spiritual support. One time I was very concerned about my physical condition and I was praying to God to give me back my sight. One night Fr. Gabriel appeared to me in a dream, sternly rebuking me: “Why are you asking for a speedy recovery? Wait, the Lord knows, everything has its time!” When I woke up, I appealed to the priest and asked him to give me a sign, whether this dream was from the Lord or not. After a while, my relative, who was staying with us, told us that when she was cleaning the room, a strange glow suddenly appeared behind her. She turned around and saw that the icon Fr. Gabriel had given me was lying on my bed, although the icon could not of itself have fallen off the wall and wound up on my bed, because the distance from where it hung to my bed was quite large. It was a sign from Fr. Gabriel. It was also amazing that when I described the man who had come to me in a dream, his image exactly coincided with that of Fr. Gabriel. And I had never been able to see Batiushka…

I often want to speak with Fr. Gabriel, to hear his living, gracious words, to be filled and penetrated with that Divine feeling which Elder Gabriel bore—that feeling which we call love!

[1] St. Gabriel at times took upon himself the rare asceticism of foolishness for Christ’s sake in which people feign extreme foolishness and even insanity, in order to preserve and deepen their humility.