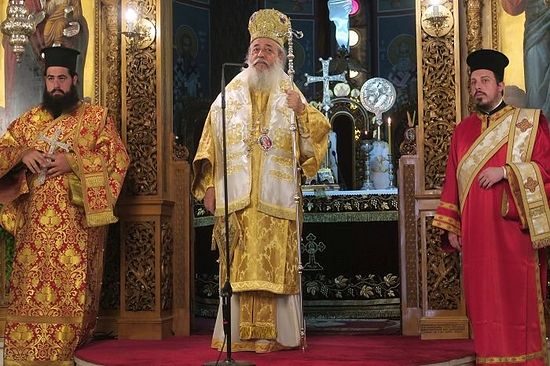 Metropolitan Nicholas of Phthiotis has touched upon the new law on gender reassignment recently adopted by Greek deputies in a recent sermon, pointing to what he believes to be their true end goal, of allowing homosexuals to adopt children, reports AgionOros.

“Do you see how far these Greek Orthodox deputies have sunk? Thankfully not yet all of them,” the hierarch stated. “They have brought blasphemy upon the human body. They voted for a law by which every person at least 15 years old can send a written declaration to change his gender,” he explained.

As reported on Monday, the majority of Greek parliamentary parties have spoken out in favor of the scandalous bill. Only members of the Communist party and the “Golden Dawn” movement have wholly voted against the bill.

The metropolitan went on to criticize the new law in the harshest of terms: “It is madness for any reasonable person, and a satanic deed from the point of view of God’s law. But some people are trying to make our state a state of sin.”

“Today they tell us that God did not create man and woman, driving the idea from the minds of our children. Every man can easily become a woman, and every woman a man. Do you know why they are doing this?” His Eminence rhetorically asked. “They want to ensure, at any cost, that homosexuals will be able to adopt children,” he answered.

“I ask the politicians who voted for this law to stop coming to church and deceiving us, just to get the people’s votes. Why do we need them?” he emphasized.

Abp. Ieronymos also criticized House Speaker Nikos Voutsi, who called for a separation of Church and state. “Have you considered what the role of the Church is, not only in Europe but the entire world?… The [Church] has more to offer than all [the country’s] embassies,” he said.