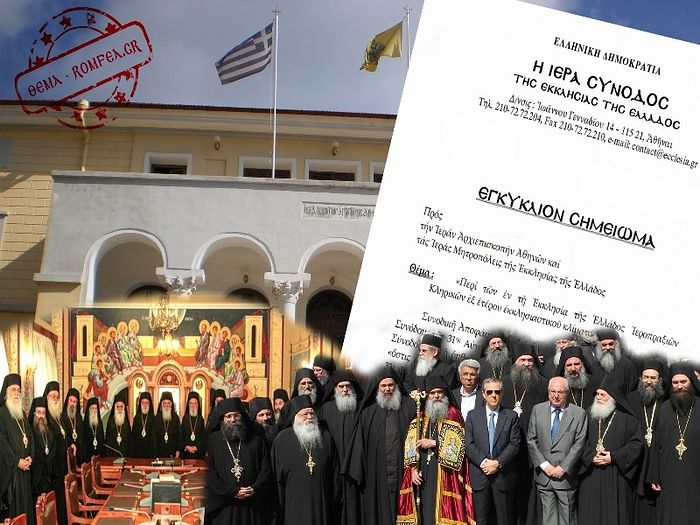 The Holy Synod of the Greek Orthodox Church met yesterday under the presidency of His Beatitude Archbishop Ieronymos of Athens, addressing, among other things, the sex-change bill that was recently adopted by the Greek parliament upon first reading, reports Romfea.

The bishops are closely monitoring the intense debate surrounding the bill, which is causing an upheaval in society and in the Church. To this end, it submitted its views in lieu of an open consultation to a representative of the relevant parliamentary committee.

As previously reported, in accordance with the new “On the Free Change of Sex” draft law, it is enough to simply provide a written declaration in order to receive a legal change of gender.

As an expression of the Church’s love for the people, and in view of the forthcoming debate in the House, the Synod expressed its basic positions on the issue:

1. Sex is a sacred gift to man and serves as the basis of psychosomatic complementarity in the mystery of life and love. In this sense, it is not eligible to be changed, but is a Divine gift to man to be used in his sanctification.

2. The Synod considers that the case-law of Greek courts covers, where necessary, existing problems, given that gender is neither freely chosen nor altered at will, but is determined on the basis of anatomical, physiological and biological characteristics which define the identity of a man as established by medical reports to the court. The law can't be content with just the scientifically unsubstantiated statement of the citizen, which may later be changed.

3. The proposed bill arouses emotions in society, attacks the sacred institution of the family, contradicts good morals and common sense and destroys man. Instead of diminishing confusion and mental disorders, it will increase them and give rise to a dangerous social phenomenon, especially when it creates an explosive situation in schools as well.

4. The Synod does not see behind all these efforts an interest in the afflicted and wronged fellow man, but the existence of powerful groups, resulting in the dissolution of social cohesion and the spiritual death of man.

5. The Synod makes a final appeal to the political world as a whole to lift its responsibility and mission beyond political ideals, prejudices and the invocation of uncontrolled rights, to withdraw the bill, to show similar interest in solving the most serious problems which plague our society, our nation and the people, and instead of strengthening tension, division and absurdity, to contribute to the spiritual uplifting of our citizens.

The Church surrounds all people with love and understanding indiscriminately, but always desiring their salvation must demonstrate the failure of critical decisions.

The Sacred Community of Mt. Athos has also raised its voice on the matter, in a letter to the Ministers of Justice and Education and Religious Affairs Stavros Kontonis and Konstantinos Gavroglou, as well as the members of the Greek Parliament.

The group of representatives of each of the 20 ruling monasteries on the Holy Mountain state they also feel the anxiety and concern of the Orthodox faith of the Fatherland over the developments surrounding the sex-change bill.

“With reference to the bill that is to be voted on, we wonder what is left for our future,” the Athonites’ letter reads.

“Today they tell us that God did not create man and woman, driving the idea from the minds of our children. Every man can easily become a woman, and every woman a man. Do you know why they are doing this?” His Eminence Metropolitan Nicholas of Phthiotis rhetorically asked. “They want to ensure, at any cost, that homosexuals will be able to adopt children,” he answered.

Metropolitan of the Greek Orthodox Church to appear before court for sharp remarks concerning sodomy
In April 2016 the metropolitan of Mantineia spoke out sharply against Greek Parliament’s adopting of the law on free cohabitation: “Worst of all is that Parliament voted for laws which call perversion and depraved couplings of people of the same sex marriage.”
Comments

Brian10/7/2017 12:08 pm
Emperor Justinian decreed immolation for sodomites, although many good Orthodox people throughout the ages have not agreed with the severity of that punishment. It cannot be forgotten that homosexual behavior is a crime against nature (see Blackstone's Laws).
×