Reservations in the Monastery Guesthouse 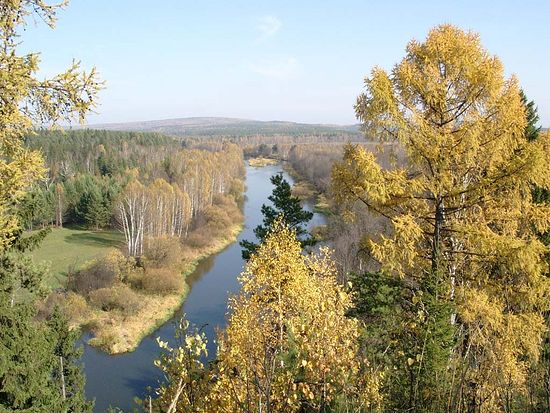 After the Liturgy the people took their time as they ambled out of the church. The sun was shining and warm, the autumn leaves were golden, and the air was especially clear—everything on that day in October was festive, as if nature itself was rejoicing on the day of St. Sergius of Radonezh.

After trapeza Igumen Sabbatius, though very tired, couldn’t get to his cell for a long time—pilgrims were crowding around the refectory, some waiting for a travel blessing, others needed advice, others just wanted to express their congratulations with the feast.

“Batiushka, when do you bless me to go to Moscow?”

“Fr. Sabbatius, I need to talk with you—big problems at work…

“Batiushka, can I get your advice about a building project?”

And amidst the numerous male basses and high female voices came the unexpected ringing voice of a child, the nine-year-old daughter of a pilgrim, wearing a pink cap.

“Batiushka, St. Sergius is my favorite saint! I ask him for things, like, well… at school, and he always helps me! And what do you think of him? Has he ever helped you?

Fr. Sabbatius smiled, “I have enormous respect for him!”

He blessed, listened, advised, congratulated, and said good-bye. With difficulty he ascended the squeaky stairway to his cell. Finally he was alone. There was still much to do that day. He had to rest, gather strength… he sat down in the old armchair. Has St. Sergius ever helped him?..

Beyond the window was a distant panorama, wonderfully seen from the height of Miteinaya Hill—dipping fields and woods touched with gold, the Chusovaya River, cold, autumnal, and gray. Fresh air slightly bitter from the mouldering leaves seeped through the window, along with the smell of smoke from bonfires. The sunlight sparkled gaily along the window pane.

Back then, almost thirty years ago, the same pale sun shone through the window of the train, it was one of the last sunny autumn days, and the yellow, red, and golden colors of the forests and fields flickered by. He had not yet received the monastic tonsure and wasn’t Igumen Sabbatius, but a young, recently ordained priest. He was gradually getting used be called “Fr. Sergius” instead of just Sergei, and learning how to be a pastor. 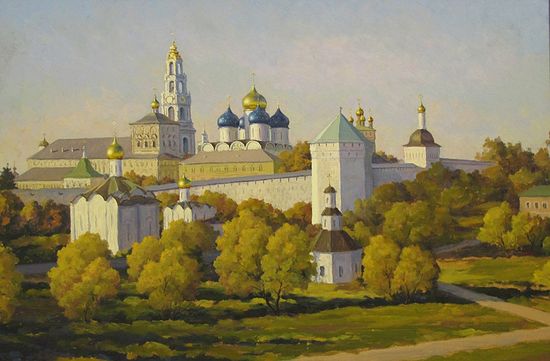 At his just over twenty years he felt very mature. He wasn’t just travelling; he was bringing his younger, fifteen-year-old brother to St. Sergius of Radonezh.

His spiritual father and instructor, Bishop Athanasius, blessed him for the trip, gave each of them a fatherly kiss on the crowns of their heads and sent them off with God. They bought two train tickets, and were happy and joyful as they rode, the two brothers.

Sergei had gone to church from a young age; his grandma—dear grandma, memory eternal!—was a humble woman of prayer. Accustomed to church from childhood, he still went as a teenager, a youth; he left home early to become a subdeacon for Vladyka, then a deacon, and at just a little over twenty, a priest.

But his brother was born seven years after him and there was no one to accustom him to church. The young priest felt a responsibility for the lad, he wanted to give him a taste of the faith, show him the Orthodox holy sites, and pray with and for him at the relics of St. Sergius of Radonezh.

He was very anxious, as people usually are anxious when they want to share something very special. He so wanted that his brother should feel the grace of the Lavra, its spirit, holiness, and so that he would understand why St. Sergius is so dear to him, so close. He wanted it all to go without any of the usual feast day and pilgrimage temptations that he was already used to, but which could become a stumbling block for his little brother who was so young and inexperienced. He wanted that no one should offend him or spoil the feast day, that there would be no crabby old woman or a monastery laborer, zealous not according to knowledge. And he wanted there to be a room in the guesthouse…

The Holy Trinity-St. Sergius Lavra greeted them with the peal of bells carrying far away in the transparent October air. At the threshold of the great feast a multitude of pilgrims and clergy had arrived at the monastery—venerable old archpriests and hieromonks, reputable igumens, and archimandrites no longer young. All the guesthouses turned out to be full.

The sun was shining but a cold wind made them shiver a bit; the daylight quickly waned, and the autumn dusk frightened them with the possibility of remaining outside without a warm roof over their heads. He worriedly looked at the tired boy, and took him resolutely by the hand. Behind the Holy Trinity Cathedral, in the monastery wall, was an old, darkish guesthouse with narrow windows and large dormitory-style cells.

A laborer was at the reception and he said straightway, “Forgive me—no room.”

He looked at them attentively, softened, and added, “Well, there are two spots free, but I can’t put you there—they’re reserved for a priest and his brother. Leave your things here, go to the refectory, then to the evening service, and after the service come here again. Father guest master will come then, maybe he’ll think of something.”

Fr. Sergius thought, “Probably the reservation is for some venerable archpriest.”

They went to the refectory, then to the service, and prayed. They returned to the guesthouse and found the guest master father. The aged, gray-haired monk looked attentively at the travelling clothes of the young priest, at his trench coat, his cassock, which many church persons wear—from novice on up to bishop, and asked, “Who are you?”

“It’s you we’re expecting! Come over here, two places for you!” 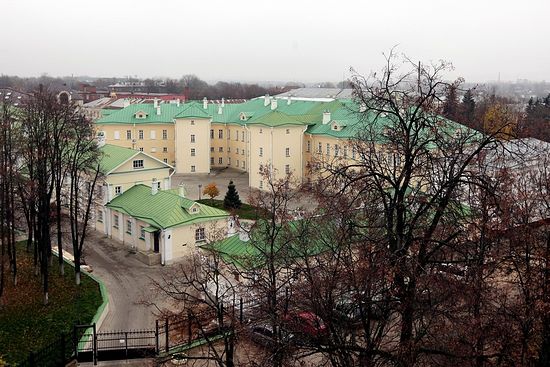 The guesthouse of the Holy Trinity St. Sergius Lavra.

They were wonderfully appointed, and spent the night. In the morning they went to St. Sergius, and it was all just as they had dreamed. They received Communion. Their souls were filled to the brim with joy! His brother was shining.

Only, one thought troubled batiushka, that they had taken someone’s else’s place, a place that was not meant for them. But no one else came, no venerable archpriest arrived, no one claimed the reservation in the monastery guesthouse, no one kicked them out, and they lived in that wonderful cell until their departure.

Before departing they went to thank father guest master. Batiushka couldn’t restrain himself and asked, “Father, forgive me, you gave us the places that were supposed to be occupied by a priest and his brother. Who were they?”

The monk smiled enigmatically, “Why, it was you!”

“This is St. Sergius’s home—he is the one who arranged it! He arranged it so that the Lord revealed to one of the Lavra’s fathers that you were coming. They informed me of it: Two people will come, a priest and his brother. I said, how will I know if it’s them? They said, ask and you’ll recognize them. And you came!”

This was a miracle of God that touched them to tears, sent to strengthen the the faith of the young priest and his neophyte brother.

Holy Father Sergius, pray to God for us! A Wreath to St. Sergius of Radonezh
Fr. Sergius Bulgakov

A Wreath to St. Sergius of Radonezh
Archpriest Sergei Bulgakov
Five and a half centuries have passed since the blessed repose of St. Sergius. The changes that have occurred in everything are great, and great is the historical distance that separates us. However, he still remains not only our spiritual leader and heavenly intercessor but also a friend who measured the depths of our sorrow and through it became our kin.